England is hosting the Women’s European Championships again. 17 years after Euro 2005 took place on these shores, the tournament returns, but this time, it is almost unrecognisable from the event we saw in the mid-noughties.

Back then, women’s football barely registered on the public’s consciousness. The Euros was made up of just eight teams and took place solely in the north-west, as England manager Hope Powell described the women’s game as ‘a second-class sport. Although 29,000 turned up for the opening game, tickets for adults were flogged for a fiver and the knowledge around these part-time footballers was minimal.

Now there is an established professional top division, a Panini sticker album for the tournament and club tournaments such as the Champions League aligned with the men’s season. England’s opening game at Old Trafford is a sell-out with over 70,000 fans heading to Manchester, while the final at Wembley should attract over 80k.

This is an unprecedented level of women’s football attendance in this country and in recent years, the WSL sides have experienced playing in major stadiums. Crowds of over 30k have gathered to watch the likes of Manchester City and Tottenham Hotspur and the interest in club football in this country is growing. As the ‘big six’ in the men’s game will all compete in the WSL for the first time next season, this interest and intertwining with the men’s teams is only set to rise.

Back in 2005, Bradley Walsh was wheeled out to sell tickets on the cheap. Now its difficult to get into any of England’s group games, with prices for top tickets reaching £50. It’s only been 17 years but we are a world away from the event we saw back then. 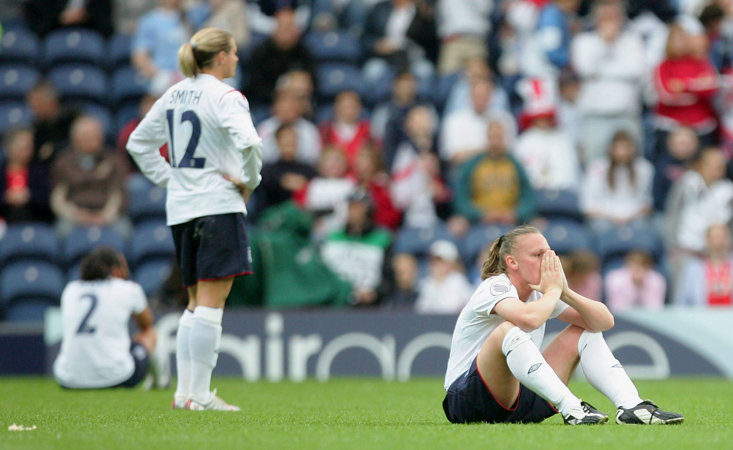 At Deepdale, as France played Italy in the group, just 957 fans turned up. Only 3,000 fans in total turned up in Preston over three group games, as the tournament of low quality was played in front of a hollow atmosphere. Even the two semi-finals only amassed a crowd of 8,400 fans combined - a figure that should be blown out of the water by just one match at this year’s tournament.

Five of the 15 games failed to attract crowds of 2,000 and there was huge controversy ahead of the final when UEFA president Lennart Johansson said: "Companies could make use of sweaty, lovely looking girls playing on the ground, with the rainy weather. It would sell."

These sexist comments came just one year after Sepp Blatter had said the players should wear “tighter shorts” to attract bigger crowds. Although it feels as if we have moved on since then, it is only four years since Ballon d’Or winner Ada Hegerberg was asked to twerk on stage, so there is still plenty of work to be done when it comes to fully embracing women in football.

Although Euro 2005 was not a rampant success, this tournament did spark something amongst the English fans. An audience of 3.5m tuned in to watch their final group game and despite a group stage exit, there was enough of a spark generated to inspire the generation of female footballers we see today. They say ‘If you can’t see it you can’t be it’ and for many girls, this was their very first chance to watch women play football.

That seed of promise that we saw in England’s opening game back in 2005 has grown rapidly into something amazing. This time in packed out stadiums, these elite athletes will be treated like the stars they are - and in doing so, the next generation of talent will be truly inspired. Euro 2005 was just the beginning, but Euro 2022 is far from the end. England, your time is now.