Football
News
Ralph Hasenhuttl's were forced to play for more than 80 minutes with ten men after another controversial red card
Kieran Spratt
22:41, 30 Apr 2021

Southampton earned a priceless point against high-flying Leicester City in a hard-fought 1-1 draw on Friday night, despite being reduced to ten men with more than 80 minutes left to play at St Mary’s.

For Brendan Rodger’s Leicester, with the chance to move ten points clear of fifth-placed West Ham in the race for Champions League football, it was an opportunity missed. The Foxes stay third, eight clear of West Ham, but still need three more wins to guarantee a spot in that all-important top four.

"A little frustrating, I don't think we did enough to win the game. A great opportunity against 10 men and we're normally very good at that. Give credit to Southampton, they defended deep and compact but we're disappointed,” Rodgers told Sky Sports.

"When we get back in again on Monday it is another point towards where we want to go. We've now got four games to go. We're in a brilliant position."

The Saints were dealt a major blow with just 10 minutes on the clock when centre-back Jannik Vestergaard was given his marching orders after catching Jamie Vardy high above the ankle, though he did seem to get the ball first. James Maddison’s subsequent free-kick flashed just wide, but Ralph Hasenhuttl’s men had a mountain to climb.

It was the second-quickest Premier League red card of the season, and given Southampton had suffered a similar fate against Leicester in 2019, when Ryan Bertrand was sent off after just 12 minutes, Saints fans must have been dreading a repeat of that 0-9 drubbing.

Fortunately, despite their game plan going out the window so early on, Southampton were imperious throughout, digging deep and only giving the Foxes rare glimpses at goal. Against all odds, it was the home side who broke the deadlock on the hour mark. The ball struck Kelechi Iheanacho’s arm in the Leicester box and James Ward-Prowse duly fired home the subsequent penalty into the bottom corner past Kasper Schmeichel. 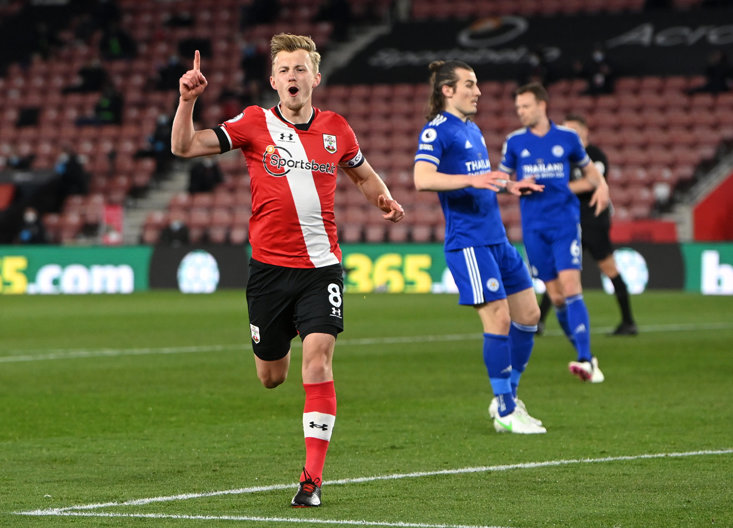 Any chance of a famous Southampton win evaporated just six minutes later when Leicester's pressure finally gave way. Iheanacho, atoning for giving away the penalty, caught Jonny Evans with a wonderfully flighted ball into the six-yard box, where the Northern Ireland international did enough to glance in the equaliser.

Speaking after the match, Southampton boss Hasenhuttl said, "The way we defended today was more committed and more deserved because the red card for me was not a red card.

"Absolutely [it changed the game]. He played the ball back to the goalkeeper. Jamie Vardy never had control of the ball. The explanation was he had a clear goalscoring opportunity but for me it is not a clear goal chance.”