By the time Fernando Torres broke clear and cut the ball back for fellow substitute Juan Mata to slide home goal number four, it had become a procession. Italy, beaten and bloodied, playing with 10 men for the final half an hour due to an accumulation of injuries, were clearly second best. But then everyone was second best to Spain at that time.

As Iker Casillas lifted the Henri Delaunay Trophy aloft in Kyiv after Spain’s 4-0 win in the Euro 2012 final on July 1, 2012, the rest of the world was left wondering whether La Roja would ever be stopped. A second straight European Championship win and a third consecutive major title marked them out as the dominating force of international football, and they seemed ready to keep going and going.

Little more than four years earlier, they had been at the other end of the scale. Without a tournament success since Euro ’64, Spain were up there with the likes of England, Netherlands and Portugal among nations who often threatened to be a serious contender but regularly found ways to fall short.

·  How Zidane rocked my world

·  When Ronaldo cemented his legacy at World Cup 2002

But at Euro 2008 their luck began to change with a significantly symbolic penalty shootout win over Italy in the quarter-finals. You see, Spain had a thing about the date June 22nd which was inextricably linked with failure. Specifically, penalty failure.

At the 1986 World Cup, Euro 96 and the Korea/Japan World Cup of 2002, Spain had fallen in the quarter-finals. All of them on penalties. All of them on June 22nd. So when they were paired with Italy – who they hadn’t beaten in a tournament game of any kind since the 1920 Summer Olympics – on June 22, 2008 in the last eight in Vienna, there was little optimism that their fortunes were going to change. And, of course, it went to penalties.

But when Cesc Fabregas slammed home the winning spot-kick and ended a trio of ducks, the weight of the world was lifted from their shoulders. Just as many Manchester United supporters treasure their Champions League semi-final comeback win over Juventus more fondly than the final itself in 1999, Spaniards often will point to that shootout win as the defining point of 2008 rather than the 1-0 final success over Germany a week later which ended their 44-year trophy drought. 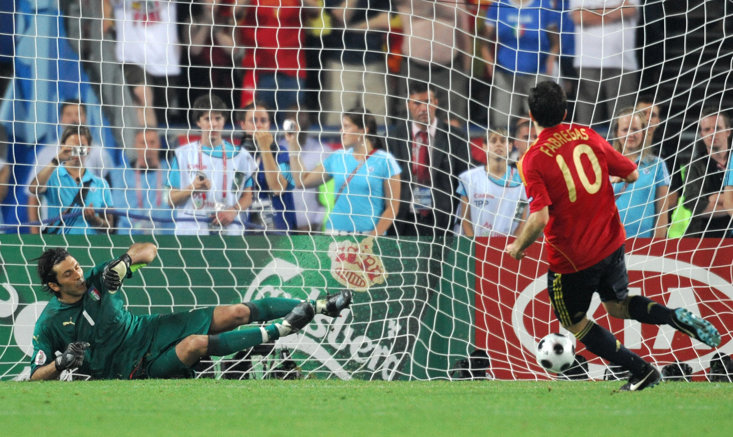 Two years on they were making history by becoming the first team to win the World Cup after losing their opening group game. It wasn’t the most convincing of runs, with Vicente del Bosque’s side beating only Honduras by more than a single goal and edging 1-0 victories in all four of their knockout matches, but it was further evidence that they were the team to chase in international football.

By the time the 2012 European Championship came around, not only were Spain the team to beat but Barcelona were also the premier club side in the game. Del Bosque took seven Blaugrana stars with him to Poland and Ukraine, and the five Real Madrid players in his 23-player squad also came with immense pedigree.

A team containing the likes of Casillas, Gerard Pique, Andres Iniesta, Pedro Rodriguez, Xavi Hernandez, Fabregas, Xabi Alonso and Sergio Ramos was always going to be difficult to stop, and only Portugal in the semi-final really got close to doing so. Again they were taken to penalties, again Fabregas netted the decider.

The final wasn’t always the procession the 4-0 result would have you believe, with the Azzurri giving as good as they got for long spells until their 10 men ran out of steam in the latter stages, but there was never any real doubt as to who was going to win. Then, as in the two tournaments before, they were simply too good for their opposition.

No other European team has ever had quite the same hold over international football for such an extended period. No other nation has transferred a club’s footballing philosophy so effortlessly as Spain were able to adopt Barcelona’s tiki-taka. They were not only dominant, they were great to watch too.