Billy Wright’s appearance against Scotland at Wembley on April 11th 1959 not only made him the first England player ever to win 100 caps for his country, he also became football’s original centurion - eventually being joined by some of the game’s greatest talents.

The match itself didn’t quite do justice to such an astonishing feat, with a second-half strike from Bobby Charlton securing a rather forgettable 1-0 victory for the home side, but it was Wright's achievement that rightly made all the headlines as his teammates carried him victoriously around the pitch at the end of the game.

Wright established himself as one of the most iconic figures in Three Lions history during his 20-year playing career, initially setting England's all-time appearance record in 1952 when he required just 42 caps to break the 38-year record held by Bob Crompton - something which makes his achievement of over 100 caps even more incredible.

Making his England debut in a 7-2 win over Northern Ireland at Windsor Park in 1946 he would go on to skipper his country 90 times, a record that he still shares with 1966 World Cup winning skipper Bobby Moore to this day.

Despite being only 5ft 8inches tall, which even then was unusually small for this position, he excelled for both club and country, combining a keen sense of anticipation with determined tackling and an impressive aerial ability for a man of his stature to become a powerful defender. 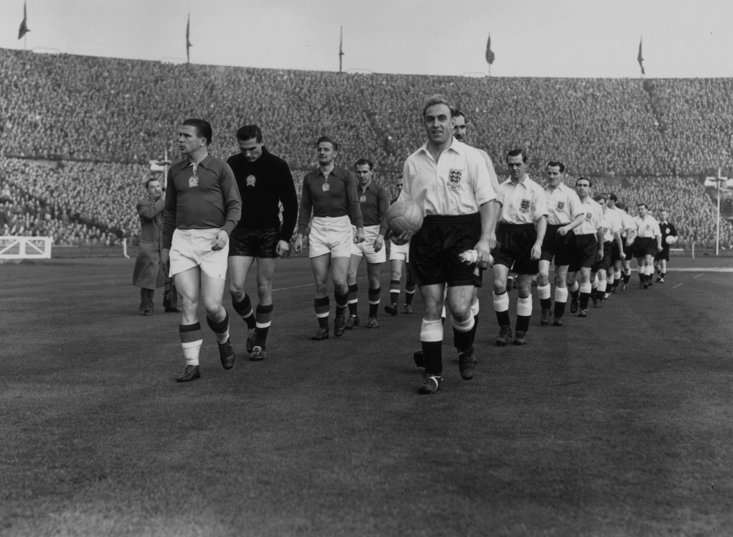 Born in Ironbridge, Shropshire, in 1924 he joined Wolves in 1938 with then-manager, Frank Buckley, initially thinking Wright was too small to have a career in the game, but he saw enough in the young player to hand him his debut as a 16-year-old in a wartime match in 1939.

And he would be proved correct as Wright went on to captain Wolverhampton Wanderers during the club’s glory years of the 1950s, leading them to three league titles and an FA Cup in 10 years as Wolves became one of the leading clubs of the day and rivals to Manchester United’s Busby Babes.

Between 1950 and 1959 Wright only missed 31 games for the Old Gold and in many ways, his resolute, spirited and direct approach epitomised the club's qualities and style during that most glorious of periods at Molineux.

But Wright himself preferred to lead by example, once saying, "I decided early on that captaincy is the art of leadership, not dictatorship. Respect is the hardest thing for a captain to come by and the easiest to lose. I never changed my mind about this."

Wright’s marriage to Joy Beverly of the Beverly Sisters meant that he was as well known off the field as he was on it, with the duo becoming one of the first celebrity couples of the day, in the way that has become very much the norm for players of the modern era.

By the time he hung up his boots in August 1959 he had played for his beloved Wolves 490 times but it would be the 105 appearances for his country which would make him a household name around the world at a time when such an achievement was almost unthinkable.

Following his retirement he was appointed England youth team manager in 1960 and then the manager of the under-23 side before taking charge of Arsenal in May 1962 - a position he retained until June 1966.

After leaving management, he pursued a career as a television pundit before being appointed Head of Sport for ATV and Central Television, eventually leaving broadcasting in 1989 to return to Wolves as a director.

Wright was awarded a CBE for his services to the game though the knighthood most football fans believe he so deserved never came his way despite a campaign for him to receive one posthumously following his death in 1994.

His tally of England appearances may have been overtaken by the likes of Frank Lampard, Ashley Cole, Bobby Moore, David Beckham, Steven Gerrard, Wayne Rooney and Peter Shilton, but becoming the first player in the world to play 100 games for their country is something that can never be taken away from Billy Wright.