Football
News
The Arsenal star hit a major milestone this weekend, but could still depart this summer
Conor Keane
12:11, 07 Mar 2022

We are running out of superlatives for Vivianne Miedema. The amazing Arsenal striker has made more history in the Women’s Super League this past weekend in the 4-2 victory over Birmingham City.

Having scored against the Blues on Sunday, she has now been directly involved in 100 goals in the WSL - becoming the first player in history to reach that feat. Her calm and composed first-half strike at Meadow Park doubled the Gunners’ lead against the bottom-of-the-table Blues. Jonas Eidevall’s side now hold an eight-point lead over title rivals and reigning champions over Chelsea which could prove to be crucial at the end of the season - although Emma Hayes’ side have three games in hand.

Miedema is the leading goalscorer in the league with ten and time and again she continues to prove how much of a coup her capture was in 2017 from Bayern Munich. Her 100 WSL goal involvements consist of 70 goals and 30 assists which are just astounding numbers and her legacy in this division is going to be long-lasting.

What is even more impressive with her century of goal contributions is that it only took her 83 appearances to reach the milestone - which means the striker averages more than a goal and an assist every game. The Dutch international’s future in north London remains uncertain and it seems like her exit could be edging closer as the season’s end approaches. It had already been reported earlier in the season that the 25-year-old has held talks with both European giants Barcelona and Paris Saint-Germain over a summer switch, but in this scenario, nothing is official.

She is already the highest goalscorer in the league’s history and now she has added another jaw-dropping record to her five-year career in England. Her boss Eidevall was full of praise for the forward following her achievement. He said after the match: “So much history today. It’s obviously huge and I don’t think she’ll (Miedema) personally care about it because she’ll care about the next game and how to help the team be as good as possible but obviously it’s a result of all the great things she has been doing in the WSL since she arrived here so we’re of course really proud and happy to have her.” 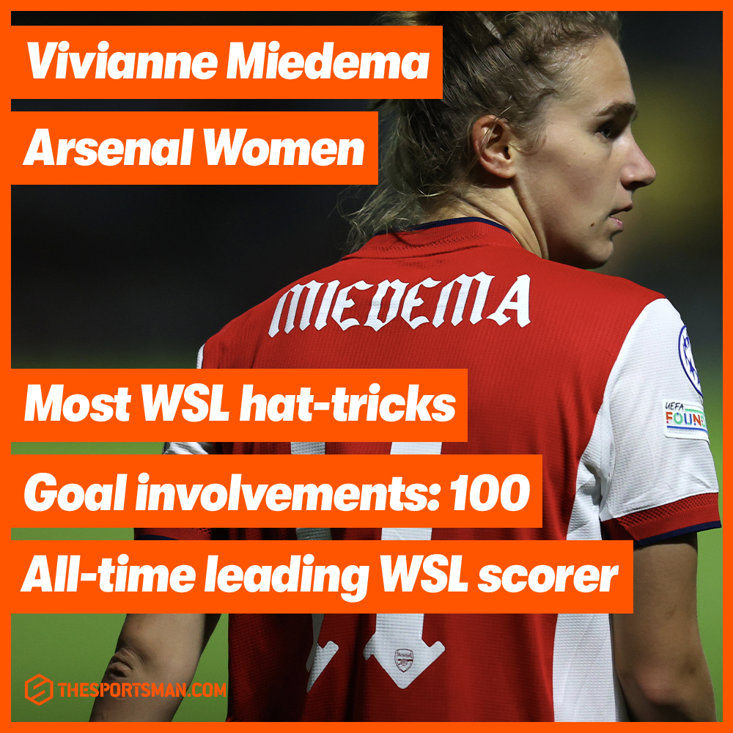 Although naturally a centre-forward, this was the third game that Miedema was deployed in the number 10 role, and she continues to shine on the pitch no matter the position she plays. She is a potent goalscorer and she can now add this record to her already impressive collection, which includes the most goals in a single campaign (22 in 2017-18), more hat-tricks than any other player in WSL history (five), and most goal involvements in a single game (10 in Arsenal’s 11-1 victory over Bristol City in 2019).

Her record speaks for itself, and if she were to move on at the end of the year, it would unquestionably be a huge blow for the Gunners because they simply could find a replacement that would be as effective as her. With her future uncertain, her contract situation is very similar to the Gunners’ men’s forwards Alexandre Lacazette and Eddie Nketiah, who both find themselves in the same situation as Miedema. Arsenal are giving themselves a significant problem heading into the summer if they need to effectively replace their forwards across both teams which is difficult when you only need to bring in one goalscorer, let alone potentially three.

Regardless of the question marks surrounding Miedema’s next career step, she is a top professional who will continue to deliver her absolute best for the Gunners this term as she hopes to claim her second WSL league title and help fire Arsenal to glory in the Champions League.