Virgil Van Dijk is marking his one-year anniversary as a Liverpool player with his side top of the Premier League tree going into the New Year.

12 months ago today, Liverpool finally got their man, six months after making an illegal approach for the Dutchman and purportedly ‘ending all interest’ in the then-Southampton centre-half.

An autumn, half-a-winter, and £75million later, Van Dijk became the most expensive defender in the history of football. Van Dijk’s fee remains £23million more than the next on the list, Manchester City’s perpetually injured Benjamin Mendy. That’s one whole Phil Jones worth of difference.

A look back on some of the reactions collected by BBC Sport at the time showed how astonishing the fee to bring yet another player from Saints to Anfield was.

That’s Alan Shearer there. Talking to Radio Five Live after the deal was made.

were just some of the collected responses in the aftermath of the stunning move.

What a difference a year makes. Liverpool are now six points clear of their nearest title challengers, Manchester City and Tottenham Hotspur.

The bookies have finally made them odds on favourites to win the Premier League with the Reds hoping to end a near-three decade long wait for the title. Furthermore, Liverpool centre-back Van Dijk (and no doubt future captain) is favourite (Evens – betfair) in the running to become the PFA Premier League Player of the Year, following teammate Mohamed Salah’s 2017/18 win, in what would be back-to-back accolades for players from the club since Kenny Dalglish and Ian Rush in 1982/83, 83/84.

Gobsmackingly, with his move last year Van Dijk became the sixth Southampton player signed by Liverpool since 2014. The other collective are Sadio Mane (£34m), Adam Lallana (£25m), Dejan Lovren (£20m), Nathaniel Clyne (£12.5m) and Rickie Lambert (£5m). That’s a cumulative total cost of £171.5m that Liverpool have showered on the south-coast club in pursuit of the title.

Despite the fanfare from his arrival on Merseyside Virgil Van Dijk would have to wait until 22nd January 2018, a good three weeks after initially signing, to make his Premier League debut for the Reds, although it’s a match he won’t look fondly upon; a 1-0 loss to Swansea City. The following match against Huddersfield, the £75million man was to be found on the bench. Liverpool won 3-0.

Since then, however, his effect on Jurgen Klopp’s side has been nothing short of remarkable.

In the second half of last season, Van Dijk’s presence after moving north helped Liverpool obtain seven clean-sheets in 14 matches, a shutout rate of 50%.

This season, after 19 matches, Liverpool have leaked in just seven goals. By the same point last campaign after the same amount of fixtures they had conceded 23.

21 goals conceded in the first half of 2017 (19 fixtures) meant Liverpool recorded 44 goals in the Premier League calendar year from 38 games up until this point last year (1.16 goals per game).

Minus the two games Van Dijk originally missed following his move (Burnley and Man City), where Liverpool conceded four goals, plus the Huddersfield win he was benched for, that’s 17 in 33 games the Dutchman has helped his side record (0.51 gpg).

In 2018/19, positioned in front of summer buy, goalkeeper Alisson - himself temporarily the most expensive player in his position - and flanked by arguably the best full-backs based on form in Andrew Robertson and Trent Alexander-Arnold, Van Dijk is a domineering figure in the imposing new-look Liverpool back line.

So far, Liverpool have kept a remarkable 12 clean sheets out of 19 Premier League matches; four more than joint-second place in the category Manchester City and Chelsea.

It’s looking increasingly likely, with Van Dijk at the heart of defence, Liverpool are on the road to emulating their North West rivals Manchester United and winning the title for the 20th time.

That is no doubt, £75million well spent.

The Sportsman
@TheSportsman
👀 Tony Cascarino: "The Premier League has had some great central defenders, John Terry, Tony Adams, Rio Ferdinand. Van Dijk may turn out to be better than all of them”
Big claim
#LFC 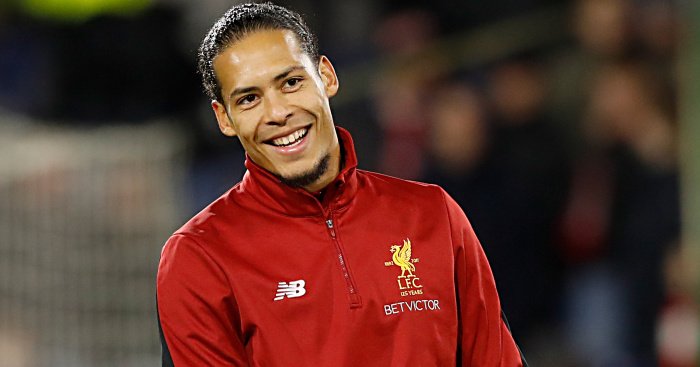 0
35
x
Suggested Searches:
Manchester United
Liverpool
Manchester City
Marcus Rashford
Premier League
More
football
Chelsea's Brick Wall Defence Could Crumble If They Don't Tie...
Antonio Rudiger has been a gladiator for Chelsea ever since Thomas Tuchel took over at the club. He [ ... ]
football
Ole, Mikel and Frank: The Era Of Club Legends As Managers Is...
In December 2019, there were three Premier League managers who could be considered legendary ex-players [ ... ]
football
Fifty For Fran: Kirby Has Come A Long Way To Reach England Milestone
England travel to Latvia for their fourth World Cup qualifier on Tuesday, and it could be a landmark [ ... ]
football
Tuesday 26th October 2021 Football LIVE Blog
Welcome to The Sportsman's LIVE football blog, where we will be bringing you all the biggest updates [ ... ]
football
Why 'Short-Term' Manager Antonio Conte Can Be Manchester United's...
Ole Gunnar Solskjaer is on the brink, and it leaves Manchester United in a perilous situation. They [ ... ]
football
What Next For Manchester United And Ole Gunnar Solskjaer After...
It was a bleak afternoon at Old Trafford as Manchester United were humiliated by bitter rivals Liverpool [ ... ]
football
Why This Liverpool Defeat Is Different For Manchester United...
A humiliating five-goal defeat to one of their closest rivals - Manchester United have been here before. [ ... ]
football
Euro Football Round-Up: Madrid Win Classico, Napoli Stay Top...
In a weekend which saw Jose Mourinho sent off – we know, big shock eh? – and Real Madrid [ ... ]
football
LIVE Football News: Follow Monday's Latest, Including Man Utd...
football
Living La Liga Loca: How Luis Suarez Made The Very Most Of His...
On this day in 2014, La Liga was graced with the highly-anticipated arrival of Luis Suarez as he made [ ... ]
football
Sensational Salah Gives Man Utd A Hiding, And Liverpool's Board...
Mohamed Salah is unquestionably the best player in the world right now. With a hat-trick in the 5-0 [ ... ]
football
Embarrassingly Inevitable - Time For Changes At Man Utd After...
It was shambolic, painful, embarrassing and everything in between. But more than anything it was entirely [ ... ]
football
100 Up For Alfredo Morelos, Rangers' Flawed Goalscoring Genius
Many observers of Scottish Premiership might at one time have had Alfredo Morelos down to reach 100 [ ... ]
football
Michail Antonio Is The Different-Maker As West Ham Outlast Wasteful...
Michail Antonio did it again on Sunday. The West Ham striker’s second-half strike was enough to [ ... ]
football
Man United's Midfield Is The Most Obvious Problem In Football
Even the wins don’t quieten down the criticism of Manchester United’s midfield. Fans and [ ... ]
football
How Brentford Have Quickly Become Part Of The Premier League...
It’s fair to say Brentford have quickly become an accepted part of the Premier League furniture. [ ... ]
football
Best In The League? Foden-Inspired Man City Hit Four Past Brighton...
Are Manchester City the best side in the league? Current Premier League leaders Chelsea would have something [ ... ]
football
Hat-Trick Hero Beth Mead Rescues Lionesses In Historic Win At...
It was far from the perfect performance in front of goal. England’s wastefulness nearly cost them [ ... ]
football
Why Mo Salah Is Outshining Cristiano Ronaldo As The Premier...
This weekend sees the fires stoked in the great rivalry between Manchester United and Liverpool as the [ ... ]
football
Academy Graduates Shine Bright As Chelsea Score 7 Past Woeful...
Chelsea remained at the top of the Premier League table after a trio of academy graduates got on the [ ... ]
football
LIVE Premier League Updates: All The Action From Saturday's...
The Premier League is back once again with another packed Saturday full of action and we will be covering [ ... ]
football
Gilmour’s Lack Of Playing Time At Norwich Is A Cause For Concern...
Chelsea fans are not best pleased right now. And it has nothing to do with the goings-on at their club, [ ... ]
football
Ellen White On The Brink Of History As Lionesses Welcome Northern...
When England host Northern Ireland in their Women’s World Cup qualifier on Saturday, all eyes [ ... ]
football
Arteta's Arsenal Continue To Click In Solid 3-1 Win Over Aston...
Arsenal would have looked at tonight’s clash with Aston Villa as a potential banana skin. The [ ... ]
football
Martinez Finally Getting His Chance To Shine After Years Of...
When Emiliano Martinez was an Arsenal goalkeeper he played more league games for Reading than he did [ ... ]
football
The Cherries Look To Have Found Their Identity Again Under Scott...
It was only six years ago when AFC Bournemouth completed their fairytale promotion to the Premier League. [ ... ]
football
LIVE Football News: Europa League Reaction & Arsenal v Aston...
Thursday night had a bit of everything, with a record-breaking defeat for Jose Mourinho's Roma, [ ... ]
football
When ''Arsene Who?'' Changed The Face Of English Football
“Arsene Who?” asked a headline in the London Evening Standard, while one columnist said [ ... ]
football
Hammers Show Their Quality Against Genk While Rangers Brush...
West Ham United showed their quality in Europe again as they comfortably brushed aside Genk 3-0 at the [ ... ]
football
Spurs Look Directionless As They Fall To Europa Conference League...
It was a disappointing night for Tottenham Hotspur in the Europa Conference League as they came away [ ... ]