As Covid-19 restrictions move ever nearer to being lifted, we have seen the slow return to normality within sport, with crowds being welcomed bit-by-bit to events already and capacity attendances set to become more normal once again after 19 July.

This weekend sees the British Grand Prix take place at Silverstone, featuring the all-new F1 Sprint on the Saturday. The famous circuit is set to welcome 140,000 spectators across the weekend as part of the UK Government’s Event Research Programme (ERP), which is overseeing a range of pilots testing the return of fans.

The Grand Prix crowd will be the biggest the UK has seen since the start of the Covid-19 pandemic, but here’s how other sports have gradually brought spectators back to their events over the past few months.

In December 2020, crowds of up to 2,000 were allowed in football stadiums if the region was in tier 1 of Covid-19 restrictions. It did not last long as, by the end of the month, the country was once again plunged into another lockdown.

The Carabao Cup final was used as a pilot event in April 2021 as Tottenham Hotspur and Manchester City each had 2,000 fans in attendance at Wembley Stadium.

Following the May 17 lifting of restrictions, stadiums were allowed to welcome up to 10,000 supporters (home fans only) for the final two rounds of the Premier League, while the FA Cup final between Chelsea and Leicester City welcomed 20,000 spectators to give the UK a glimpse of what we could expect when football returned to normal.

Wembley welcomed 22,500 supporters for England’s opening Euro 2020 group stage match against Croatia and the same number attended the following games against Scotland and Czech Republic. The crowd increased to 41,000 for the two round of 16 clashes held under the arch and more than 60,000 fans were able to attend the two semi-finals and then the final between Italy and England.

The final will have featured more supporters as there were some hooligans who forced their way into the stadium without tickets and with no regard for the Covid guidelines and social distancing, which may well have caused a rise in cases. There were increased numbers of positive tests in Scotland following their fans’ trip to London during the group stage, which raised eyebrows regarding the plans to increase the crowd limit as the tournament progressed.

Ahead of the 2021-22 season, stadiums are to return to full capacity as it stands, but with the unpredictability of the virus that could yet change. 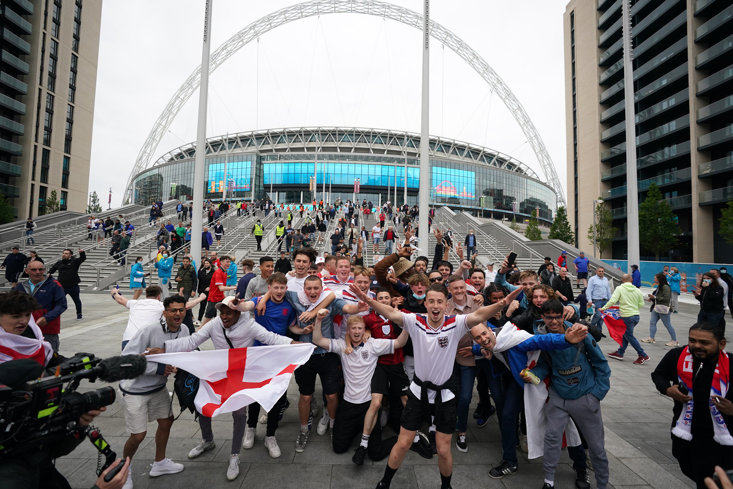 Following the May 17 lifting of restrictions, rugby league clubs were allowed to welcome fans back for the first time in 14 months at a rate of 4,000 supporters or half their full capacity, whichever was lower.

The biggest event for the sport in terms of the return of crowds will take place at Wembley on Saturday with the Betfred Challenge Cup final between St Helens and Castleford Tigers. There are set to be 45,000 fans in attendance for the sport’s most highly-anticipated day of the year.

There was a 25% capacity crowd at Queen’s earlier this summer as Brit Cameron Norrie reached the final.  And Wimbledon was able to allow 50% capacity across the grounds from the beginning of the Championships which began on 28 June. As the tournament progressed the capacity was permitted to increase to 100%, with around 15,000 present in Centre Court for the finals weekend.

Royal Ascot was used as a pilot event for testing the return of large crowds earlier this year and the huge race event was able to welcome a daily crowd of 12,000 after having to be staged behind closed doors in 2020. 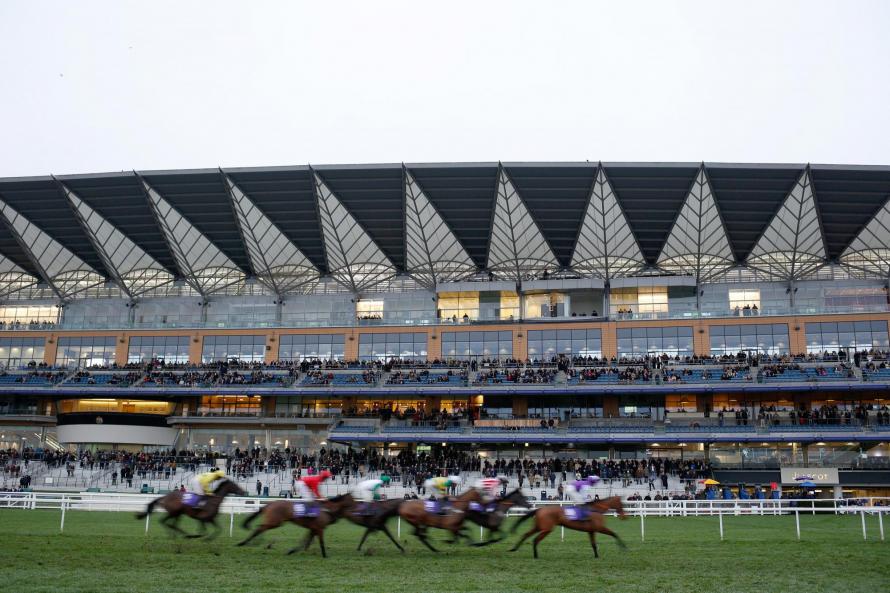 Test matches have been able to welcome back fans in 2021, with around 7,500 fans being present on each day of England’s First Test against New Zealand at Lord’s. The Second Test of the series was a pilot event, allowing 17,000 supporters to attend daily at Edgbaston.

A shadow was cast over the hopes of increasing cricket crowds when Edgbaston’s pitch was invaded by students in a match between the Birmingham Bears and Derbyshire. The students were drunk and disorderly and attended in fancy dress, failing to adhere to the guidelines set in place by going onto the playing surface and mingling against the spirit of social distancing.

As the British Open got underway this week, the tournament was allowed to welcome a daily crowd of 32,000 people, something that has been sorely missed this past year on courses across the country.

Snooker was the sport chosen to welcome back the first capacity crowd in the UK since the 2020 Cheltenham Festival, as the World Snooker Championship was able to welcome 980 spectators at the Crucible for the final between Mark Selby and Shaun Murphy.

x
Suggested Searches:
Manchester United
Liverpool
Manchester City
Marcus Rashford
Premier League
More
sports
Day Eleven Olympics Round-Up: Thompson-Herah Wins Double-Double...
An astonishing day of Olympic action unfolded in the Japanese capital as there were more golds for Team [ ... ]
sports
Mixed Events Are Here To Stay After Team GB's Tokyo Olympics...
Tokyo 2020 has seen the introduction of some new encapsulating mixed events that could be the future [ ... ]
sports
Italy Continue To Defy The Odds As Perfect Summer Continues...
There could be no such thing as the perfect summer of sport, but if there is, Italy are experiencing [ ... ]
sports
Day Ten Olympics Round-Up: GB Win Eventing Gold As Simone Biles...
Day 10 of Tokyo 2020 had plenty to offer as Team GB claimed another gold to add to their impressive [ ... ]
sports
Day Eight Olympics Round-Up: Relay Gold For Team GB Despite...
Team GB enjoyed more success on day eight of Tokyo 2020 as further history has been made in these historic [ ... ]
sports
From Dina To Daley, Here's What's In Store For Week Two At Tokyo...
The first week of Tokyo 2020 has been full of excitement and has produced some great entertainment. [ ... ]
sports
Day Five Olympics Round-Up: Mallory Franklin Takes Silver In...
Day six of Tokyo 2020 brought more excitement and Great Britain managed to pick up a few more medals [ ... ]
sports
From Raging Bull To Rudy, Ten Of The Greatest Sports Biopics...
This week saw the trailer drop for King Richard, a brand new biopic of Richard Williams, father [ ... ]
sports
Day Five Olympics Round-Up: GB Relay Team Storm To Gold & Dujardin...
Tokyo 2020 continues to thrill, with Great Britain collecting more medals on Wednesday and some high-profile [ ... ]
sports
Simone Biles Should Be Applauded For Her Withdrawal, Says Mental...
Simone Biles’ decision to withdraw from the all-around gymnastics final has been applauded by [ ... ]
sports
Day Four Olympics Round-Up: More Medals For Team GB In Best...
Great Britain has never had such a successful start to an Olympic Games. As day four comes to a close, [ ... ]
sports
Tokyo Olympics Day Three Round-Up: Team GB Enjoy A Magic Monday
It was a thrilling Monday for Team GB as the squad brought home five medals, including three golds, [ ... ]
sports
From Child Prodigy To Champion, Tom Daley Succeeds In Quest...
It has taken four Olympic Games, but Tom Daley finally claimed his first gold medal alongside Matty [ ... ]
sports
Tokyo Olympics Day Two Round-Up: Team GB Get Medal Tally Up...
There was finally some medal success for the Brits, a match to forget for the USA’s men’s [ ... ]
sports
Tokyo Olympics Day One Round-Up: Adam Peaty Through As GB Footballers...
As the sun sets on day one of the Tokyo 2020 Olympics, some of Great Britain’s finest athletes [ ... ]
sports
Is England Captain Harry Kane Worth £160m Or More To Tottenham...
Harry Kane to Manchester City. The transfer saga that looked certain to drag out through the summer [ ... ]
sports
Coronavirus Is Continuing To Play Havoc With The Sporting Calendar
The UK may have seen a considerable relaxation in Coronavirus restrictions, but the virus is still causing [ ... ]
sports
Ten Of The Greatest Ever Moments From The Olympic Games
The Olympic Games always provide incredible memories for athletes and watchers around the world and [ ... ]
sports
Jessica Ennis-Hill And The Other Home Favourites Who Won Gold...
The Tokyo Olympic Games is fast approaching and the eyes of the world will be on the Games that will [ ... ]
sports
Three Winners And Three Losers From Team GB After Tokyo 2020...
At long last, the extended wait for the start of the Tokyo Olympics is nearly over, and the hype is [ ... ]
sports
From Skateboarding To Speed Climbing, Five New Sports Making...
The Olympics are almost upon us and with a host of new sports making an appearance, our hype for the [ ... ]
sports
Ten Biggest Shocks In Summer Olympics History
Tokyo 2020 is now just a matter of days away and as we gear up to watch the greatest athletes on the [ ... ]
sports
Tony Hawk And His Legendary 900° Landing At The 1999 X-Games
The 2021 summer X-Games, the premiere competition for extreme sports, came to a close on Friday and [ ... ]
sports
Walker The Talker: Even Without Fans, The Magic Remains At The...
Well here we go then. Whatever people think about whether it could, should or would happen, Tokyo 2020 [ ... ]
sports
Neymar, LeBron James and Federer: The Big Names Missing From...
Dan Evans is the latest British omission who will miss the Tokyo Olympics later this month having tested [ ... ]
sports
Walker The Talker: Olympic Games Will Be A Test Of The Body...
The unifying power of sport. Anyone watching that epic semi-final on Wednesday night couldn’t [ ... ]
sports
Tom Stoltman Becomes First Scot To Claim World’s Strongest Man...
Invergordon strongman Tom Stoltman became the first Scotsman to hold the title of World’s Strongest [ ... ]
sports
England’s Croquet Five Lions Conquer Scotland To Bring It Home...
It was all a world away from the frenzied hype of Euro 2020 gripping the nation. But on five beautifully [ ... ]
sports
The Hulk To ‘The Mountain’, Five Monster Moments From The World’s...
Since its debut in 1977, The World’s Strongest Man has become a beloved spectacle to hundreds [ ... ]
sports
From Indy 500 To Giro d’Italia, Here Are Five Sport Stories...
It’s been a busy weekend in the sporting world and whilst most of the talk might have been around [ ... ]