Football
News
Gareth Southgate could take something from being part of the squad which looked to bounce back 25 years ago
Kris Voakes
08:01, 13 Jul 2021

It might have been a final this time around, but England have had to overcome penalty heartache in a major tournament game on home soil once before. And Gareth Southgate was central to that one too, of course, 25 years ago.

Back at Euro 96, Southgate – making his ninth appearance in an England shirt – was the unwitting member of the squad whose penalty was saved by Andreas Kopke to send England crashing out. Wind forward a quarter of a century and it was Bukayo Saka – also winning his ninth England cap – who was the fall guy from 12 yards out at Wembley as their Euro 2020 dreams went up in smoke.

This is very much old territory, but what came next for England back in 1996? Well, Terry Venables was replaced by Glenn Hoddle in a pre-planned transition of power and the former Swindon Town and Chelsea manager was tasked with leading the Three Lions into a World Cup qualification campaign which would test out just how much the scars of that summer had healed.

In many ways, Hoddle’s first match in charge began a new era which would become known as the ‘Golden Generation’ when the new boss handed a 21-year-old David Beckham his international debut. While the likes of Gary Neville and Paul Scholes had already featured for England under Venables, Beckham’s arrival as an instant regular under Hoddle paved the way for the new class to really make their mark on the national side.

That trip to Moldova in September 1996 was about evolution rather than revolution though, with thirtysomethings Stuart Pearce, David Seaman and Gary Pallister, plus a 29-year-old Paul Gascoigne, taking their places alongside the fresher-faced Neville, Beckham and Nick Barmby in Hoddle’s first starting XI.

England won 3-0 that day, and would beat Poland and Georgia in their next two qualifying fixtures, but it was in Hoddle’s fourth game in charge that they would suffer a significant setback as a 1-0 home loss to Italy left them playing catch-up in Group Two and brought about the end of Matt Le Tissier’s fleeting international career. 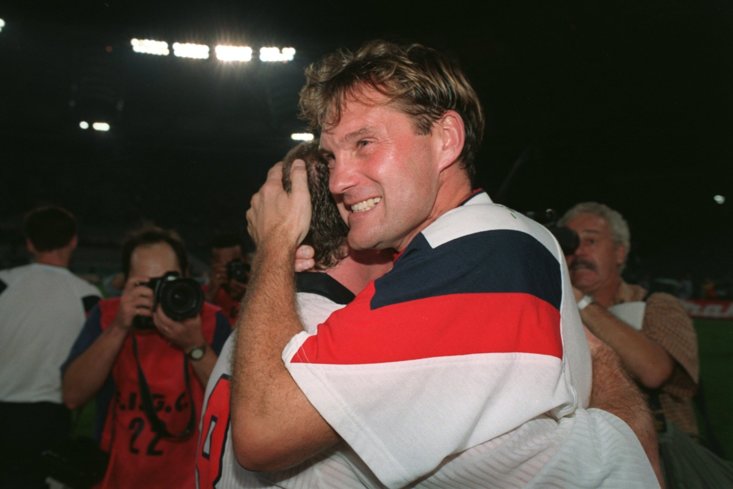 By the following summer there was a new momentum being built up, with four straight victories – two in qualifiers and two in friendlies – giving Hoddle and England a spring in their step heading to France for Le Tournoi, an exhibition event held to help prepare for the hosts for the 1998 World Cup.

Goals from Ian Wright and Paul Scholes gave them a flying start in their opener against Italy, and a late Alan Shearer winner in their meeting with France meant that the Azzurri’s 3-3 draw with Brazil was enough to confirm England as the competition’s champions with a game to spare.

Despite Romario’s sole strike for Brazil in their final game of the round-robin, England and Hoddle had broken new ground, with a first-ever competition triumph on foreign soil, albeit in a friendly tournament.

Four months later, they were celebrating a very real triumph abroad as their 0-0 draw at the Stadio Olimpico in Rome in the return World Cup qualifier against Italy booked them a place at the 1998 finals, marking a huge success for a side which was following the qualification failure under Graham Taylor four years earlier.

In truth, though, that was the pinnacle of Hoddle’s England coaching career. The finals campaign in France the following summer might have offered plenty, with Michael Owen’s ascension to stardom being the highlight, but it was to end with another penalty shootout defeat, this time at the hands of Argentina following the infamous David Beckham sending-off for kicking out at Diego Simeone.

While Southgate isn’t new to the role as was Hoddle, he will want to take something from the experience of having been part of the squad at that time. There were positives in how Hoddle tried to move the country forward after their penalty loss to Germany, but the current man at the helm will also know of the negatives which seeped into the setup over those next two years.

His ability to take something from that experience might just be a deciding factor in how well England perform at Qatar 2022.