1997 was an eventful year in the world of sport. Tiger Woods rocketed into wider consciousness after he won the Masters, his first major, Mike Tyson savagely and inexplicably chomped off a piece of Evander Holyfield’s ear in their WBA Heavyweight title fight, and the 150th Grand National took place on a Monday following a bomb threat.

In tennis, young super-prodigy Martina Hingis enjoyed one of the sport’s most spectacular years ever, after she won three of the four available Grand Slams, at the age of just 16. Famed for her precision, technique, court intelligence, and clinical shot selection, Hingis also reached the final of the French Open but a defeat meant she would ultimately miss out on a stunning calendar-year Grand Slam; a feat that has only been achieved by Margaret Court (1970) and Steffi Graf (1988) in the Open Era.

1997 saw Swiss sensation Hingis set a flurry of records, including becoming the youngest No.1 in tennis history. Between the years 1997 and 2001 Forbes listed Hingis as the highest-paid female athlete in the world.

Given her age at the time, Hingis - who first picked up a racquet aged two - was expected to dominate the women’s game for years to come, but a catalogue of injuries meant she only won two more Slams; retaining the Australian Open in 1998 and 1999. In 2003, with 40 singles titles and 36 doubles titles in the trophy cabinet, she was forced to retire aged 22, only to return and win the 2006 Australian Open mixed doubles.

Hingis retired for a second time the following year due to a combination of injuries and a two-year suspension after she tested positive for a metabolite of cocaine. In 2013 she made her third and final comeback - an impressive one too - as the singles sensation turned doubles destroyer accumulated 10 more doubles Slam events through to 2017.

A junior Grand Slam winner at an almost incomprehensible 12-years-old, Hingis remarkably turned professional two years later, then in 2016, aged just 15 and nine months, she became the youngest Grand Slam winner ever after she teamed up with Helena Suková to win the Wimbledon doubles title. The year also brought her first WTA singles triumph in Filderstadt, and she started 2017 ranked 6th in the world.

The foundations were in place but few could have predicted the utter dominance that followed in just Hingis’ third year as a professional. The youngster exploded out of the blocks, pitting together up a stunning 38 match win-streak in singles matches; from January through to June - disrupted only by a month’s injury lay-off after she fell off a friend’s horse.

During that winning streak, she scooped six successive titles, which included a first singles Slam success at the Australian Open, aged 16 years and 3 months, making her the youngest Australian Open titlist in history. By March, she’d been crowned the youngest ever World No.1 - during her career she would spend 209 weeks at the summit of the rankings - then in June she reached the French Open Final where she surprisingly lost to Iva Majoli. 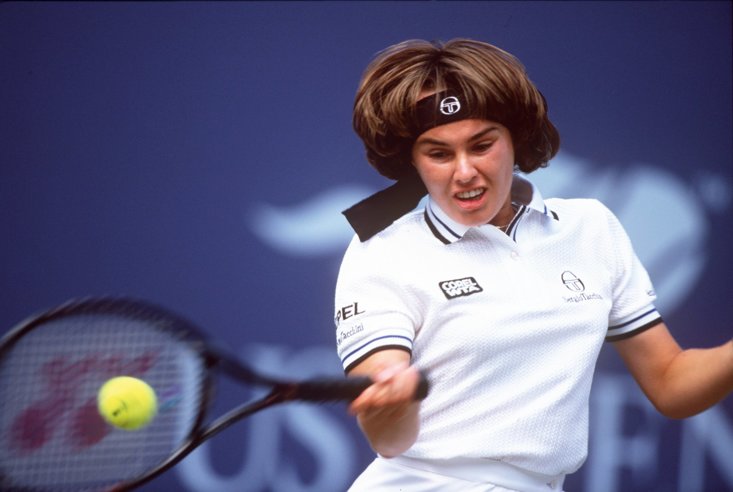 Martina Hingis en route to winning the 1997 US Open

The loss didn’t affect Hingis who swiftly bounced back the following month when she became the youngest singles Wimbledon champion since Lottie Dod in 1887. Hingis recorded another couple of tour wins, then saved her best till last as she roared to success at the US Open, without dropping a single set.

In total she won 12 titles and accumulated 82 wins from 88 matches; that’s a stunning 93.2% win rate. In her three Slam successes, she lost only one set, and beat the likes of Lindsay Davenport, Mary Pearce, and fellow young star Venus Williams.

Hingis would unfortunately never again hit the dazzling heights of 1997 in her singles career - the Williams sisters would dominate from the start of the noughties - but the International Tennis Hall of Fame inductee did excel in both doubles formats and come her final match in 2017 she hang up her racquet with a record of 43 singles titles and 64 doubles titles.