Sung to the tune of DJ Otzi’s post-millennium novelty smash, this was the dominant sound as England fans poured out of Old Trafford in October 2001. A summer banger on an Autumn day, as the Three Lions faithful could afford to look forward to a summer spent watching Sven-Goran Eriksson’s England at the World Cup. Chances are, with this little context, you do not even need reminding which Beckham goal the altered lyrics refer to. You’re already picturing it in your mind as you read this.

For those who remain in the dark, this is the scene. England need a draw against Greece to reach the finals of the 2002 World Cup in Japan and South Korea. They are trailing 2-1 deep into injury time. Teddy Sheringham, formerly of the Old Trafford parish, had come off the bench to equalise in the 68th minute, only to see his efforts cancelled out by Demis Nikolaidis a minute later. David Beckham is shaping up to take a free kick from a central position around 30 yards from goal. A country holds its breath, more in hope than expectation. The midfielder has missed a number of similar attempts throughout the afternoon, and most Three Lions followers felt this one was going the same way.

I was 12 years old when I stood in Old Trafford, watching Beckham stride back from where he had placed the ball. I looked up at my Dad, trying to read any indication on his face that everything would be alright. England would qualify, they always qualified, except in 1994 which I had been too young to remember. But at Euro 96 we had been magic, at France 98 less so, but had still enjoyed a somewhat glorious failure along the way. At Euro 2000 we had been abject, but at least we were there. We would qualify, wouldn’t we?

England’s captain runs up to the ball, almost side-on, like he’s about to drive it towards the corner flag. At the last second, the United star switches direction, using the momentum of the turn to add power to the shot. The ball is whipped at such speed that it hits the top left corner before Greece stopper Antonis Nikopolidis can even react. By the time the goalkeeper has the wherewithal to turn round and look at the ball, it has already nestled in the bottom of his net. Old Trafford stands in unison, cheering with wild, deafening abandon. The Theatre Of Dreams has conjured yet another moment of footballing folklore. I didn’t know it at the time, but I, along with 67,000 other witnesses, had just seen the most famous England goal of the era. 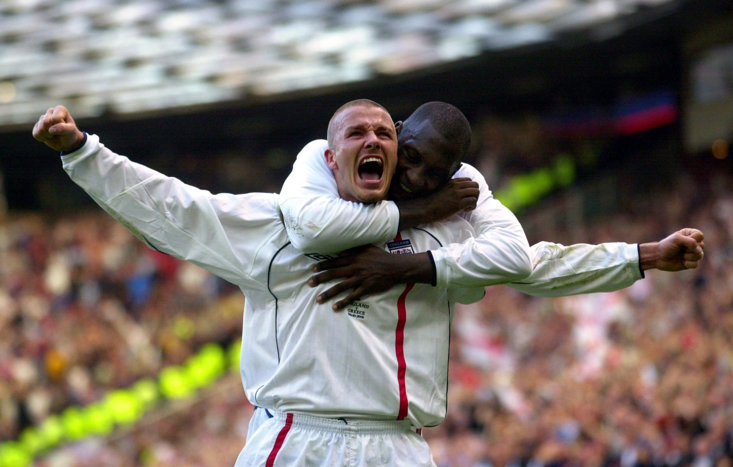 Football can do strange things to people and in the moment nothing feels bigger than seeing your team get a result. People around me were telephoning family members, embracing strangers, dancing in the aisles to the strains of that old England favourite ‘The Great Escape’. Except this time, the song was finally appropriate. England had escaped. Sven’s men had escaped an embarrassing defeat to a Greece side who had lost every away qualifier of the campaign. They had escaped the inquest that would have resulted from elimination at the qualifying stage. Beckham’s wondrous free kick meant England had escaped a lost summer spent on the outside looking in on the 2002 World Cup.

The performance had been below-par, but it is not how you start but how you finish, and England had finished with a flourish. David Beckham, the quintessential free kick specialist, had delivered one of the greatest set-pieces he ever struck. A goal so perfect, it’s relevance outlived the memories of the 2002 World Cup itself in the minds of England fans. Much better to enjoy the euphoria of Beckham’s Old Trafford curler than the ignominy of David Seaman watching Ronaldinho’s own free kick fly hopelessly above his pony-tailed head and into the net in Shizuoka.

For me, the memories are even more primal. When I think of David Beckham and that free kick, I think of the loudest reaction I have ever heard in a football ground. I think of being surrounded by relief, elation and celebration. But most of all, I think of DJ Otzi. “Heyyyyyyy! Hey baby…”.