Darts fans, the wait is nearly over!

Tomorrow evening will see the start of the 2018/19 William Hill World Darts Championship at the Alexandra Palace as 96 of the world's best players battle it out for the coveted Sid Waddell Trophy.  An event like no other, the showpiece tournament of the season has turned into the must-see sporting occasion over the Christmas period and this year's marquee event should provide all the usual thrills and spills over the next three weeks with only one man or woman prevailing.

So, on the eve of the tournament, we pick out three of the standout things that make the William Hill World Darts Championship so special and will capture the imagination of millions of sports fans across the globe.

We've all thrown some arrows down the pub and I am sure most of us have hit a treble 20 or bullseye when stepping up to the oche.  However, darts at the highest level is astonishing with players hitting three-figure scores with ease and often finishing a 501 leg within 15 darts.

The William Hill World Darts Championship will see the best-of-the-best congregate in London and the players that take to the stage will produce some stunning entertainment for the adoring fans and ultimately their brilliance with a piece of tungsten in their hands will provide a magnificent spectacle and provide lots of Christmas cheer.

Michael van Gerwen will head into the event as the favourite and the two-times champion is sure to be bidding for another world title, but behind 'Mighty' Mike there's a whole host of top-class players with former winners Gary Anderson, Rob Cross and Raymond van Barneveld just another star triumvirate bidding for glory.

PDC Darts
@OfficialPDC
🗣”I've been a little bit unlucky lately but I have to finish better and I'm working on that.”
💚@MvG180 knows exactly what is required to lift a third @WilliamHill World Championship title.
▶️ 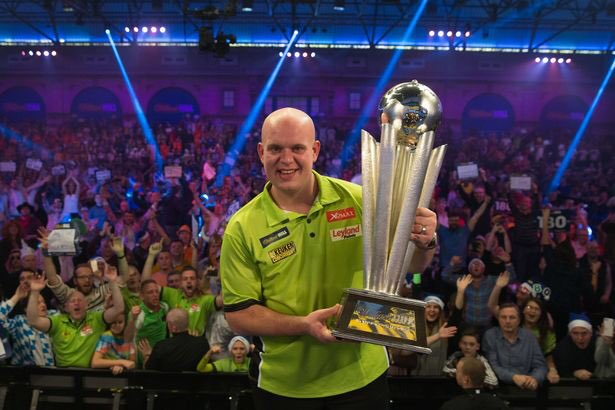 Darts has evolved immeasurably over the last 30 years and the sport is only getting bigger and better by the year.  The purist may yearn for the old days of the World Darts Championship being played at the Circus Tavern in Purfleet in a fairly mundane atmosphere, but now the spectacle is played in front of an army of excitable, exuberant fans that provide some sensational colour to the event.

While the songs and chants may get rather laborious at times, the constant buzz and noise around the Alexandra Palace has helped catapult darts into the mainstream scene once again.  The fans flock to the capital for the World Darts Championship and without them the tournament would lack the razzmatazz it needs to ignite into one of the most must-go-to events on the calendar.

The cacophony of noise produced by the fans adds tremendous excitement, but the colour added by those fans donning a whole array of fancy dress outfits launches darts into the limelight further.

A modern craze that has seen fancy dress become a thing at the cricket has also exploded on to the darting scene and groups of people will take it upon themselves to find a whole host of weird and wonderful fancy dress lines and there have been some corkers down the years.

From superheroes to TV characters, the William Hill World Darts Championship will attract an abundance of sensational fancy dress and it will provide a huge amount of colour to what will be a sensational showpiece event culminating with the final on January 1, 2019