The Race - One of two big trials for the Tour de France, and arguably the more recognised one. The Criterium du Dauphine normally is the premier trial, but This year, the Tour de France has been moved back a week later than usual because of the World Cup in the summer, meaning there's an extra week between the Dauphiné and Tour.

The Route - Is packed with climbing, having more summit finishes than the actual tour, including a carbon copy of stage 11 – raced as the sixth stage in the Dauphine this year.

Prologue, Sunday June 3: Valence, 6.6km (ITT) - There shouldn’t be many gaps over a short prologue in Valence. This is the first time that the race has taken this route to start the Dauphine since 2008

Stage one, Monday, June 4: Valence to Saint-Just-Saint-Rambert, 179km - An undulating route for the sprinters and no guaranteed bunch kick given the terrain that has to be covered before two laps of a finishing circuit that contains the category 4 Côte du Barrage de Grangent, 1.4km at 4.3%. The last ascent comes just 4km from the finish line.

Stage three, Wednesday, June 6: Pont-de-Vaux to Louhans-Châteaurenaud, 30.5km - An extremely important day, as this is the last team time trial before the Tour – which has a team time trial on stage three this year - and some teams, like AG2R, have come with the squad that they intend to use to race the Tour.

The route is pan flat and straight, so this is all about power.

Stage four, Thursday, June 7: Chazey-sur-Ain to Lans-en-Vercors, 181km - Now it gets good. The beginning of four days of climbing and the longest stage of the race. The action really starts later on, with the Hors Categorie climb of Mont Noir lasting 17.8 kilometres at 6.9%. There’s a descent and then rolling terrain before the final climb to Lans-en-Vercors, 4.8km long but at 7.5%. 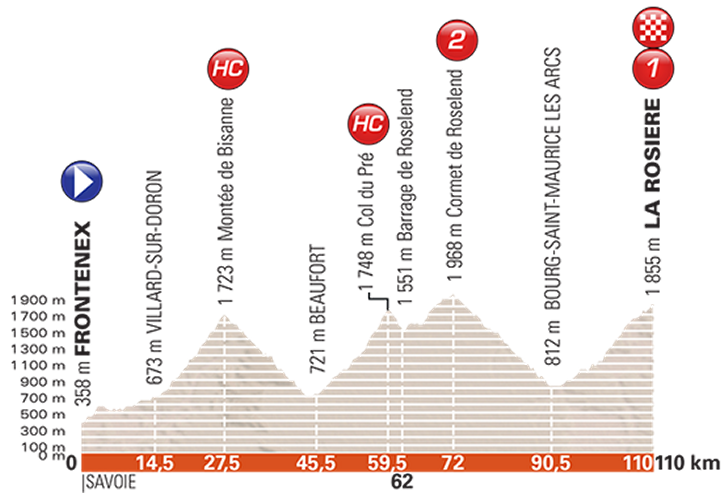 A carbon copy of what promises to be one of the best stages of the Tour. The only different between stage 11 of the Tour and stage 6 here is that the Dauphine starts in Frontenex and the Tour in Albertville.

Montée de Bisanne is 12.4 kilometres at 8.1%, and then after a descent into Beaufort the riders hit the 12.6km Col du Pré, which averages 7.6%. The climbing continues as after a short descent into Barage de Roslend and then a further climb for the Cormoet de Roselend, 5.7 kilometres at 6.4%.

There’s 20 kilometres of descending into Bourg-Saint-Maurice and then the final climb. La Rosière is a test of length, measuring 17.6 kilometres from top to bottom and averaging 5.8%. The toughest section is in the middle, with 6 kilometres at 8% or above before the rest of the climb closes up at 5%.

Stage seven, Sunday, June 10: Moûtiers to Saint-Gervais Mont-Blanc, 129km - The same formula is repeated once again for the last stage, a dash through the Alps to Mont-Blanc, the finishing venue for Stage 19 of the 2016 Tour when Romain Bardet attacked that day on the descent to Domancy and the base of the climb to win the stage and go a long way to sealing second place that year with the yellow jersey group 23 to 36 seconds behind.

The Contenders - The dilemmas are building up around Team Sky, although they are all happy ones. The will he/won’t he (or should it be ‘can he?) regarding Chris Froome following his Giro win must be added to the question of whether he can recover in time as he goes for the double.

Geraint Thomas started the season well with a second at the Volta Algarve and then a third at Tirreno-Adriatico, but a disappointing classics season was followed by a complete blowout at the Tour de Romandie and he needs to bounce back in no uncertain terms here. At this best, the route suits him right down to the ground with Team Sky bringing a powerful engine for stage two as well as his obvious climbing talent.

Vincenzo Nibali is heading to the tour for Bahrain-Merida and he served a serious notice to all rivals when breaking away on the Poggio and taking Milano San-Remo with a solo attack. The rest of his spring classics campaign was a number of good showings in the cobbled classics – which will be vital during the Tour. It will be useful to see how fit he is here, but he often improves a great deal for his outing here; when he won the Tour in 2014, Nibali was seventh at the Dauphiné, while he was 12th the following year and then took fourth place at the Tour.

Home hopes will rest with Romain Bardet of AG2R, who took yet another podium at the Tour last year after finishing sixth in last year’s Dauphine. He returns from a block of altitude training at Sierra Nevada and excellent results at Fleche Wallone (ninth) and Liege-Bastogne-Liege (third), and the strength of his team bodes well for a decent result against the clock in the team time trial. He should be looking to better his sixth. 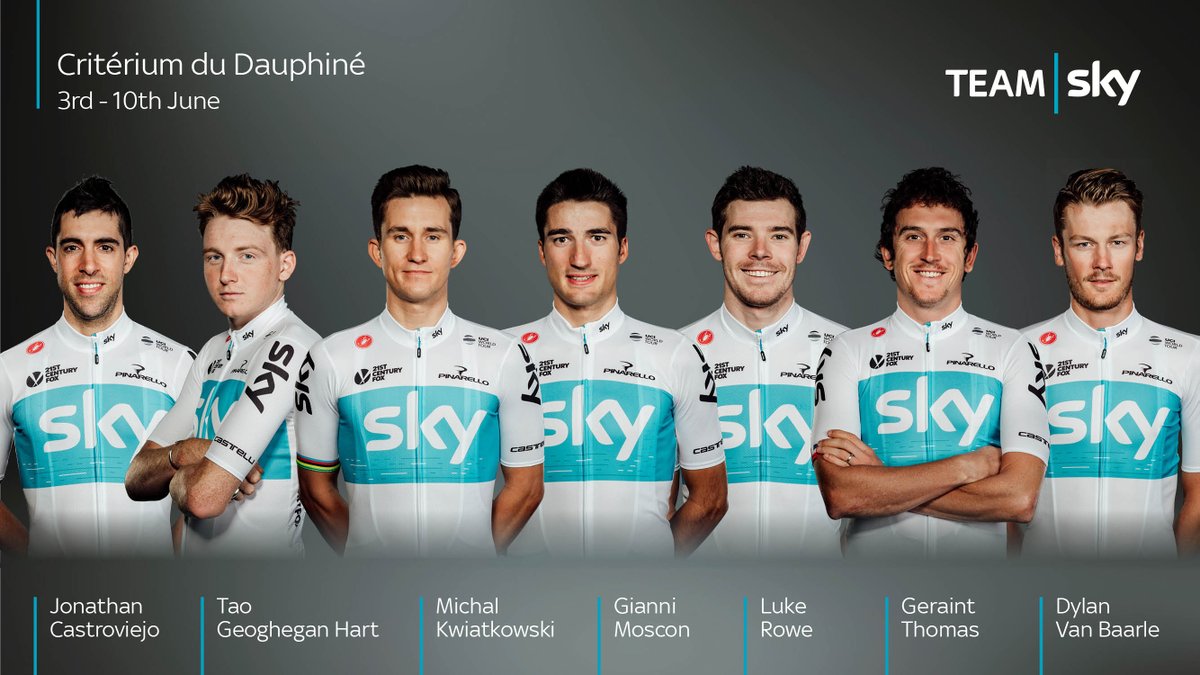 Marc Soler (Movistar) isn’t expected to take a lead role at the Tour but the 24-year-old has already shown that he will contend for that honour in the future with a sensational season so far including a win in Paris-Nice when he held off none other than Simon Yates. He was then fifth at the Volta Catalunya, when Alejandro Valverde and Nairo Quintana (along with Yates) were ahead of him, some of the strongest form in this field.

Whilst brother Simon has been getting all the attention in Italy, Adam Yates has been quietly going about his business, with a fourth in Valencia and fifth at Tirreno to start the season before he broke his pelvis at the Volta Catalunya., Considering that, he rode very well when fourth at the Tour of California and the thought of him improving for that first outing back is quite exciting. Ninth at the Giro last year, he didn’t cope with the Vuelta at the end of the year and the Tour might well suit him a lot more too. He could take high rank with the end climbs sure to suit.

Ilnur Zakarin (Katusha-Alpecin) delivered on his promise and finished fifth at the Giro and third at the Vuelta last year, and whilst the Russian has had a low-key start to the season he might be holding back a late peak for the Tour, having shown his hand early before the Giro last year.

Warren Barguil dominated the mountains at the Tour last summer and then moved from Sunweb to Fortuneo-Oscar. He’s said he’s aiming for mountain stages once again this season, but he’s shown nothing since moving to his new outfit and another no show would be a worrying leadup to the tour.

Quick-Step have two options here, although Bob Jungels, the winner of the white jersey at the Giro last year, ought to be their main contender. The Liege Bastogne Liege winner arguably produced a career best to take the closing spring classic and he promises to be suited by the Tour’s route. Julian Alaphlippe is likely to be amongst the best sprinters here but he can climb well too and gives Quick-Step two shots at the overall.