Yesterday’s Stage - A Tour de Force from Julian Alaphilippe to take the stage and the polka dots from the breakaway. The Quick-Step man was one of the first riders on the attack before biding his time in the break and then making his big move on the Col de Romme and taking apart what was a fractured and tiring break. Courtesy of coming over the summit first and having taken the Col de Bluffy and Montée du plateau des Glières, he also leads the polka dot jersey in addition to having dominated the stage, coming home 1:34 clear of Ion Izagirre (Bahrain-Merida) who just got the better of the extremely active Rein Taaramae (Direct Energie), one of the day’s most aggressive attackers, over the rise that preceded the line.

The ride of the day goes to yellow jersey Greg Van Avermaet (BMC), who decided to go into the breakaway to defend his advantage and ended up extending it over the main overall favourites. He finished fourth on the stage, 1:44 behind Alaphilippe - but more importantly,1:39 ahead of the peloton, ensuring a longer spell in the maillot jaune.

Behind, much of the overall contenders came in as one, led by Dan Martin, but there were some big losers after the ascent of the Colombiere. Bob Jungels (Quick-Step Floors), Bauke Mollema (Trek-Segafredo), Ilnur Zakarin (Katusha-Alpecin) and Rafal Majka (Bora-Hansgrohe) were distanced and ended up losing 51 seconds. They did not suffer nearly as much as Rigoberto Uran (EF-Drapac), came in 2:36 down after being distanced on the Colombiere. 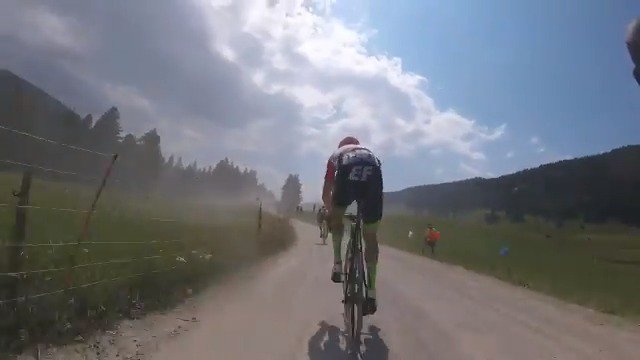 A corker of a stage – just 108 kilometres – and all about three big climbs. There’s over 4,000 metres of climbing to boot.

There’s 20 kilometres of descending into Bourg-Saint-Maurice and then the final climb. The closing Category 1 climb of La Rosière is a test of length, measuring 17.6 kilometres from top to bottom and averaging 5.8%. The toughest section is in the middle, with 6 kilometres at 8% or above before the rest of the climb closes up at 5%.

Bar a different start town, this is almost exactly the same stage that was used for the sixth stage of the Criterium du Dauphine. It was raced flat out from start to finish and there was a huge early escape that produced the winner. The results are below.

We saw the first cracks from some of the riders going for the overall yesterday, but many of the main contenders were able to cope with Sky’s pacesetting through the day, although things only got serious in the last 30 kilometres and there will be a lot more pressure on tomorrow.

Greg Van Avermaet kept the jersey with a brilliant ride and will try his best, but a higher pace over the shorter stage and a summit finish makes doing so again hard and it’s likely Thomas will be the yellow jersey if he gets dropped.

Movistar are well placed although little questions preside over their yellow jersey challenge; Nairo Quintana is healthy but furthest behind, Mikel Landa crashed again yesterday (albeit in the neutral zone) and Alejandro Valverde looked vulnerable for a second over the Colombiere. Romain Bardet’s short of key lieutenants but this is his terrain; Dan Martin led the peloton home and appears to be strong whilst we’ve not seen much of Tom Dumoulin or Adam Yates – we’ll know a lot more today.

Yesterday’s stage was made for a breakaway, perhaps more than today’s given the summit finish, but there will still be a big battle to get into the escape. Julian Alaphilippe will be looking for more mountains points and so will Rein Taaramae, Serge Pauwels, Rudy Molard and now white jersey David Gaudu.

BMC have yellow but also break options in Tejay Van Garderen and Damiano Caruso whilst Cofidis didn’t make the escape but have Dani Navarro and Nicolas Edet amongst others. Don’t count out either of the Izaguirre brothers – Ion went well yesterday but Gorka is the Spanish champion and Nibali might use them tactically.