Yesterday’s Stage - The race finally came into life, and when it did it really exploded on the final slopes to La Rosière. Sky were challenged by Movistar, who had sent Alejandro Valverde off the front at the Col du Pre where Marc Soler was waiting, and they managed to build an advantage of 2:15 over the peloton before the finish. It was clear that Sky had enough in reserve however, and a sensationally long turn from Michal Kwiatkowski hoovered up the remains of what had been a huge break. In between Tom Dumoulin attacked from the peloton and was quickly in front of Valverde, who sat on the wheels but was clearly tiring.

When Egan Bernal, surprisingly blew up thanks to the sheer force of Michal Kwiatkowski’s turn, the race was finally open – but Sky came to the fore and with 6 kilometres to go, out of nowhere, Thomas made his move. He quickly skipped clear and left to join Dumoulin, who was with Damiano Caruso at the time.

Bardet cracked first, dragging Froome with him and establishing a selection with Quintana, Nibali, Roglic, and Martin. They all took turns to look at each other, allowing Martin to come back and thus launch a counter attack that was a golden chance for Froome to start putting time into his rivals with nobody else able to follow, and they quickly began to establish their own gaps on the others.

Behind Mikel Landa was feeling the effects of his crash a couple of days ago and struggling along with many others whose yellow jersey hopes took a major blow today. Before he was jettisoned many other significant names had been dropped including Ilnur Zakarin, Jakob Fuglsang, and white jersey Pierre Latour, along with British hope Adam Yates who was struggling from early on – at the same time that his teammate Mikel Nieve went for the stage win from the break.

Nieve looked set to take the stage and give Mitchelton some considerable compensation, but like Annemiek van Vleuten swooping on Anna Van Der Breggen just over 24 hours before, Geraint Thomas swooped late to take the win and the yellow jersey. He put in 20 seconds on Tom Dumoulin, who pipped Chris Froome for the second set of bonus seconds, whilst Damiano Caruso was fourth and Mikel Nieve ended up in fifth, an undeserved disappointment given his fine effort.

The Yellow Jersey Standings are below, with Sky in the perfect position as Thomas is 1:25 ahead of Froome, with a handy 24 second gap to Dumoulin and then a bigger gap to Vincenzo Nibali. Behind him, but not by far, are Primoz Roglic and Steven Kruijswijk, who rode brilliantly for Lotto-Jumbo, giving them two riders in the top six. 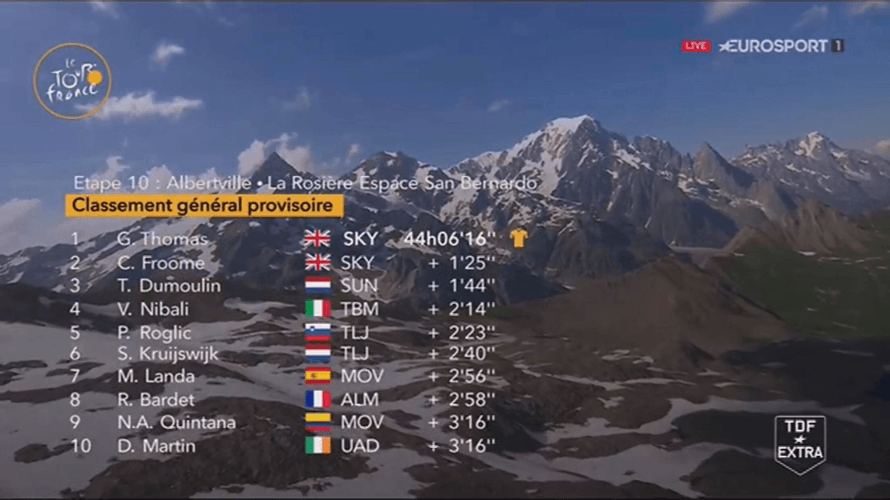 The last of three days in the Alps but never the least and once again relentless from start to finish. There’s a downhill run of 26 kilometres from the start before the first big climb, the Col de la Madeleine. Another hors categorie ascent, it’s 25.3 kilometres at 6.3% and can be split into three sections, with the middle and last sections – those coming after 10 kilometres of climbing – being the hardest.

After a descent the riders hit the base of the Lacets de Montvernier, a beautiful spectacle to watch on television but an utter beast of a climb with 18 hairpins and an average of 8% over just 3 kilometres.

A descent of the Maurienne valley takes the field into the base of the Col de la Croix de Fer, a near 30-kilometre effort which is essentially four climbs in one. The total average is 5.2% but a large part of that average is thanks to the descent and false flat from the Tunnel des Quatre Jarriers which lasts around 6 kilometres and from Saint-Sorlin-d'Arves the road doesn’t go below 6%.

The descent from the top heads down to a reservoir at Allemont, via the Lac du Verney. Then we take the D526/D1091) to Bourg-d'Oisans, and the finale.

The Alpe D’Huez doesn’t take much explaining. Famous even to those who aren’t followers of the sport, it’s 13.8km at 8.1% with 21 hairpins and thousands of fans. See below for a reminder of what it can do.

The Contenders - Do Team Sky want another stage? It’s up to them as they can grind into the gap of any break and 40 riders went and they were all pulled back in the finale. Chris Froome is a short favourite already and with Thomas already having one in the bag, putting him clear of Tom Dumoulin just cements their position. Dumoulin got an early jump but was motoring up the climb today, evidently avoiding (for now) the exertions of Italy. He has to be a major contender although Alpe D’Huez perhaps suits him less than La Rosière, a constantly higher gradient to deal with rather than a straight and gradual climb.

Romain Bardet said he had the legs to go with the best today, but messed up tactically; “I’m disappointed because I made a big mistake in not being more attentive when Martin attacked,” he told VeloNews and AFP; Tomorrow is a chance for redemption whilst Dan Martin is also making moves – if only he hadn’t crashed in the first week. Movistar’s main man is surely Nairo Quintana as Mikel Landa is feeling the effects of his crash still and perhaps the Alpe will suit the Colombian more than yesterday.

Lots of names will attempt to get in the break again. EF’s Rigoberto Uran is out of the yellow jersey fight so stage wins are now the aim and it’s attack time for Dani Martinez and Pierre Rolland. Cofidis went hard today with Dani Navarro and Jesus Herrada and both made bold bids, they could try again but Nicolas Edet is another contender too. Bahrain-Merida are closing in on the team classification – Franco Pelzotti is tied to Nibali but the Izaguirre brothers have made breaks and what about Domeinco Pozzovio, the pint sized climber?

BMC had Damiano Caruso produce a fine ride yesterday and will be looking to take a stage win, Wanty had Warren Barguil helped a lot but he cracked at the end, and Direct Energie have anyone of three climbers to send up the road.

Froomewatch - Action! A big attack after Geraint Thomas had gone and a strong one with all but Dan Martin jettisoned. He’s now 1:25 behind Thomas and the team dynamic will be intense now, although Alpe D’Huez offers him a chance to put time into Dumoulin and the rest. Will Thomas last three weeks? When will the Giro legs kick in for him?