Say It, Don’t Spray It - Whilst all of the chaos of establishing the break was taking place, France clashed with France and sport with politics as a farmer’s protest saw bales of hay put into the road that much of the peloton had to swerve. The Gendarmerie intervened with a robust response, pepper saying the roadside protesters as they removed them from the road, but there was blowback – literally – as the pepper spray came into the eyes and faces of the oncoming peloton.

At first Henrich Haussler was shown to be suffering but it became clear multiple members of the peloton had been affected, including Geraint Thomas, Chris Froome and Peter Sagan. The race was neutralised whilst riders tried to remove irritants from their eyes at the medical car, and icture desks across the world had incredible shots of protests being arrested and riders eye washing.

If that’s not enough, it could have been worse – there was an attempt to try and put sheep into the road which would have wiped out the peloton entirely.

Are You Not Entertained? There were no GC attacks yesterday and many have moaned about Sky grinding the race into but the joy of the Tour is that every stage is live from start to finish and the fight to get into the breakaway is fascinating and exciting in itself and often lasts upto an hour in some cases too.

The racing from the break this year has also been incredibly aggressive at the finishes, lit up by Gesink, Calmejane, the Izaguirre brothers, Mollema, all of Cofidis, Alaphilippe and Barguil too all of whom deserve a great deal of credit for their exploits too.

It’s also fascinating to watch tactically, with the phenomenon of huge breakaways meaning we have a second peloton with roleurs and workhorses setting things up for climbers in the valley roads for the team classification or to have a fast lead-out into the climb.

Stage 16 Recap - Another calm beginning to the stage with the break once again fancied to make it, but the early roads were rolling at best and this meant limitless fights to get into the escape. It took over 100 kilometres for the break to go – not to mention the interruption of a protest less than 30 kilometres into the race – and when it did it was 46 strong, consisting of:

Gilbert (Quick-Step) went for a long ranger across the Col de Portet-d'Aspet and did brilliantly to put a minute between himself and the break but then took an awful crash, trying to correct his line but instead going over the side where others have before. It looked scary and hearts were in mouths but he eventually remounted, a win for all and a reminder that it is just a bike race.

They hit the Portillion as one and then the attacks came, a flurry of attacks early that eventually saw Adam Yates go over the top with his best legs followed by Julian Alaphilippe who sealed the mountains jersey with his second place. Yates had a gap of 15 seconds and looked good, but he hit a damp patch whilst Alaphilippe was flying down the descent. 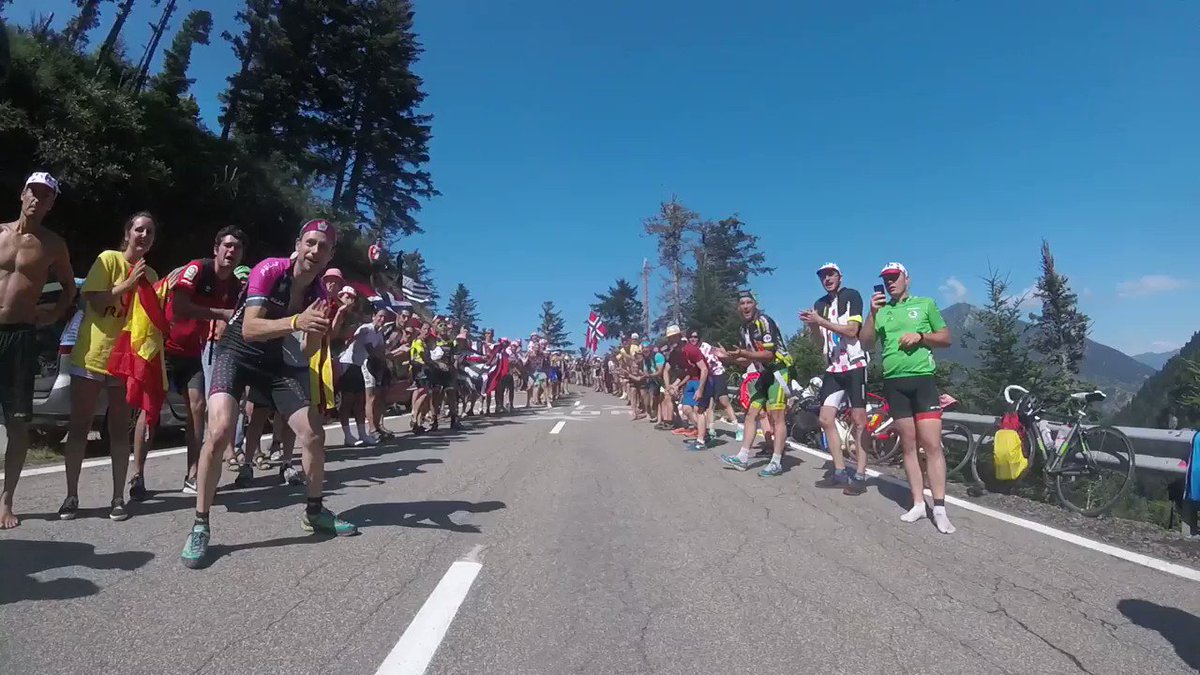 The one everybody has been talking about, given the length of the stage – it’s the shortest tour road stage since split days – and the unique start too (see below).

This is about three climbs, packed into just 65 kilometres, and all over the road.

38 kilometres are uphill and nearly all the rest are downhill with descending like to be as crucial as climbing and it’s also the best chance for pure climbers to make any gains given it’s the last summit finish of the Tour – and just the third!

Start Your…. Bikes? We start on the first of three massive climbs, and as such we have a ‘grid start’ Riders will be put into different groups along a 70 metre-wide stretch of road – and then set off in batches of 20 according to their place on the general classification.

The Contenders - The start and distance don’t lend themselves to a break like yesterday or Friday did, so let’s focus on the GC contenders.

Today is the day for the Sky battle. If Chris Froome is to win this Tour and make history on several fronts he must start taking time here with just two other chances left and no other summit finishes. However, when the two have raced against each other Thomas has looked the strongest and if he can stay upright and avoid cracking then this is another chance for a hat-trick.

Everyone expected Movistar to be the one taking the fight to Sky but Lotto-Jumbo have ridden brilliantly with Primoz Roglic (an excellent time-trialist let’s not forget) fourth and Steven Kruijswijk in seventh. Kruijswijk was a brilliant breakaway rider on Alpe D’Huez, setting the race alight with 75 kilometres to go and in the end only losing 53 seconds to Thomas. Today is a platform for him to do the same and if he restrains his effort then he could be a danger to all. Roglic showed what he could do at the Croix Neuve on Saturday with a sustained effort and will be a late charger here. Antwan Tolhoek has also performed brilliantly along with Robert Gesink – how will they be used?

Tom Dumoulin is probably best suited to the time trial coming up if on peak form but Sunweb have been active through the race. He was second on Alpe D’Huez in what turned out to be a sprint at the top of the line and will use his diesel engine all the way up the climb.

Movistar’s trident hasn’t worked out but don’t count any of them out just yet. Mikel Landa is getting over his back injury, this stage and the Pyrenees should suit Nairo Quintana lots more than the Alps, and Alejandro Valverde and Marc Soler will be useful over a stage of this length. All that said, they do have to improve.

Dan Martin has been the most attacking of the Top 10 riders and thrived on the short stage of it’s type in the Dauphine. He didn’t attack yesterday but this is perfect for him and he’s not an immediate threat to Sky which is a great help for his chances.

A break? Plenty of riders will try and we know the suspects now but it’ll be very hard to stay away.

Froomewatch - The most eventual part of his day was the worst – but plenty of eye drops on hand and Sky didn’t miss Moscon too much today. Tomorrow will be big….