The stage was everything we’d hoped for, and at the end, Nairo Quintana had won Movistar’s first stage of the Tour and Geraint Thomas looked like a virtual tour winner in waiting. There was action right from the green light – did I tell you about the Tour Grid Start? – with a break going away surprisingly early and easily. It consisted of the first attacker of the day proper in Astana’s Tanel Kangert, who was quickly joined by Julian Alaphilipe (Quick-Step), Nicolas Edet (Cofidis), Kristijan Durasek (UAD) and Jesus Herrada Lopez (Cofidis). They had a 16-second lead over another group of 16 riders including Bauke Mollema, Alejandro Valverde and Adam Yates, and the two group quickly built an advantage over for the peloton.

Kangert went over the top of the Montee de Peyragudes with the trio of Alaphilippe, Herrada, and Durasek followed by a group that consisted of Alejandro Valverde, Marc Soler (Movistar), Adam Yates (Mitchelton-Scott), Rafal Majka (Bora-Hansgrohe) Dani Navarro, Jesus Herrada (Cofidis), Dani Martinez (EF-Drapac), and Omar Fraile (Astana), with the peloton behind as Nairo Quintana, who suffered two punctures on the first climb but was back on with ease.

As the break hit the Col de Val Louron-Azet Herrada was dropped and in behind AG2R moved up for Romain Bardet, with Mathias Frank, Silvain Dillier and then Pierre Latour putting everything on the line whilst Primoz Roglic tracked quickly. Marc Soler joined, on a retreat from the break, and the yellow jersey group was quickly down to no more than 20 riders strong.

Latour burnt himself out before the top, and the yellow jersey group went down after the breakers, who were still flying down the mountain on the toughest descent of the tour. Falls were always a danger, and unfortunately Peter Sagan took a hard one on the descent – he could remount and finish but battered and bruised.

Kangert hit the final climb with just under three minutes on the chasing yellow jersey and quickly dropped Alaphilippe, his polka dot jersey happily safe, setting on his way for an attempt at taking Astana’s third stage.

There was one snag, however – and that was the battle between the leaders of the race. Dan Martin made another move, which was enough of an invitation for Nairo Quintana to light up the blue touch paper and the sprightly Colombian clearly had his best legs on, taking 30 seconds out of the yellow jersey group in what had seemed like no time at all. Martin was hot on his heels and suddenly with nearly an hour’s climbing left we were mano-a-mano, with Primoz Roglic attacking off the front of the yellow jersey group and Chris Froome then following. The two distanced the rest of the group but were brought back not by Sky, but Tom Dumoulin and his big engine. 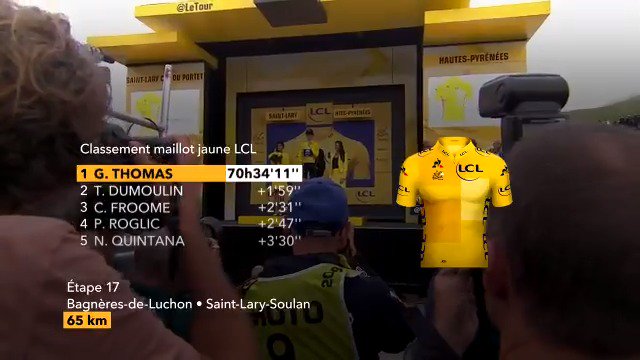 Quintana found and passed Valverde whilst the yellow jersey group quietened down, allowing Poels to come back and Pelizotti to drag on. Quintana was passing Kangert up the road and riding with Rafal Majka, with Martin chasing hard behind, and their advantage was growing as the favourites were looking at eachother.

With 6.5 kilometres to go Nairo Quintana went solo and dropped Majka, flying towards a stage victory, and just a kilometre later Romain Bardet went backwards and quickly too, a letdown for AGSR who had called all in on their leader and were seeing the mountain take the chips.

The question of who was Sky’s number 1 was answered in those short metres as Thomas could follow the accelerations whilst Chris Froome didn’t have the legs to go with the trio, with Egan Bernal dropping back to help him.

Quintana was home and hosed barring an accident and took victory 27 seconds over Dan Martin, perhaps a sign of what could have been if he’d found that form earlier, ahead of Dan Martin in second. Geraint Thomas sprinted to take home third and lock down the yellow jersey, with Primoz Roglic taking a fine fourth although he could not drop Doumlin. Steven Kruijswijk was just off them and only lost a few seconds late on, whilst also taking a place from Bardet. Further behind Froome lost time (see Froomewatch)

Egan Bernal rode brilliantly and it can’t be long before he gets his chance – he’s only 21 but Froome is 33 and Thomas 32, meaning there’s a change in the hierarchy coming. Mikel Landa rode well to limit his losses whilst Bardet dropped many places and the focus for AG2R will be to have Pierre Latour take the white jersey home.

A respite for all and a reward for the few spinners that are left at this point. Only the category 4 Côte de Madiran and Côte d'Anos are any lumps of note across the route and the finish in Pau, a popular tour destination, is flat although the last two kilometres are tricky with a roundabout onto boulevard Recteur Jean Sarrailh, and a sharp left onto avenue Jean Mermoz; before a second roundabout onto the boulevard Champetier de Ribes and a sharp left onto rue Michelet/rue du Maquis de Béarn, and the finish line by place de Verdun.

Which sprinters are left? Peter Sagan has three wins and the points jersey – it’s mathematically impossible for him not to – and also bad road rash after a serious crash. He’ll continue and hasn’t broken anything but will he be at top form? Bora have lasted well through the race but perhaps it might be best for them to try and ger a roleur in the break. UAE-Emirates have a stage win but not for Alexander Kristoff so it’s probably all in for him unless they put a man in the escape.

Quick-Step have had their fun, Philippe Gilbert and Tim De Clercq now being out means it’s all about another stage with for Julian Alaphilippe tomorrow as he has the polka dots so no pulling from them but Yves Lampert and Niki Terpstra could both try something either long range or late from the front.

Arnaud Demare hasn’t had his win but he keeps surviving and the field is thinned down so this has to count as a chance for FDJ along with Sunday whilst John Degenkolb is an option for Trek too, he’s been amongst the strongest sprinters in terms of endurance.

BMC have plenty of Rouleurs including Michael Schar and Stefan Küng to try for a long range attack and Dimension Data have options too – Edvald Boasson Hagen is an all rounder who can sprint and Julian Vermote can try late. 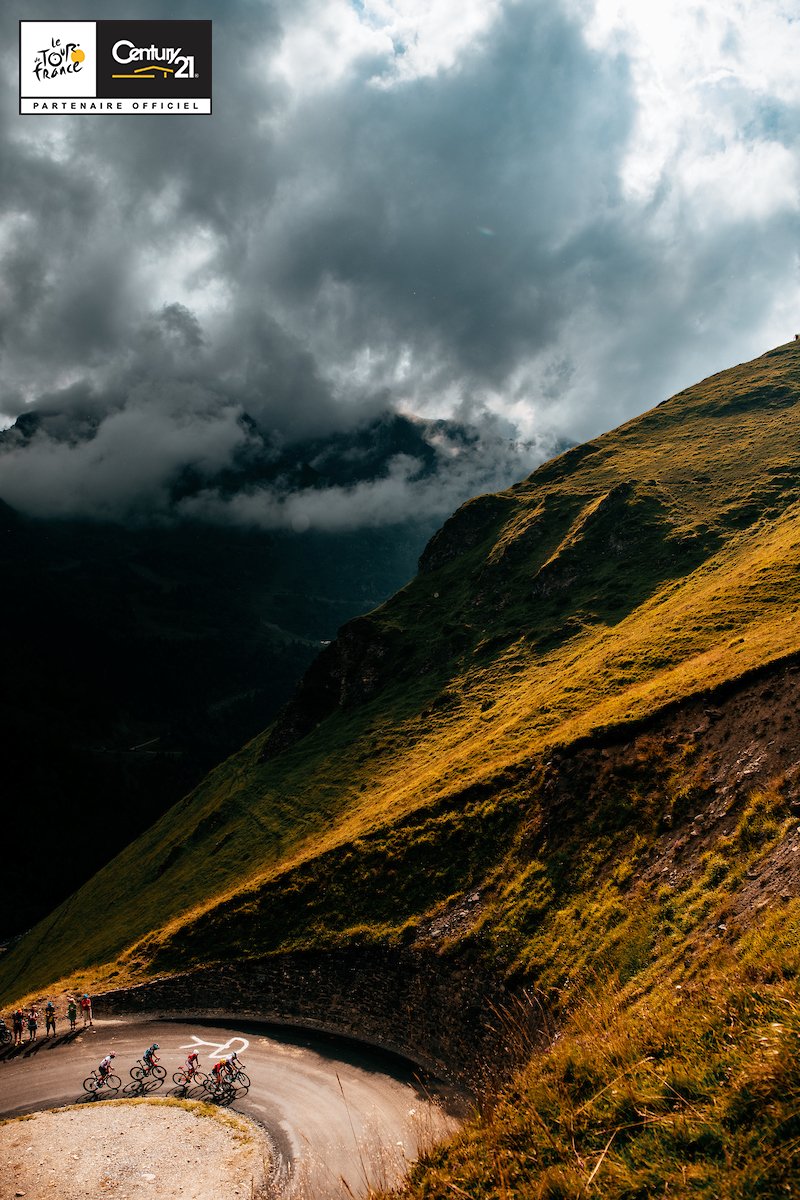 The fifth tour must wait. Froome went on the wheels early and at one point maintained a gap on the wheel of Roglic but when Doumlin attacked late, he blew up. Rallying as hard as he could was not enough to prevent the concession of 48 seconds and he conceded that Thomas is now confirmed as the man to take the jersey to Paris, with Froome telling Velonews: “It was a very intense day but I’ve got no regrets,” Froome said after finishing nearly a minute down on his team-mate. “G has ridden such an amazing race and he deserves to be in yellow – and, fingers crossed, he holds it now until Paris.

“That’s professional cycling. That’s what a team is all about. I’m happy just to be in this position. I’ve won the last three Grand Tours I’ve done now, so it’s certainly been tough build-up for me but I’m still going to try and fight for the podium and try to keep G up there in yellow.”