The Last Mountain: Yesterday’s Report  - An epic day that ended with Primoz Roglic taking his second – and unlikely to be his last – Tour stage whilst Geraint Thomas took another giant step towards bringing the yellow jersey home as he sprinted and took bonus seconds on a day that was dominated by the yellow jersey contenders despite the best efforts of an early break. The race exploded well before the Col d’Aubisque, but we had mano-mano racing before Roglic went off the front over the top, catching and passing Rafal Majka and then proceeding to fly down the fast, technical descent. That and his pure power saw him put 19 seconds into the favourites, most importantly including Chris Froome, who slipped off the podium by 13 seconds and who now looks destined for fourth with Roglic sure to go well in tomorrow’s time trial.

It was a group with all the right ingredients to stay away but one crucial flaw – the presence of Bob Jungels, who was threatening Ilnur Zakarin’s 11th place on the maillot jaune standings. Katusha have been deiminated through this tour, but they had a couple of resources left and Nils Politt was quickly on the front to keep the break at arm’s length. It worked, bringing a gap that was nearly five minutes down to 3:30.

It meant that the pace was high in both the break and the peloton, and the break shed its non-climbers on the opening slopes of the d'Aspin. The gap was 4:06 at the top, where Julian Alaphilippe sealed the polka dots by beating Warren Barguil to the summit with Bauke Mollema in third. In the peloton, Peter Sagan – really feeling the effects of his crash 48 hours ago – began his ‘hardest day on the bike’, being dropped early and starting a battle to make it to the line.

Then the race really exploded. Ian Boswell went as hard as possible and then launched Zarakin, who was followed quickly and he was followed by Mikel Landa of Movistar, and Romain Bardet of AG2R. They were well placed to try and break the Sky train, with Diller dropping back for Bardet and Bennati and then Amador for Movistar to give the group the power it needed.

Fuglsang and Majka began to go and join them whilst Adam Yates also joined them to boot, and by now they had a serious gap. Who else but Alaphilippe took the points over the top.

The yellow jersey group was just 30 riders strong as they few down the descent, with Yates dropped on the long descent, and they headed into the valley roads.

On the Col des Borderes Gesink started to eject riders from the shrinking main jersey group whilst Landa was threatening their two positions and Bardet too, and now we were into the hardest part of the day – the Col du Soulor, uncategorised and put into the Aubisque although in reality it was incredibly hard in itself.

Two groups were at their limit, with plenty cracking from the yellow jersey group including Castroveijo to leave Sky with just Kwiatkowski and Bernal to help them through the last 45 whilst the break was now just down to eight - Bardet, Landa, Jungels, Tangert, Zakarin, Majka, Nieve, Gorka Izaguirre and Barguil.

Their advantage was decreasing, however, and when Steven Kruijswijk attacked that spelt the end of their chances in terms of taking large amounts of time. Knowing that, Landa and Bardet attacked on the lead group to try and take a stage win and Rafal Majka joined them. Behind, Tom Dumoulin attacked, but was brought back by Geraint Thomas, who was still looking reassured even if his team was finally being shredded from him. This ejected Nairo Quintana, suffering from his crashes and what would turn out to be an infection. He lost over four minutes and dropped down to 10th overall, in danger of losing his place in the Top 10 to Zakarin tomorrow.

Dumoulin attacked again when Bernal brought him back to leave just Thomas, Dumoulin, Roglic, Bernal, and Froome over the top of the Solour. The descent allowed for some regroupings with Dan Martin and Domenico Pozzovivo coming back to the yellow jersey group whilst Ilnur Zakarin came back to the leaders on the false flat.

The two groups were essentially together and Roglic made the first of several attacks, forcing Dumoulin to chase – presumably as he was scared of losing any time in a battle for second, although he inadvertently helped Thomas by pulling one of the last key threats back.

Roglic went three or four times, with Dumoulin always closing, whilst Majka pushed on for stage glory. Majka finished the climbing at the tour – at least on road bikes ahead but Roglic went once again and took the lead on the descent. Pushing hard and flying down the mountains like he used to on Skis, he managed to draw out a gap of 19 seconds to take his second stage win, a third for Lotto, and also third place on the podium.

Thomas sprinted in for second place on the stage ahead of Romain Bardet, with Dan Martin in fourth, thus nearly cementing the Welshman’s first tour.

EF Pro Cycling
@EFprocycling
Following his #TDF2018 stage 19 crash, @taylorphinney went to the local hospital with #PinkArgyle doc @RickMorgan9 for evaluation. Diagnosis: small fracture on the bridge the nose, small fracture on the orbital floor of his right eye. No concussion. Thanks for the well wishes. 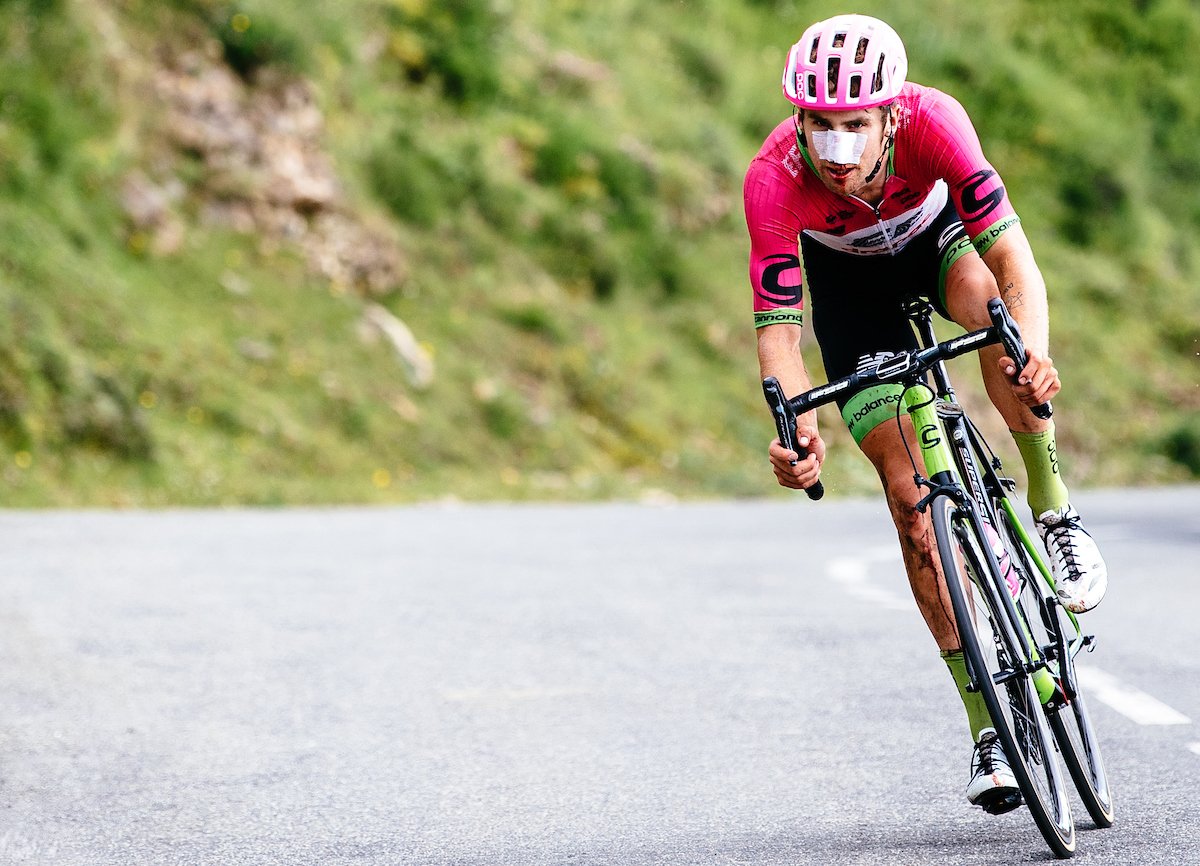 One last twist in the tale. 31 kilometres of time trialling but barrel a single one is flat and this is the Basque Country, meaning unkind percentages from the gun and because these are Basque roads the descents are just as twisty as the climbs as well, a challenge for an effort against the clock and even more so because a road bike is the call here.

The Col de Pinodiéta is 900 metres long at 10.2% and a brutal way to end the stage but there are several drags of 6% through the stage and what rises must fall too.

With 610 metres of elevation and 19 days racing in the legs, this is one for the overall contenders. In any case, three of the best time trialists in the field are in the first three places.

Geraint Thomas is a fantastic time trialist and barring accidents, he should seal his first tour today. The route suits him perfectly and he’s been the strongest rider through the race to boot.

Tom Dumoulin is too far back to entertain taking yellow (or at least seriously) but the stage win is a realistic option although if it is for the World Champion then Primoz Roglic has to be another major contender and a second place is a realistic option for the Slovenian who has spent much of the race setting things alight.

Chris Froome once upon a time would have been favourite for the stage win here and should go well, but taking back his podium place is a tall task and he looks tired now, perhaps feeing his Giro effort. Bob Jungels, in the end, didn’t take back the time he needed on Zakarin but he time trials well and a stage win is an outside option for him too.

What about the specialists? BMC have Michael Schar and Stefan Küng but it has been a long and hard tour which will have blunted their power and this route doesn’t suit them. Taylor Phinney had been going well but broke his nose yesterday and even then the profile does not suit him.

Sky have lots of firepower – will Michal Kwiatkowski or Johnathan Castroviejo be allowed to ride for themselves?

Maciej Bodnar could find this too lumpy but can go very well and is the current Polish Champion.

In the top 10, watch out for Ilnur Zakarin trying to leapfrog a vulnerable Nairo Quintana whilst Mikel Landa and Stephen Kruijswijk will have an intense battle for fifth.

Our plucky hero/villain/pariah rode manfully to try and help Geraint Thomas and made it in with the lead group but we saw the future today as Egan Bernal paced him through much of the climb. Tomorrow sees him battle for the podium, although he is likely to lose time to Primoz Roglic rather than gain it.