He’s home. Geraint Thomas became the third British rider and first Welshman ever to take the Tour de France with a fine third in yesterday’s time trial, taken by Tom Dumoulin who edged out Chris Froome by just a second – a result so close that Tissot watches had Dumoulin winning whilst the Tour result had Froome taking the win. In the end it was Dumoulin who won by less than second, a reward for months of consistency and a brilliant pacing effort whilst Froome, booed through much of the French Basque country, lost out on a stage win by the narrowest of margins.

The four-time winner did, however, get to take back his spot on the podium however with his sensational ride on the day pummelling a below form Primoz Roglic, who lost 1:14 to Froome on the day and third place on the podium, although he leaves with no little credit and the stage win. Behind them Thomas was on course for the stage win – he’d gone through the first and second checkpoints fastest and by no small margin of 13 seconds at the latter – but he appeared to wisely come home in his own time to seal a first Grand Tour win and send Wales into raptures.

Down the Top 10, Romain Bardet rode strongly to leapfrog Mikel Landa and then take sixth overall whilst Nairo Quintana kept his top 10 place although he lost enough time to cede ninth to Ilnur Zakarin on a day dominated by the leaders of the general classification.

Green jersey Peter Sagan made the time cut with ease and will have his sixth Malliot Vert tomorrow, although any sort of sprint looks unlikely, and Julian Alaphilippe has his polka dots for the year.

Pierre Latour also sealed the white jersey, confirming that he has a future as a Grand Tour contender very soon even if Bardet was stronger today. 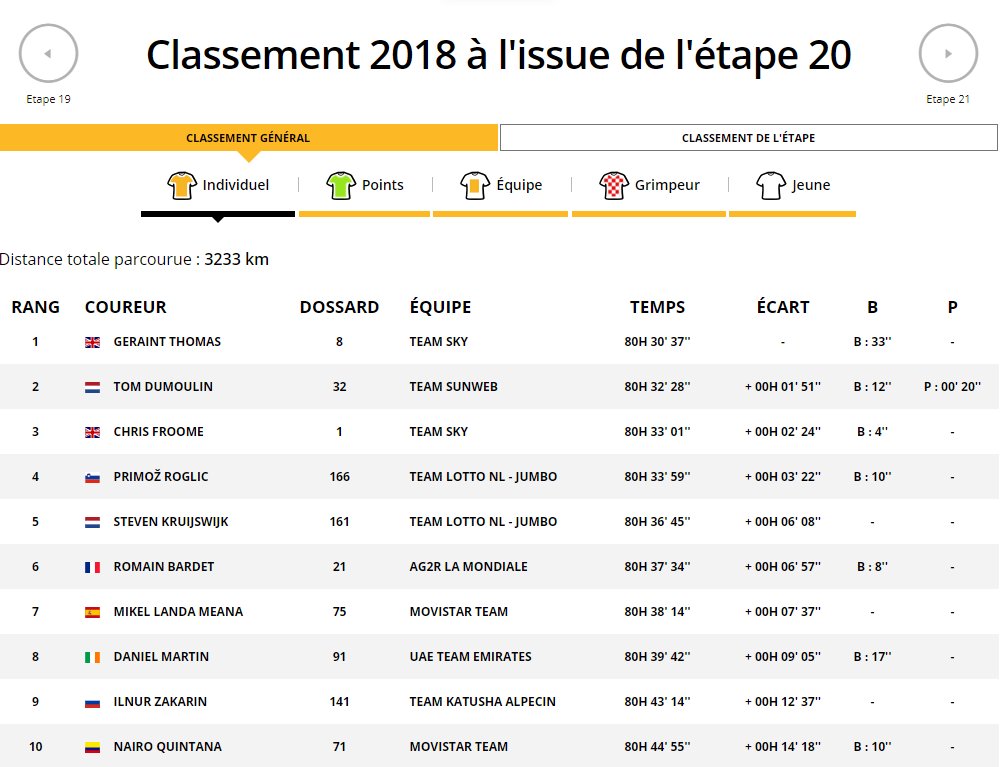 He did not go quietly into the night. From start to finish he put on the afterburners and the boos did not slow him down, but alas, it was not enough for the stage. A podium is a great showing though considering his troubles – or another black mark if you’re anti-Froome. Still, at least he didn’t win eh?

You know this one. Champagne, laughs, poses for the cameras and then the sprint criterium around Paris before a finish on the Champs Élysées.

A big opportunity for the sprinters that have made. Arnaud Demare was best placed by FDJ on Thursday to win going into Pau and now he has another chance to do so on the most famous sprint stage of them all. Jacopo Guarnieri was brilliant for him on Thursday but to repeat that here will be very difficult. Alexander Kristoff hasn’t won a stage but has come close and generally responded well through the third week – this is a tempting final chance for him and those two have been faster than John Degenkolb, the winner of the stage to Roubaix who has been sprinting well.

Christophe Laporte was second in Pau when Demare got the jump on him and edged right – he’ll be looking to go again with Edvald Boasson Hagen too. Sonny Colbrelli has finished second twice but he appears to lack the pace of others on the flatter finishes. Maximiliano Richeze is still left for Quick-Step but the wily Argentine will need to use all of his skills to put himself where he normally would put his lead sprinter.

Watch out for Chavanel to ping off the front at some point too.