Everyone knows what the current Premier League table looks like.

Liverpool and Manchester City are tussling it out at the summit, followed by Arsenal, Spurs, Man Utd, and Chelsea in a frenzied four-fold. There’s a sea of sides in contention to scoop the ‘best of the rest’ 7th position, then down at the other end Huddersfield’s fate has already been sealed, while Fulham’s relegation could be confirmed tonight.

But, how does each club fare if only results from 2019 counted?

Manchester City have the chance to return to the top of the standard table tonight when they face relegation-threatened Cardiff. Rivals Liverpool may current hog top spot, while much has been made of Manchester United’s resurrection under Ole Gunnar Solskjaer, however it’s the Citizens that have enjoyed the best start to the calendar year, accumulating 30 points from a possible 33. Championship form.

That’s 10 wins from 11 games. Surprisingly it was Newcastle with whom Pep Guardiola’s quadruple-chasing outfit dropped points to back in January after the Toon impressively recovered from Sergio Aguero's 24-second opener to win 2-1.

In second spot in the table, courtesy of transfermarkt, are Manchester rivals United who have amassed 26 points this year. Solskjaer passed his initiation with flying colours, suffering only one defeat, to Arsenal who have one point less this year following an admirable run of results.

Meanwhile, Liverpool - who have played a game more than the above three (12) - have to contend with 4th spot. The Reds have only suffered the one defeat in 2019, their only league loss this season, but have been hindered by four frustrating draws which occurred in the space of six matches. However, the club are currently enjoying a three-game winning run ahead of Friday’s visit to Southampton.

Liverpool will be the favourites to grab the spoils in that fixture, but the Saints will be no pushover given their superb start to 2019 - putting them 5th in the table. The south coast side, rejuvenated under boss Ralph Hasenhuttl, have won five and drawn three of their 11 matches this year, meaning they are now five points clear of the dreaded drop zone in 16th.

Southampton’s relegation rivals, Burnley (17th), are also making a real fight of it following a disappointing opening half of the season, with last weekend’s 2-0 victory over Wolves enhancing their tally to 18 points alongside the Saints. 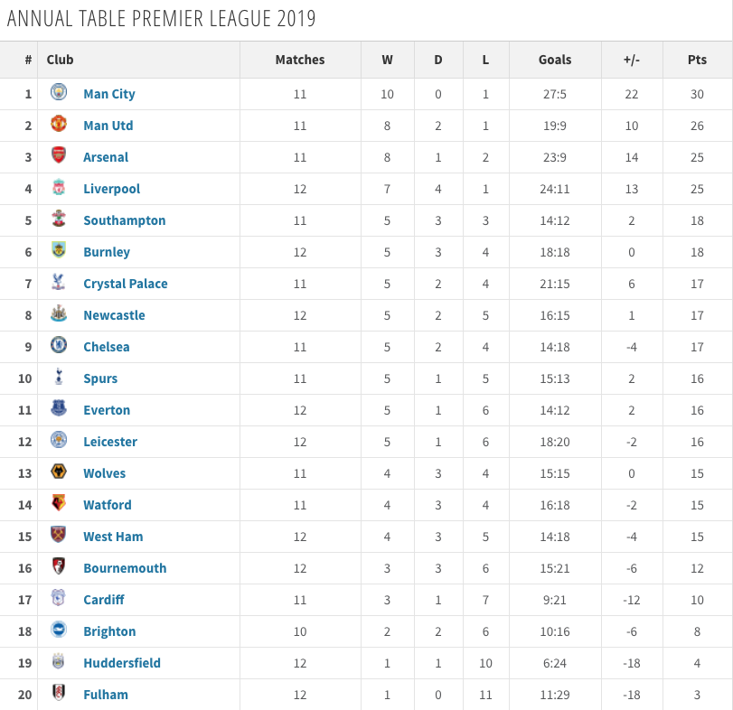 Crystal Palace, Newcastle, and Chelsea are a further point behind, while Spurs squeeze into the top-10 of the 2019 table on goal difference. It was only a couple of months ago that the club were right in the title race, however one point from five games means they are now not even assured of a Champions League spot for next season.

We now dip into the bottom-half of the table where Everton and Leicester can also be found on 16 points. The later changed gaffers in February, luring Brendan Rodgers back down south, and the new ‘manager bounce’ is working wonders so far with nine points scooped up from four matches.

Wolves, West Ham, and West Ham follow on 15 points, although while they feature in the bottom-10 of this particular table it’s worth noting that they are each a win off Saints in 5th.

Bournemouth and Cardiff hover above the relegation zone, which you won’t be surprised to hear contains Fulham who have lost an alarming 11 of their 12 games this year, and Huddersfield who are a point ‘better’ off since singing “Auld Lang Syne”.

Meanwhile, Brighton have endured somewhat of a stinker, registering only eight points, meaning they now only have a five-point safety cushion in the actual standings.