“Welcome to Miami” Will Smith famously sang. Now the world will head to the Magic City for the 2026 World Cup, which should be a true celebration of sport following the Qatar spectacle we are being forced to swallow this winter. Joining Miami as a host city is Atlanta and we take a look at what both places will bring to the 2026 party.

Biggest game so far: Over 70,000 witnessed Brazil beat Colombia 1-0 in an international friendly in 2014.

The city that David Beckham chose to launch his MLS franchise Inter Miami will host games at the 2026 World Cup and the Hard Rock Stadium is one of the most iconic venues in the United States. The home of the Miami Dolphins has been chosen ahead of the home of Inter Miami due to the capacity and this sports mad city should put on one hell of a show.

From Miami Beach to the Everglades, Florida has embraced new sports and the home of the celebrity put on quite the spectacle when they hosted their first F1 race this year - as Martin Brundle battled his way down a celeb-filled grid.

Now Inter Miami have sparked a love for ‘soccer’ and the Hard Rock Stadium should provide a spectacular venue for this World Cup. Or, if you don’t fancy Miami - just nip across to the Bahamas for a couple of days.

Did you know? Miami is the only US city that was founded by a woman, Julia Tuttle. 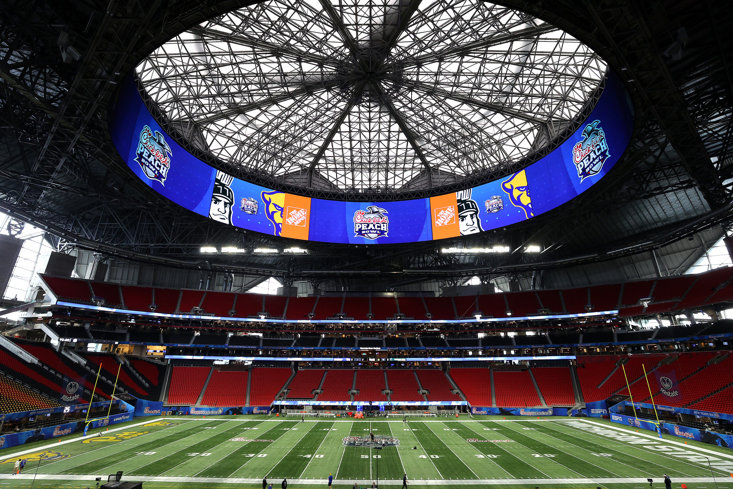 Genuinely one of the most spectacular stadiums anywhere in the world. With a football mad city certain to pack out every game. This stadium looks like something from outer space from the outside, with its jagged design giving it a modern spaceship feel, but from the inside it is an elite sporting venue.

Its defining feature is the 360 degree circular screen that sits above the centre circle and is unlike any other screen anywhere in the world. Only opened in 2017, the technology is at the very cutting edge with beers that fill from the bottom amongst several features that will impress visiting fans.

“Atlanta is a soccer town, and we’re excited to bring the game’s best athletes to the world’s best city,” said Mayor Andre Dickens. “Atlanta has already been home to the Super Bowl and the Olympics, and through our strong collaboration with the State and our business community, we will welcome folks from all over the world to fill every seat in Mercedes-Benz Stadium in 2026.”

Mexico have made this their home from home in the United States, having played three matches here over the last three years but it has been a perfect venue for football fans, with Atlanta enjoying huge success in their short history.

Did you know? Atlanta is the home of Coca-Cola and locals call it ‘Atlanta water’. You can visit Coca-Cola World if you are in Georgia!