The 2022 World Cup feels like a bit of faux World Cup. The human rights issues coupled with the general malaise around the idea of a winter tournament, has caused many fans to look far into the future. With the 2026 World Cup announcing their host cities this week, talk has turned to the hugely anticipated tournament that will be shared between the United States, Mexico and Canada.

To whet your appetite for this far-flung feast of football, The Sportsman is taking a look at the stadia where the 2026 World Cup will play out. In this instalment we head to Toronto and Philadelphia to check out what those two cities have to offer the 2026 World Cup.

The city of Drake, Jim Carrey and Mike Myers is one of just two Canadian cities chosen to host games at this World Cup. It doesn’t take an international man of mystery to work out that this city, that has given so much to football over the last few years, will be a hit when it comes to hosting the biggest event on the planet.

The BMO Field is a rarity in North America as it was actually constructed as a football-specific stadium for Toronto FC, rather than a multi-functional sports venue. This means, although relatively small in comparison to other venues with just 30,00 seats, it's an ideal football venue.

It is expected that capacity could rise to 45k by the time the World Cup comes around either with temporary or permanent seating, but this city, from the CN Tower to Scarborough Bluffs has fallen in love with the sport. This is the largest city in America or Canada without an NFL team, so ‘soccer’ takes centre stage.

Aston Villa, Bolton Wanderers, Tottenham Hotspur, Manchester City and PSG have all played at BMO Field in pre-season friendlies, while an U20 Argentina team featuring Sergio Aguero and Angel di Maria won the U20 World Cup here in 2007. The greatest players in the world will return to Toronto in 2026.

Did you know? The only concert to have taken place at BMO field to date, was by rock band Genesis back in 2007. 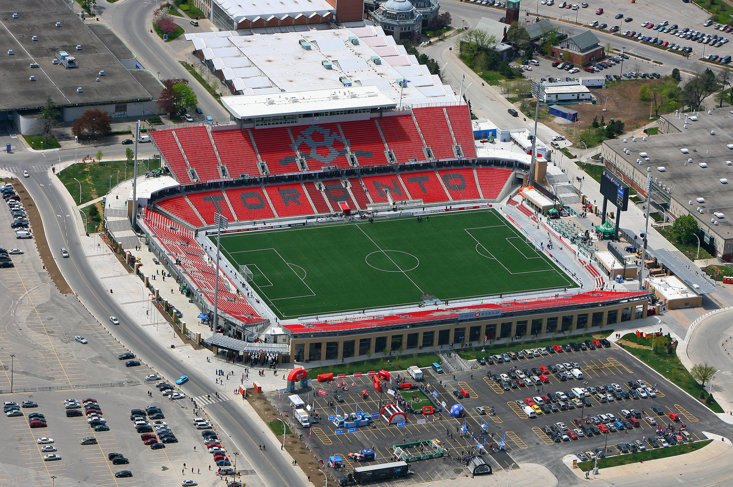 One of the most iconic sports stadiums in the US will host games at the 2026 World Cup. Perhaps more famed for hosting the Philadelphia Eagles rather than Philadelphia Union, finally football will take centre stage in Pennsylvania’s largest city.

They may be outnumbered, but the Union fans have made quite the name for themselves in MLS. The famous Millwall chant, “No one likes us, we don’t care,” has been replicated by Union, and the city is falling in love with the sport. You only have to look at the reaction when they were announced as a host city to understand how much excitement is flowing through these streets.

Despite its American football connotations,  Lincoln Financial Field’s first major event was a football match. In 2003, it opened its doors to the public for the first time as Sir Alex Ferguson’s Manchester United beat Ronaldinho and Barcelona 3-1.

The United States will celebrate its 250 year anniversary in the summer of 2026 and the place where the US constitution was signed will host one hell of a party.

Did you know? This won’t be the first World Cup held at this stadium. In 2003, USA replaced China at the last minute as hosts of the Women’s World Cup and Philadelphia stepped up to host three group stage games.