Kim Bailey is back in the big time.

A quarter of century after he landed the Champion Hurdle and the Gold Cup in the same year, the Andoversford handler approaches this year’s festival with a genuine chance of adding to his championship haul, this time in the Champion Chase.

The horse with real claims on the two-mile chasing crown is First Flow, who has won his last six races, culminating in an impressive success in the Grade 1 Clarence House Chase at Ascot in January where he had reigning champion Politilogue seven lengths adrift in second.

Bailey said of the 9yo “Having a Grade 1 winner is the reason we do it, these are the accolades you get out of the sport. To have him here is great.

“He is certainly a bit of an odd ball and you have to work out the best way of dealing with them. It makes it more fun.”

Also representing team Bailey, is Imperial Aura, who won at the Festival last year, one of just two winners at the March extravaganza for Bailey this century and looks to have leading claims in the Ryanair Chase.

The 8yo is ultra-consistent and has never finished out of the first three in his completed starts but had an uncharacteristic mishap when unseating David Bass at Kempton in January.

Bailey said “Hopefully that will never happen again (the unseat). It was a prime case of he just loss concentration. He is that sort of horse, a little but quirky but he is hugely talented with a good cruising speed and on the whole is a very good jumper. He is as good as we have had for a while.” 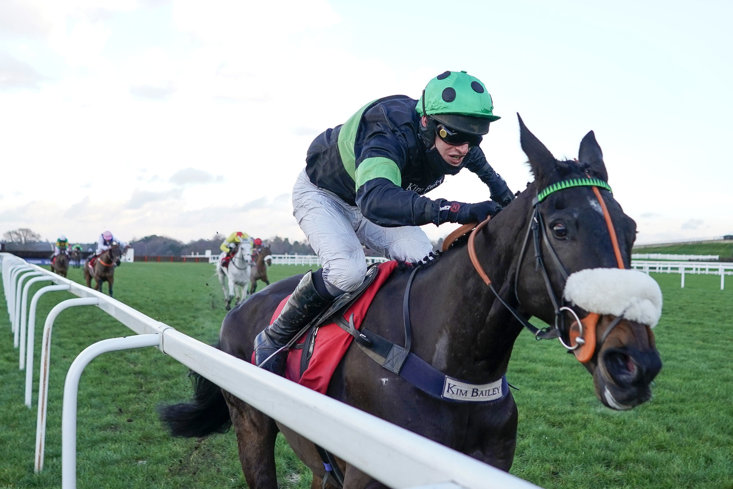 Imperial Aura has been ridden exclusively by David Bass on all of his twelve starts and he added, “He is a really good horse. I rode him first time this year up at Carlisle and thought ‘he’s improved again from last year’ and he was impressive at Ascot (winning a Grade 2) after that."

Of that Kempton tumble he said, “Sometimes even good jumpers make mistakes and I’m convinced that’s all it was."

Happygolucky is one of the market leaders for the Ultima Handicap Chase on day one while the stable also have high hopes for Vinndication, whose target is yet to be decided.

Bailey labelled the talented but fragile 8yo a ‘flag bearer’ for the stable in recent seasons, and he was still travelling well upsides Cloth Cap when coming to grief five out in the Ladbrokes Trophy at Newbury in November. It was still a long way from home that day, but he was conceding 25lb to Cloth Cap, who has improved markedly and heads the market for the Grand National.

It is likely he would have made Cloth Cap work for victory, and on a reading of that form, would be a lively outsider for the Gold Cup, although the Stayers’ Hurdle is also a viable alternative a day earlier.

Hear from Kim Bailey and David Bass on First Flow, Imperial Aura and Vinndication across the Sportsman and Betfred social media platforms on the run-up to Cheltenham, plus other trainers of leading hopes ahead of the four biggest days of National Hunt racing in the Cotswolds next week.