Football
News
The Brazilian was at the top of his game when he made a world-record move to San Siro
Kris Voakes
17:00, 27 Jul 2022

Ronaldo and his agent looked across at each other, gave a nod of the head and shook hands with Barcelona president Josep Nunez and vice-president Joan Gaspart. The Brazilian’s new contract would keep him at Camp Nou into the new millennium, and the paperwork was being printed out ready to sign within minutes.

It was 3pm in the afternoon on a sunny summer’s day in 1997. The two parties agreed that now would be a good time to nip out, have a bite to eat and a glass of cava to celebrate the new agreement, before returning to put pen to paper and wrap up the day’s business.

But when one of the striker’s agents sloped off to take a phone call during the impromptu late lunch, it was Inter Milan president Massimo Moratti who turned out to be on the other end of the line. He was offering to meet Barca’s buyout clause in Ronaldo’s contract and up his wages by a huge amount.

When proceedings returned to Nunez’s office, the player’s representatives suddenly threw in extra road blocks. The agreed terms were no longer agreeable. There was clearly something not right. Barca decided they would play the game and reopen negotiations, but their efforts were futile.

“When we managed to renegotiate the five points they requested, they found a sixth part, which we also solved, and then a seventh,” Gaspart told Goal some years later. But whatever they offered wasn’t enough. Ronaldo was on the verge of tears by the time he told Barcelona that he would be following his agents’ advice to accept the offer from Inter.

And so it was that Ronaldo, the man who had just netted 47 goals in 49 games in his first Barcelona season, was confirmed as an Inter player for a world record transfer. The Nerazzurri had left Barca with no choice but to sell, having met the €21 million release clause, but Barca went to Fifa and complained anyway. They got an extra €2.1m out of it but never again did Ronaldo pull on a Blaugrana shirt. 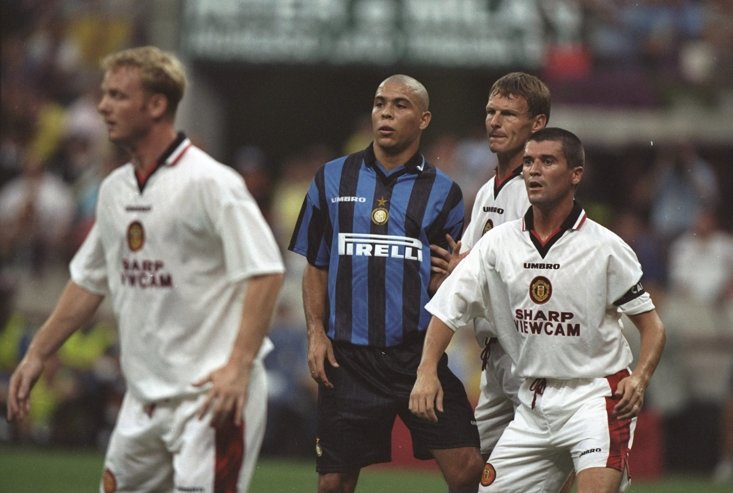 RONALDO MAKES HIS DEBUT AGAINST MAN UTD AT SAN SIRO

On July 27, Ronaldo wore blue and black for the first time, lining up in a 1-1 draw against Manchester United in a San Siro friendly which attracted over 50,000 fans. “Ronaldo is a costly present to Inter fans, I’m sure it will pay off,” said gloating Inter president Moratti after his stealthy purchase of the fantastic 20-year-old, and in the first year or so it looked like he was right on the nose.

Ronaldo scored 34 goals in his first season at Inter, including a Serie A-leading 25 in the league which so nearly brought a first title in nine years to via Durini. The incident in which he was fouled in the area by Juventus’ Mark Iuliano in a virtual title-decider only for the referee to wave play on and then award Juve a decisive penalty only seconds later remains the stuff of much-contested legend in Italy.

He still led Inter to major success during that campaign, scoring the clinching goal in Inter’s 3-0 Uefa Cup final win over Lazio in Paris, but after his pre-match health scare at the World Cup final that summer he then suffered serious knee injuries which would blight much of his career at San Siro.

First he ruptured tendons in his right knee in a 1999-2000 match against Lecce, then he suffered a horrific relapse six minutes into his return in the first leg of that season’s Coppa Italia final. “His kneecap actually exploded and it ended up in the middle of his thigh,” his physiotherapist Nilton Petrone later told FourFourTwo.

The fact that he came back to be Brazil’s catalyst in their 2002 World Cup win and completed a moderately successful move to Real Madrid later that year said much for the resilience of the man, but he was never that brilliantly explosive centre-forward again. That year at Barcelona and the early stages of his Inter career were when he was at his peak.

The young kid lighting it up at PSV had gone on to have a huge say at two of Europe’s most storied clubs, had won the Ballon d’Or and two Fifa World Player of the Year awards. He was a two-time World Cup winner, a two-time La Liga champion and holder of many other winner’s medals. But to everybody who saw him play he was so much more.

You can understand why Moratti was so keen to hijack those contract talks 25 years ago to make him one of Inter’s most iconic players in club history.