Football
News
The Renningers had travelled all the way from Rhode Island to Manchester
Simon Lillicrap
16:41, 10 Feb 2020

Matt Renninger had it all planned. The tickets had been booked a year ago, flights, accommodation, nothing was left to chance. He was flying over 3,000 miles from Rhode Island, US, at a cost of £3,000 with his wife Missy, to finally watch his Manchester City heroes play at home in the Etihad Stadium.

The fanatical Blues fan even set aside time for a special announcement on social media, following a stadium tour. He had this.

But Storm Ciara would put an end to his perfectly laid plans. Instead of watching Pep on the sideline and the likes of Raheem Sterling and Kevin De Bruyne grace the pitch, he’d have to settle for Altrincham vs Kettering Town, at the much less glamorous Moss Lane.

City officials were forced to call off the game against West Ham on Sunday morning, citing fears for the safety of fans in the 80mph winds.

Recalling the moment he heard the game was cancelled, Matt told The Sportsman:

“We were just in bed at the hotel relaxing when I saw on Twitter about the safety meeting. We stayed put and checked that refreshing Twitter constantly for an hour until they announced the cancellation. It was crushing, we were devastated. This was such a special trip for us, - a ‘babymoon’ if you will. But there was nothing we could do.”

The couple, who married in December 2018, used the trip to announce online that they were expecting their first child. After touring the Etihad in sunnier weather on Friday morning, they posed with a mini-City shirt in the tunnel for the baby that is due to be born in June. 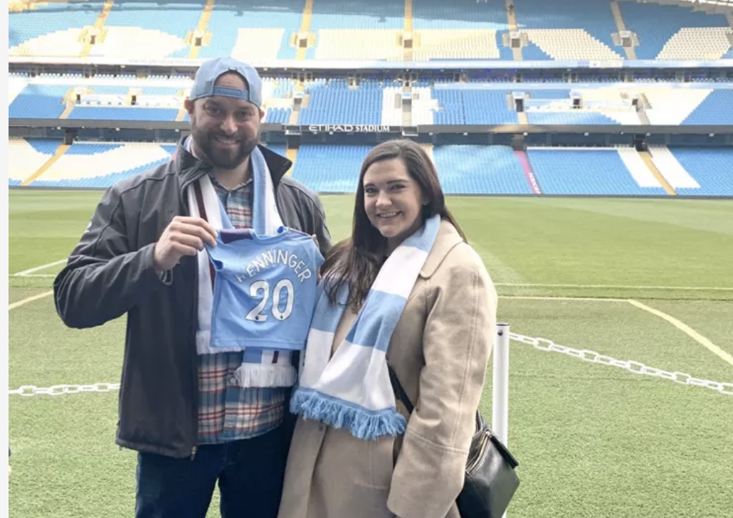 “I’ve been a City fan since 2002 and seeing a match at the Etihad was always on the bucket list. With a baby on the way in June, we figured this might be the only chance to see them with Sergio Aguero, Pep Guardiola and the current boys,” says Matt. "We at least got to do a tour Friday and we made our pregnancy announcement on Facebook around it. To be fair the weather was really bad yesterday morning so we understand, just very disappointed.”

Matt’s love for the Citizens began in college as he looked to support the underdog in Manchester, at a time when nobody could have envisaged the wealth and success the club would have today.

He says: “I bought FIFA during freshman year, I didn’t know there was another Manchester team actually and since all the chatter in the States was always about United I decided to root for the underdog and hope for the best. Admittedly that has worked out pretty well.”

With American stars such as Claudio Reyna and DaMarcus Beasley playing in Sky Blue over the years, Matt’s love for the Citizens grew even from afar. Now, he never misses a game, visiting Man City bars in New York, Boston and Washington DC. 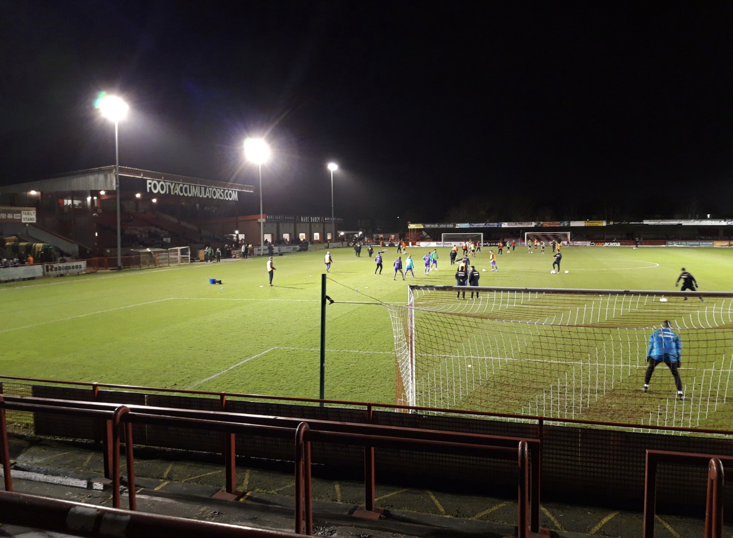 The Renningers' trip to Manchester would have been a football-less affair if they had not visited Altrincham on Saturday afternoon to take in the delights of the National League North. The 6,085-capacity Moss Lane may be a long way from the glitz and the glamour of the Premier League but at least they saw some goals, in a 1-1 draw.

“Yeah, we went to the match against Kettering Town,” adds Matt, “our friends had recommended the market and I wanted to take in a lower-tier game to really have the experience of the intimacy of small grounds and passionate local supporters. As it happened both goals went in at our end and we loved it!”

All in all, the American couple spent around £3,000 on their trip over from the States and are off to Edinburgh before flying back home on Thursday. With City’s fixture against West Ham still yet to be rearranged, it looks certain they will miss out on seeing their team live, but that hasn’t put the pair off coming back for more. When asked if they have plans to return Matt said:

“Oh God yes, we just don’t know when that opportunity will be. We would love to this season before our son is born but that’s unlikely. Maybe next season or the one following that depending on feasibility.

“As devastating as it was to not see City play, it hasn’t been a wasted trip. We love travelling together and at the end of the day we’re in the UK on vacation - there’s worse places to be that’s for sure!”

With the baby due this summer and having missed out on seeing City legends such as David Silva and Aguero in the flesh, Matt was asked whether we could potentially see a baby Sergio born in Rhode Island this June.

“Haha we do have a name picked out, that’s between us for the time being, but I feel like that may have been one step too far for my wife,” he laughs.