Us Sports
News
The quarterback legend led the Buccaneers to a convincing 31-9 victory
Simon Lillicrap
03:13, 08 Feb 2021

Tom Brady has done it again. The greatest quarterback in the history of the game won his seventh Super Bowl, more than any team in history. That’s right, Brady alone has now won more Vince Lombardi trophies than any team ever has. The man is simply irrepressible.

The Tampa Bay Buccaneers’ 31-9 win over the Kansas City Chiefs wasn’t a one-man effort, even if it seems Brady was the brains behind the entire operation. His decision to tempt former Patriots teammate Rob Gronkowski out of retirement and bring him to the Buccaneers paid off in emphatic style as Gronk crossed twice in a scintillating first-half display.

That double meant Brady and Gronk were record-breakers, as if Brady needed any more to his name. They have now combined for 5 Super Bowls pass touchdowns and 14 postseason TDs, both marks being the most by any two players in NFL history, once again showing the sort of chemistry that has been in evidence between the pair throughout their illustrious careers.

As well as tight end Gronkowski, wide receiver Antonio Brown and running back Leonard Fournette were also identified as potential targets by Brady when he first joined Bruce Arians’ side. How fitting that those on Brady’s wishlist would all score touchdowns in the biggest game on the planet. When the 43-year-old tells you who he wants, you go out and make it happen. The Bucs have reaped the benefit of their unwavering faith in Brady. 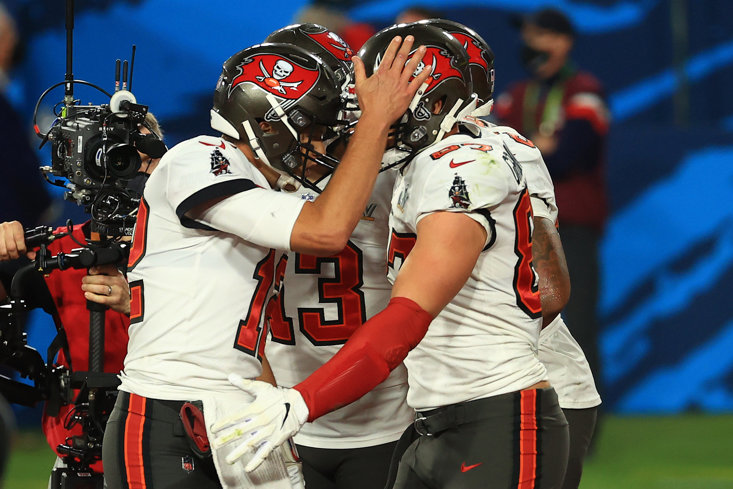 BRADY AND GRONKOWSKI MADE HISTORY WITH TWO MORE TOUCHDOWNS

It was an utterly dominant display from the Buccaneers but the Chiefs shot themself in the foot on more than one occasion, playing like a team caught in the headlights, rather than one which had the experience of success on this very occasion 12 months ago. In the first half alone the Bucs gained more first downs from penalties than any team previously had in a whole game in Super Bowl history, showing just how much immaturity the Chiefs played with in that first period.

With the constant pulls and tugs, the Chiefs could not get a foothold in the game in the first half. A key turning point happened as Tyrann Mathieu made an interception after a Brady pass was tipped, but another holding penalty meant the Bucs got a fresh set of downs. Within moments, Gronk had scored his second touchdown with a powerful run to put Brady’s side 14-3 ahead.

Another penalty for pass interference allowed Brown to extend the lead to 21-3 at half-time, scoring the touchdown with just six seconds left as Brady found him with a low fizzing pass. The only people who were as disorientated as the Chiefs defence at half-time were The Weeknd’s dancers, who put in a dizzying performance backstage as he performed ‘I Can’t Feel My Face’ in a hall of mirrors. 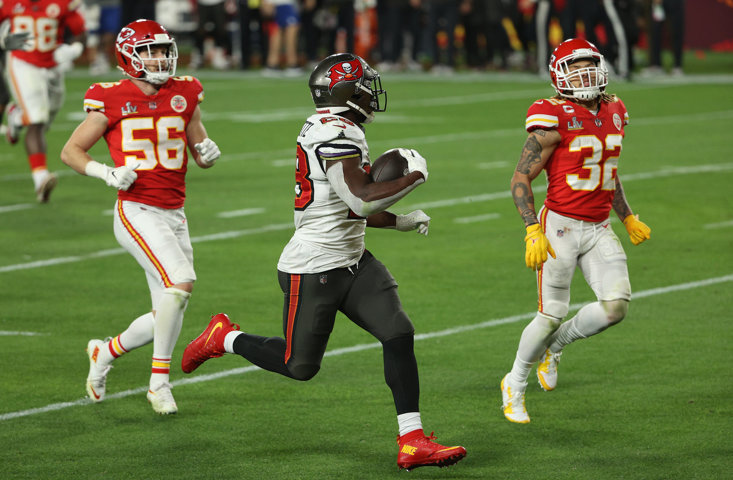 The Canadian put on a hell of a show, finishing on the field with a mesmeric rendition of ‘Blinding Lights’, surrounded by a marching unit of performers and illuminated by a backdrop of fireworks. However, it was the Bucs who exploded in the second half as they extended their lead to 31-9 after Fournette ran 27 yards to cross in the third quarter. Shaq Barrett deserves a creditable mention for hounding Patrick Mahomes all night long and not giving him an inch as Brady comfortably won the battle of the superstar quarterbacks.

At 43, Brady has just won the Super Bowl with his new team at the very first time of asking. Forget comparing him to Mahomes, or even any other American football player from history, nobody comes close. Now, he belongs right up there with the greatest sportspeople we have ever seen.