Football
News
There are plenty of interesting fixtures to get into this weekend
Jack Porter
09:01, 25 Jan 2020

At first glance, plenty of people immediately wrote off the FA Cup fourth round pairings as a collection of bore draws. There were no blockbuster all-Premier League big gun contests, no obvious giant-killing opportunities, no local derbies.

But dig a little deeper and there are some absorbing storylines set to unfold over the coming weekend. It also helps that as the third-round ties came to a conclusion, more and more compelling fixtures were revealed.

Over the next few days we could well see the FA Cup deliver once again, just as it has done for the past 150 years. And here's how.

Everyone's wondered at some point or other what it would be like to share a stadium with your rivals like AC Milan and Inter do at San Siro. Well, on Saturday, Coventry and Birmingham will find out.

It's tenants versus landlords at St Andrew's - San Andrew's for one time only - as Coventry's ground-share arrangement during their expulsion from the Ricoh Arena throws up a curiosity of a fixture. With the pair currently competing in different divisions - Birmingham in the Championship and the Sky Blues in League One - only an FA Cup fixture was going to bring a clash between the pair.

Coventry have sold more tickets with their higher allocation of 10,500, but Birmingham have shifted a respectable 9260 at the last count having been given much of the home allocation of St Andrew's due to the unique nature of the tie.

You can buy a historic half-and-half scarf for £12 - no, us neither - but most importantly you should be keeping an eye out for Callum O’Hare. Identified as ‘the next Jack Grealish’, he is a Brummie boy loanee at Coventry from Aston Villa who will no doubt revel in the opportunity to play against his parent club’s city rivals.

Match of the Day
@BBCMOTD
Coventry's win means they'll host Birmingham in the #FACup fourth round...
At Birmingham.
Coventry currently play their home games there.
Birmingham will be at home... but will be the away team ðŸ§
362
3110
Advertisement

These, in essence, are two clubs still trying to get over Mauricio Pochettino. Southampton have had six managers in the six years since the Argentine's departure for White Hart Lane, while most Spurs fans are yet to come to terms with the departure of their most adored manager in years back in November.

While the jury’s still out on José Mourinho at Spurs, Saints have finally found some identity under Ralph Hasenhüttl, even if he has an underwhelming playing group and had to come out on the wrong side of a 9-0 scoreline against Leicester earlier this season to really show his mettle.

The two sides last met mere weeks ago on New Year’s Day, with Southampton producing a 1-0 win which has been typical of their recent upturn in form. They're mid-table these days despite their relegation form of the early part of the season and are just three points behind Mourinho's Spurs.

This is exactly the kind of fixture which has tripped Mourinho up at Chelsea, Manchester United and Spurs in his last three jobs in England, so don't be too surprised if the Saints juggernaut rolls on. Either way, it should be a belter.

While West Ham fans jostle with their own prejudices amidst links with their former magic man Dimitri Payet, they will see another old-boy return on Saturday as former gaffer Slaven BiliÄ‡ brings his West Brom side to the London Stadium this weekend.

Under the Croatian, the Hammers enjoyed the best period of this millennium, with BiliÄ‡ their most beloved boss since the days of Harry Redknapp.

BiliÄ‡ has been outspoken on West Ham's inability to cope with the 2016 transition to the shiny but sterile London Stadium in Stratford from the historic and rambunctious Upton Park, and it is arguable that the Irons have never quite recovered from losing their old home.

Nowadays it’s Moyesey: the sequel, with the Scot in his second spell at the club and again fighting against the drop. BiliÄ‡’s West Brom, meanwhile, are perched atop the Championship but enduring a dire run of form that has seen just one league win since December 11.

Which West will come out best? 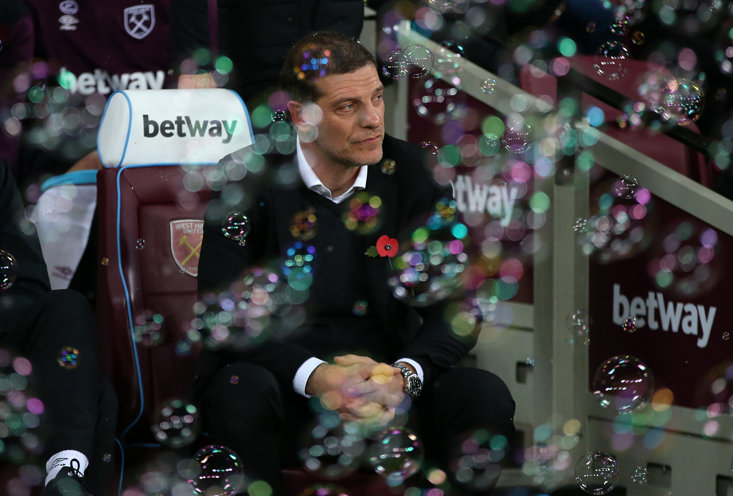 Out of the running for a historic third successive Premier League, City are now perceived to have the Champions League at the centre of their sights. But Pep Guardiola could see the chance to become only the seventh club to retain the FA Cup as a key target too.

Their next obstacle is the aspiring Fulham. In their past four meetings in all competitions, City have struck 12 goals without reply but Fulham feel like a different prospect under Scott Parker to the one led by Claudio Ranieri and Slaviša JokanoviÄ‡ as the Cottagers slipped meekly into the second tier.

For a start, Fulham are one of the form sides in the Championship at a time when long-time runaways West Brom and Leeds United are leaving the door wide open for the chasing pack to challenge for automatic promotion. Parker has got them ticking and it will be a testament to his nascent managerial career if he produces a result at the Etihad to qualify for the fifth round and move to within two wins of an unlikely trip to Wembley.

Though most of the attention will undoubtedly be on Manchester United’s identity crisis, League One relegation battlers Tranmere Rovers have an extremely tough ask in being required to play their fourth round tie merely a few days after qualification at the expense of another Premier League side in Watford. That game was played out on Thursday on weather-beaten turf more suited to the Battle of Bull Run than Birkenhead.

“A lot of hard work has gone into the pitch,” Rovers manager Micky Mellon said in the aftermath of swatting away the Hornets in Tranmere’s midweek replay. “Everyone complains about it and we say ‘We have to play on it as well, more than you’.

“We got it on and it was a good game on there. [Watford manager] Nigel Pearson wouldn’t moan about it because he’s a good guy.”

Depending on the result on Sunday, beleaguered Red Devils boss Ole Gunnar Solskjaer might not be so gracious! It has all the elements of a true FA Cupset too, with the quagmire surface reminiscent of many glories ties of the past. Then there's the giant-killing mastery of Tranmere and the current woes down Old Trafford way.