There are a few things that immediately spring to mind when it comes to Pep Guardiola. First, there is success; he has won 28 trophies in his managerial career to date, and could well add to that total by the end of the season. Next come the words ‘tiki taka’, synonymous with him despite his hatred of the entire notion; the football his teams play is not only incredibly good to watch but so progressive it is constantly breaking new ground. Finally, something that doesn’t always get mentioned, and can quickly turn from being a positive to a negative; intensity.

A club managed by Guardiola will have a chaotic atmosphere around it from the moment he walks through the door until the moment he leaves. There is an all-encompassing desire to win in his image that waits for nobody, to thrive under the Spaniard takes everything a player has to offer mentally and physically and nothing less is accepted.

Unsurprisingly, that can become exhausting for everyone involved; Guardiola has refreshing ideas when it comes to his players’ relaxation time, he insists they spend time with their families, even if training and focussing may be more suited at that particular time. But that is because even he has understood just how much he and his methods can be to take every day. This is his fourth season at Manchester City, his joint-longest spell in charge of any club, and there are signs of wear and tear beginning to emerge.

It was the same at Barcelona, where, in 2012, he walked away. In 2008, he had stepped into the Camp Nou role a fresh-faced 37-year-old looking to make an imprint on one of the toughest jobs around. With 14 trophies in that era, he definitely did that, but he was obviously exhausted by the end; the cocktail of managing the best players in the world, expectation, internal politics and scrutiny had become so difficult to manage, he needed a year away in New York to recharge his batteries.

The manner of losing the La Liga title to his rival Jose Mourinho, who fuelled the pressure more than anyone, and Real Madrid, as well as their Champions League semi-final exit to Chelsea that season, suggested the team needed a new voice too. At Bayern Munich, where he won the Bundesliga in all of his three years in charge, he was conscious of the burn out again.

Despite never getting past the last four in Europe, he departed for City in 2016, desperate not to outstay his welcome. In England, he has altered the way everyone sees the game, and proven the opinion that his dynamic and high energy approach couldn’t dominate completely wrong.

Over the past two years, he has shown his team has the ability to conquer all, but also endure and withstand a great deal of competition, inspiring them to 14 straight wins to fend off Liverpool and retain their Premier League crown last season. This year, the Reds have taken over and sit 22 points clear with a game in hand; it really does feel like that consistency is taking a toll now. 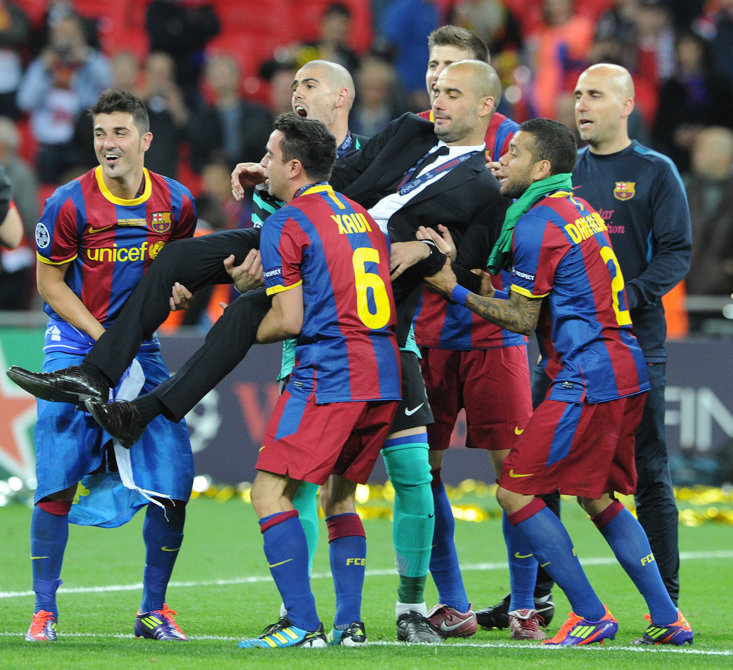 The same target Guardiola missed at Bayern is still evading him; the Champions League. He hasn’t lifted it since 2011, in his third season with Barcelona, and there are some who use this as a stick to beat him with, despite only Carlo Ancelotti and Zinedine Zidane having better records in the competition’s modern era. He so desperately wants to add to his total with City, and the fact they are favourites to go all the way with some bookmakers, there is scope for optimism this year.

Zidane and Real Madrid are their last 16 opponents, and getting over that hurdle could be a watershed moment. Given that winning the Champions League is arguably the reason Guardiola came to City in the first place, it is a surprise that they haven’t managed it in the past two seasons when their consistency was at a ruthless level.

There are other factors for their drop off, injuries and some questionable decisions in the transfer market are just two, but the reality is that Guardiola’s management hasn’t stood the test of time beyond three years before, and becoming European champions this season would round off his time in England well, amid speculation that he could leave in the summer.

If they were to do that, there would be a fair argument to suggest it is his greatest achievement as a manager to date. He’s proven what he can do when his ideas are fresh, but so far his sides have hit a peak and he hasn’t long left afterwards. City still have the quality to succeed in Europe, even if they are showing signs that the intensity of Guardiola is becoming a bit too much; doing so would add another layer to the argument of the manager’s greatness.