He is a giant from Gdańsk living out a Super League dream, and one day wants to dominate the NRL.

Mikołaj Olędzki has become one of the most feared front-row forwards in the British game, and after capping an impressive season with a first ever inclusion in the Betfred Super League Dream Team, the 24-year old hopes to end it with glory for Leeds Rhinos and England.

“I’m at a point in my career now where I’m really hungry for some silverware and I want it to be with Leeds who are building a really great team,” the prop tells The Sportsman, in his unique Polish-Yorkshire twang as the Rhinos prepare for their playoff eliminator at Catalans Dragons.

“The talent, enthusiasm and determination to win trophies is all here at Leeds right now. There is something special building.”

Olędzki knows what it takes to build something special.

He arrived in the UK from Poland’s sixth biggest city with his family at the age of nine, settling in Corby where his dad had landed a job. A promising diver as a child in Warsaw, the youngster learned about work ethic from an early age. His head was always upside down on the gymnastics mat, in school books, or in the water, to the extent that mother Izabela - a former international rower - recalls he didn’t have time for a childhood.

Olędzki excelled at county level in the UK too, swimming for Northamptonshire until the family moved to Leeds.

That was where the fast-growing teenage frame fell in love with competitive team sport, and rugby league in particular, picking up his first rugby ball aged 13 and signing for the Rhinos’ academy just two years later.

Four years later he became the first athlete from Poland to play Super League rugby, marking it with a try on his debut. And despite his tough and unusual route into the game, Olędzki has not looked back.

Leeds cult hero Barrie McDermott, an iconic Headingley prop of the nineties and noughties, raves about Olędzki, seeing him as a dominant, generational talent.

“I love watching Mik because he uses his size and raw power to outstanding effect,” McDermott tells The Sportsman.

“He has a defence-scattering running game and is a ferocious tackler. Fit, fast, agile and I see his game and skillset evolving each year he plays.

“I would have loved to have played in the same team as him as I know he’s a fantastic team-mate and can be the cornerstone of the Rhinos pack for the next 10 years.”

Leeds may face a fight on that one however, with Olędzki honest about his desire to keep challenging himself against the game’s very best, which would ultimately be in Australia’s NRL. His contract with Leeds has another three years to run and he wants that to be three years of trophy success in his beloved blue and amber.

His sole trophy with Leeds to date - the 2020 Challenge Cup - has barely touched the sides of Olędzki’s ferocious appetite.

This season hardly seemed destined to change that. Head coach Richard Agar walked away early on in the season with Leeds in wretched form and staring at relegation.

The Rhinos may have stumbled into the playoffs off the back of two unconvincing displays in defeat at Catalans and in a narrow, crucial win over Castleford, but to make it at all underlines the giant strides made under boss Rohan Smith.

“I’m so happy we have made the playoffs,” Olędzki admits.

”It’s a massive achievement for us after the awful start to the year we had. Now we have to reset ourselves, forget about the last two games and get back to what we have been doing so well before that, which is throwing the ball about with a smile.

“We have shown togetherness and bravery through some tough games in the last few weeks where it has gone down to the wire. That resilience and willingness to work for each other has got us over the line.” 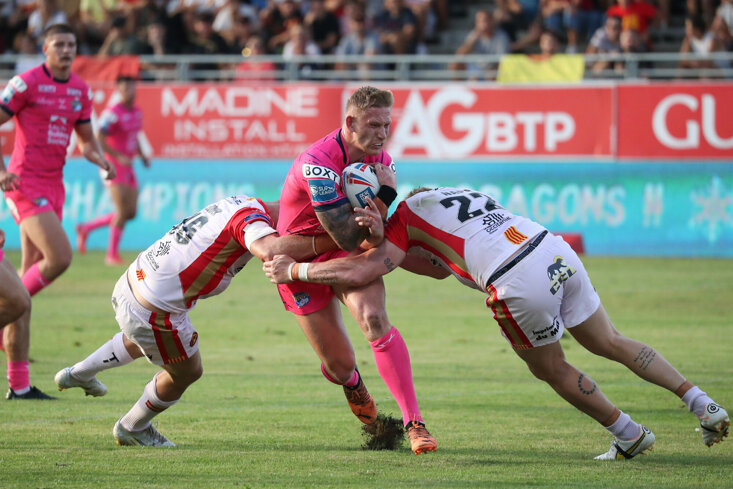 Twice under legendary coach Brian McDermott in 2011 and 2012 Leeds won the game’s biggest prize from fifth, so what chance another run against the odds ten years on?

“At one point this year we were 12th which is probably a new record!,” Olędzki recalls of their painful early-season travails under Agar.

“But when Rohan came in he took a lot of pressure off us straight away. He understands that we don’t need pressure piled on us while we are playing by telling us not to do too much, so he’s just taken that off us, especially the young guys.

“He’s told them to go and enjoy themselves, reassured them they are here for a reason and that’s because they are good players. So just enjoy your rugby and the rest will take care of itself. That’s what we have done and you can see it in the way we thrown the ball about and know it is never too late to win a game.”

Leeds will be underdogs in Perpignan, and will not have a home game if they are to make it back to Old Trafford for the first time since 2017,  the year Olędzki made his senior debut.

“The boys don’t know when they are beaten. Rohan has done a really good job at  giving us that free pass to play and enjoy our rugby, so who knows where that can take us.”