England’s chances of winning this year’s Rugby League World Cup have been “significantly increased” by a controversial pledge of allegiance from Sydney Roosters forward Victor Radley.

That’s the view of Great Britain legend James Graham who spoke exclusively to The Sportsman after the Sydney-born Radley confirmed his intention to play for his father’s country of birth this autumn.

In doing so the 24-year old loose forward sacrifices any prospect of playing for the Kangaroos or State of Origin in the future, while giving an enormous boost to England’s hopes of toppling Australia and New Zealand.

“This is a good news story,” an animated Graham tells The Sportsman.

“I understand that some people have their reservations and they want people who have grown up in England their whole lives. But the world has moved on from that and I’m absolutely delighted.

“This shouldn’t be seen negatively. Anyone who has anything negative to say about this you need to take a good, hard look at yourself because you have not got England’s best interests at heart. If you are putting a negative spin on this then you are the problem.”

Graham was one of the first people Radley spoke to after making the biggest decision of his career, and one that has got rugby league fans talking. Radley is born and raised in New South Wales but will fly the flag for his English dad Nigel, a Sheffield Wednesday fan.

“I spoke to Victor on Sunday and he had a genuine decision to make about whether to give up and sacrifice the opportunity to play for New South Wales in Origin and come and play for England,” Graham reveals.

“When he spoke to me I really enjoyed listening to him because he spoke about taking time to make this decision, and this feeling in his chest and that is what playing for England means to him. If he already has that passion then I have no doubt that he is going to be all-in for England, this isn’t just an opportunity to play in the World Cup. 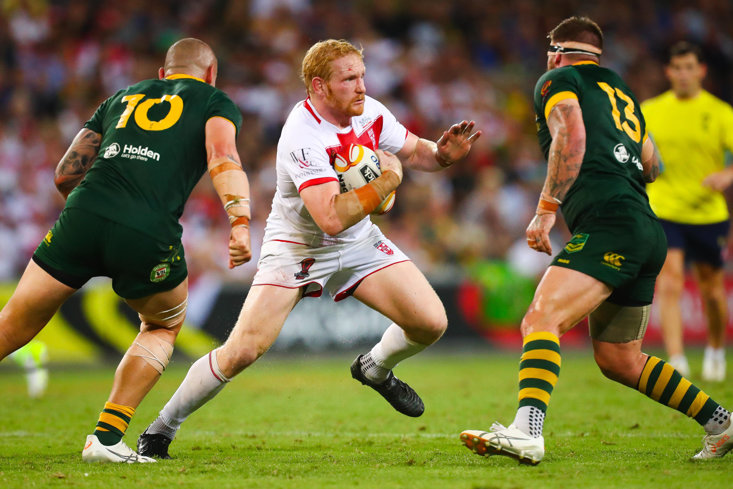 “Speaking to him, it has put my mind at ease. I was excited by the news. I knew he was eligible but it is a huge call for him and I’m delighted. I have played in England teams with players who have an Australian accent. They say that it means something and who am I to say it doesn’t. Everyone I have played with I have trusted that they are doing it for the right reasons.”

Graham is speaking to The Sportsman from Sydney where he is happily retired but remains an ardent England fan, craving the success that so cruelly evaded him. He suffered the heartbreak of a 2017 World Cup final defeat to Australia, and was agonisingly denied in the final seconds of the semi-final against New Zealand four years earlier. Graham believes Radley is ready-made for those huge games against the Aussies and Kiwis, and says England fans who haven’t seen much of the player in the NRL are in for a treat.

“He is a very, very skillful 13 with a beautiful short-passing game. He mixes his running and passing game up really well. And he defends like an animal.

“He is just in your face, super aggressive, up for the challenge, takes people on and goes after people. I really like watching him play. He is close to the line at times in terms of what he should and shouldn’t do, he got sin-binned twice in the same game last year so he can be a hot-head but is great to watch.

“All the English fans, players and coaching staff are going to be impressed with how he goes about his business."

Radley’s announcement is more than a declaration of availability.

The player held talks with Shaun Wane on the England head coach’s recent trip Down Under, and barring injury will be straight into the squad for the autumn. More than likely he will be straight into the starting 13, and in the 13 shirt currently being contested by John Bateman - who started there last month against the All Stars - and St Helens powerhouse Morgan Knowles.

“Knowles and Radley are very similar,” says Graham, who was himself idolised at Saints for whom he won the Grand Final in a dramatic last ever career game.

“But I do feel that if the balance of the team is right then you could accommodate both of them. They are highly competitive individuals who want the best for the team they represent.

“Our pack is our greatest asset and has been for generations. Now I’m thinking about how our side might look and the attributes that England possess, the prospects of lifting that trophy in mid-November have just significantly increased.”

Graham also believes Radley may not be the last Aussie to pledge his allegiance to England.

Wests Tigers half-back Jackson Hastings has already represented Great Britain, although both he and Wane have been coy this year on the former Wigan man’s potential involvement later this year.

“That is up to his form and he is in a team that is struggling. I played with Hastings for Great Britain and I didn’t have a problem with him representing GB, I enjoyed it. I get why he wanted to do it, I understood his reasons. I believe he wanted to represent us so was delighted to have him.

“As long as anyone’s reasons are legitimate I would be happy to watch them lining up in white.”