Manchester United left it late in their 1-0 home win over West Ham United. Marcus Rashford made it two goals in two games with an injury time winner to hand the Red Devils hope in their pursuit of the top four.

The Red Devils had the better of the first half, but neither side mustered a shot on target in the opening 45 minutes. A knuckleball cross from Bruno Fernandes almost found Cristiano Ronaldo, while the latter also had a penalty claim waved away after alleging he was nudged while trying to reach an Alex Telles delivery. Ralf Rangnick’s side lacked the clinical edge to take advantage of the momentum they enjoyed.

The second half opened with Fred going close, as the Brazilian midfielder forced a great save from Alphonse Areola with a top-corner hit. Jarrod Bowen almost put the Hammers into the lead against the run of play, but could only strike his effort into the side-netting. Raphael Varane then headed a Telles corner over the bar as United continued to labour for an opener.

The goal arrived in the third minute of added time, continuing a fine tradition of late goals from this football club. Marcus Rashford converted an unselfish square ball from Edinson Cavani, and the goal survived the scrutiny of a VAR check. This victory, snatched as it was from the jaws of a draw, could prove vital in Rangnick securing Champions League football.

The Brentford Community Stadium played host to one of the stranger first halves of the season, as a drone interrupted The Bees’ clash with Wolverhampton Wanderers. The aircraft was repeatedly flown overhead, and the referee saw fit to remove the players from the field of play due to safety concerns. An earlier clash between Brentford’s Rico Henry and Matthias Jensen had already halted play, with both players being substituted with head injuries.

The game struggled to find a rhythm after the restart, and the belated arrival of the second half brought more stoppages. Referee Peter Bankes had to leave the field of play due to a technical malfunction with his microphone, adding to an already bizarre afternoon. 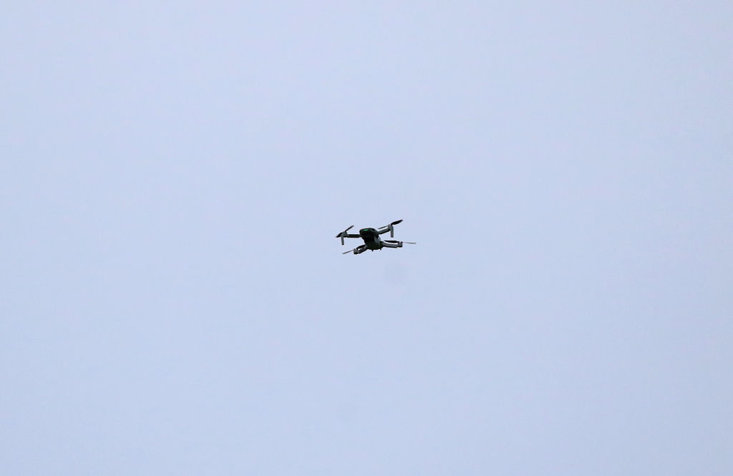 the offending drone flying above the brentford community stadium

After a series of unfortunate events, there was finally a quality footballing moment to savour when Joao Moutinho put Wolves into the lead. A classy finish from the edge of the box saw the Portugal midfielder notch his second goal in three games.

Toti Gomes was shown a straight red for a lunge on Kristoffer Ajer, but the decision was reversed after a VAR check. No sooner had this incident concluded than Ivan Toney put the home side on level terms with a superb volley. The Bees did not have long to revel in parity, as Ruben Neves scored for the visitors seven minutes later. Wolves would have a further goal, scored by Tottenham Hotspur target Adama Traore, ruled out by VAR deep into injury time. In the end, it mattered little as Bruno Lage's man left West London with three points.

In further aircraft news, an aeroplane carrying a banner imploring Prime Minister Boris Johnson to resign was flown over Elland Road ahead of Leeds United’s meeting with Newcastle United. The travelling fans spent the early part of the season making similar demands of former manager Steve Bruce. The Toon Army will feel a lot better about Eddie Howe after a 1-0 win that sees them leapfrog Watford into 18th place.

Newcastle’s attack was blunted when Joelinton pulled up with an injury to his heavily-strapped left thigh. Paul Dummett would also leave the field through injury in the second half, after a strange volley back to his own goalkeeper, Martin Dubravka.

Newcastle got payback for their misfortune when Jonjo Shelvey scored the decisive goal with a low free kick that caught Ilan Meslier out. The Leeds goalkeeper was wrong-footed as the ball ran through a sea of legs and into his net. A vital win on the road for the relegation-threatened Magpies.