With seven games of the 2012/13 Premier League season remaining Sunderland took one last roll of the dice. Out went Martin O’Neill and in came Paolo Di Canio, who had one task: to keep the Black Cats in the top-flight.

The fiery and flamboyant Italian enthralled and entertained during his playing days in England at Sheffield Wednesday, West Ham and Charlton, before he returned to these shores in 2011 as Swindon manager, a club he would lead to the League Two title in 2012. He then abruptly quit in February 2013 due to off-field issues.

Seven weeks after his surprise departure Di Canio arrived at the Stadium of Light, in an appointment which wasn’t without controversy. Sunderland’s vice-chairman, David Miliband, resigned from his post due to the manager’s “past political statements” while the Durham Miners' Association asked the club to return a symbolic banner. Di Canio would describe the furore surrounding his appointment as "ridiculous and pathetic".

Below we take at Di Canio’s volcanic six month stay on Wearside...

Part One: The Saviour

Sunderland sacked O’Neill following a rotten run of eight games without a win - their last victory dating back to mid-January - which left the club a point above the dreaded drop zone. Di Canio swiftly emerged as the boomakers’ favourite and was surprisingly installed as manager before the day was out. If the gamble was intended to galvanize the club, it worked.

In his first match at the helm, Di Canio’s Sunderland stunned Rafa Benitez’s Chelsea by taking a 1-0 lead just before the break, only to concede twice in the second-half. The visitors headed back North empty-handed, but the following weekend that disappointment was transformed into jubilation during the Tyne-Wear derby against Newcastle United.

Sunderland hadn’t beaten their fierce rivals at St. James' Park in 13 years. They were greeted at the stadium with a cauldron of hostility but over the course of the next 90 minutes Di Canio, who revelled in the highly-charged atmosphere, masterminded a stunning 3-0 win to move his side three points clear of the relegation zone with five games to go.

The performance of his rejuvenated troops was exceptional, yet it was Di Canio who stole the show on the touchline as he conjured up an animated and passionate performance. He reacted to each goal in ecstatic fashion. For the first he sprinted out of his technical area and punched the air and when his side doubled their lead he whipped out the now iconic knee-slide. He marked the third goal by joining in the touchline team huddle.

Sunderland followed that momentous victory with a 1-0 win over Everton in Di Canio’s first game at the Stadium of Light. However, Sunderland then unexpectedly slumped to a 6-1 defeat against Aston Villa, although two points from their remaining three games secured safety. Job done. 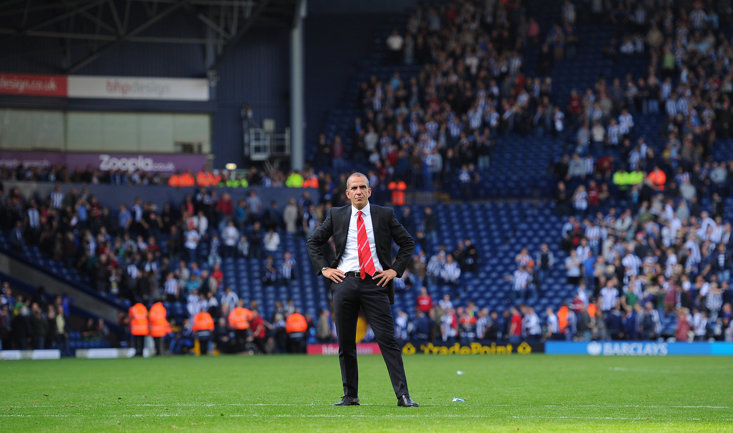 The Stadium of Light was a hive of activity that summer as Di Canio sold the likes of Simon Mignolet, Stéphane Sessègnon and James McClean. In came a gargantuan 14 players at a cost of £19m, including the likes of Cabral, David Moberg-Karlsson and El-Hadji Ba who managed just six games between them in all competitions. Meanwhile, Jozy Altidore would score only two goals in 52 games.

Di Canio would later state on Goals on Sunday that “not one of those (players) was brought by me”. A comment which was denied by the club’s then director of football Roberto De Fanti who said: "Paolo had the final decision on every player. He always blames everybody else but himself."

Either way, it proved to be an absolute catastrophe as Di Canio’s strict discipline and stubborn nature appeared to have a negative effect as his new look side miserably failed to gel.

"If someone comes inside with a mobile phone, even in the bag, I will take it and throw it away in the North Sea," said Di Canio, via The Guardian.

"It's a complete revolution. Even coffee before a game or training can be a problem. You can have coffee but three or four hours before. Coffee can reflect into your mood, your perception of the training. Have coffee when you get up, at breakfast, not before going out."

Even singing was taboo and jokes were forbidden before games. The “revolution” backfired as Sunderland mustered a single point from their opening five league games of the 2013/14 season.

During a loss to Arsenal, Di Canio was sent to the stands for contesting a goal that was ruled out, however it was the 3-0 defeat away to the Baggies which proved costly.

When Di Canio went over to applaud the travelling Sunderland supporters - he seemed to also want to share his agony - he was greeted with a wall of fury and frustration.

Two days later he was sacked, as reports emerged of “a player rebellion of unprecedented scale in this country” - The Telegraph - during an inquest to the defeat, which six years later remains Di Canio’s last match in management.