Two years on from being awarded Test status, Ireland head to Lord’s for a historic first meeting with England that has been a decade in the making.

William Porterfield’s side are hunting their first victory in the format, admittedly with the odds heavily stacked against them, following defeats to Pakistan and Afghanistan.

The prospect of regular Tests at Malahide still seems a distant one, but this is an outfit who are prepared to be patient.

After all, gaining Test status in the first place was an operation that began in earnest 13 years ago and which was only realised in 2017, thanks in huge part to the work of Cricket Ireland’s chief executive Warren Deutrom.

There would be no victory more symbolic, or which would speak of the game’s rise in Ireland, than one over an England side still riding the wave of their World Cup triumph.

Social attitudes towards the sport are changing. Cricket will never tap into the cultural conscience in the way that GAA can, but it has the potential to return to the levels of popularity it enjoyed a century and a half ago.

The history of cricket in Ireland has been a complex and, at times tragic, one. In the summer of 1921, as the War of Independence came to its conclusion, a spectator was shot dead at a match between the ‘Gentlemen of Ireland’ and the ‘Military of Ireland’ at Trinity College, allegedly by an IRA gunman.

And now, almost a century on, to Lord’s.

Cricket Ireland
@Irelandcricket
The walk our players will take tomorrow when they grace the @HomeOfCricket outfield!
#BackingGreen ☘️
3
29

For England, it is not merely a token affair, but a final warm-up for the Ashes, especially for those who weren’t involved in the World Cup.

James Anderson is facing a race against time to be fit, but it is at least looking promising for him to play a part against Australia at Edgbaston on August 1.

The two countries’ fortunes couldn’t have been starker in recent weeks. On the same day as England’s tantalising win over New Zealand, Ireland were suffering a comprehensive eight-wicket T20 defeat to Zimbabwe - hardly in their finest moment as a cricketing nation themselves, being suspended by the ICC just days later.

Yet the victory which England are expected to march to over four days between Wednesday and Saturday is not quite as clear-cut as it may appear. If the unthinkable were to happen, it would certainly surpass that famous record-breaking run-chase at the 2011 World Cup, Ireland’s greatest feat to date.

At the very least, whatever happens in the coming days, they can rest safe in the knowledge that there is a bright future to which they can look ahead.

Over the course of several years, serious time and energy has been invested across the four provinces – with Cricket Leinster deserving a special mention – into developing this current ‘Golden Generation’.

They are determined that future Irish players do not follow in the footsteps of Eoin Morgan and switch allegiances in search of Test cricket.

Several of that generation are now in the latter parts of their careers. Porterfield is 34, Kevin O’Brien is 35, while Boyd Rankin is the same age. Rankin, incidentally, has played Test cricket before, featuring in England’s Ashes series of 2013/14.

Yet there is life to come in the current set-up, batsmen like Andy Balbirnie and Paul Stirling continuing to impress.

Stirling too, like team-mate Tim Murtagh, is well-used to playing at the Home of Cricket, found in the Middlesex ranks in the County Championship season.

Porterfield stresses that his side are there to perform, not simply to enjoy the occasion – but it will be impossible - and more than that, it would not be right - for them not to indulge when his XI step out at Lord’s for the first time.

Irish cricket has never been in a better position. 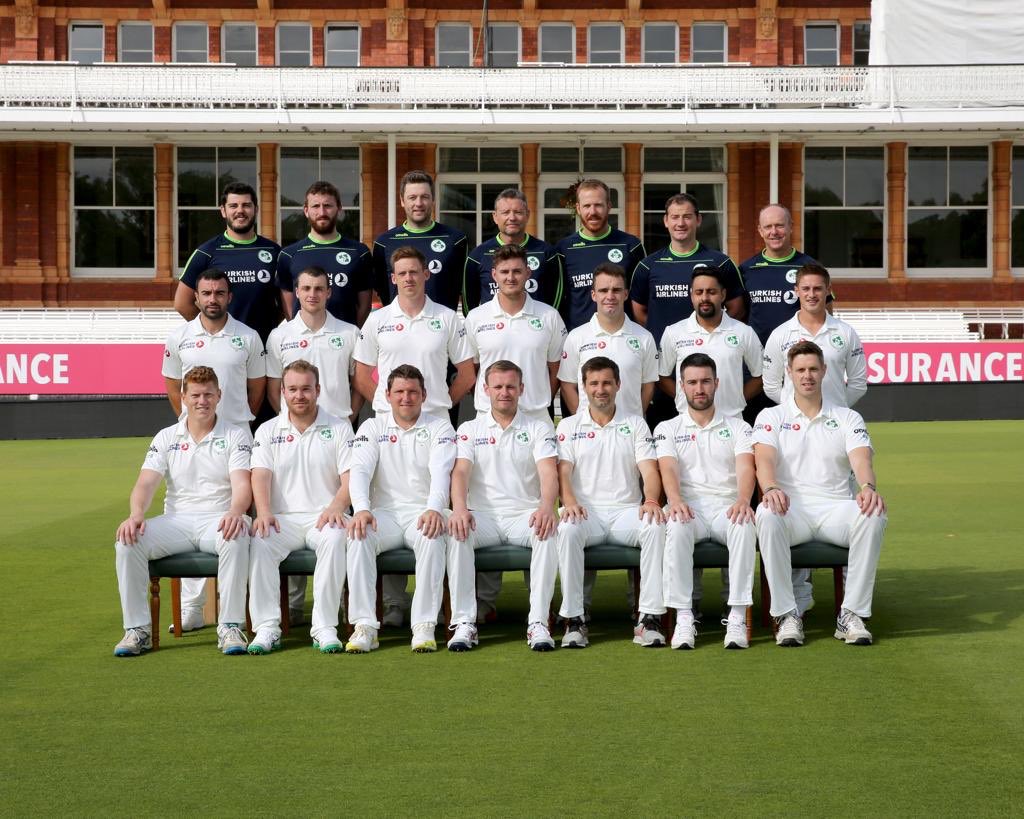 71
860
x
Suggested Searches:
Tyson Fury
Manchester United
Marcus Rashford
Lewis Hamilton
F1
Air Jordan
More
cricket
Brittle England Beaten Inside Two Days As India Survive The...
It was one of the most chaotic days of Test cricket ever but by shortly after tea on day two in Ahmedabad [ ... ]
cricket
Sidebottom Wants To See Both Broad And Anderson Play Third Test...
Former England bowler Ryan Sidebottom says England ought to select both Stuart Broad and Jimmy Anderson [ ... ]
cricket
The Hundred Can Help Revolutionise Women’s Cricket And Inspire...
The long-awaited The Hundred competition is set to revolutionise cricket and will finally kick off this [ ... ]
cricket
Should Test Cricket Lose The Toss After India's Battering Of...
England have nobody to blame but themselves for the manner of their 317-run mauling at the hands of [ ... ]
cricket
Sidebottom Hails ''Fantastic'' Root And ''Stunning'' Anderson...
Ryan Sidebottom has heaped praise on both Jimmy Anderson and captain Joe Root following England’s [ ... ]
cricket
Fantastic Jimmy Anderson Wraps Up A Statement England Win In...
England wrapped up a dominant First Test win over India on Tuesday, with Jimmy Anderson collecting three [ ... ]
cricket
100 Up! Joe Root's Timely Form Could Be The Difference For England...
He is the baby-faced batsman who slotted into England’s line-up in India in 2012-13 and immediately [ ... ]
cricket
Tailenders Is The Easy-Listening Pod That Takes An Alternative...
At the moment, we’re all enamoured with cricket, thanks to India digging in and out-saucing the [ ... ]
cricket
The New Book Shining A Light On The Biggest Scandal In Cricket...
It has been nine years since the News of the World ceased publication. Nine years. Doesn’t time [ ... ]
cricket
How Botham And England Revived The Spirits Of A Nation At The...
In the summer of 1981 a combination of spiralling unemployment and racial tension had led to riots in [ ... ]
cricket
Ben Stokes Inspires England Victory In Five-Day Test Classic
This was five-day test match cricket at its finest. Ben Stokes took the final three wickets on Tuesday [ ... ]
cricket
Batting Legend Tendulkar Warns ICC Five-Day Tests ''Should Not...
If you’re looking for a cricket batting record, odds on Sachin Tendulkar probably owns it. The [ ... ]
cricket
England Head To South Africa Test In Search Of Answers And A...
England end a historic 2019 by taking on South Africa in the First Test in Centurion this week. But [ ... ]
cricket
England World Cup Winner Moeen Ali's Conscious Uncoupling From...
“I just want to get that buzz back”. England’s Moeen Ali has continued to put [ ... ]
cricket
England Fail To Win A Test Series In A Calendar Year For First...
England have lost another Test series in 2019, which brings to a close a difficult 12 months that has [ ... ]
cricket
Joe Root Double Century Gives England A Glimmer Of Hope Against...
Joe Root hit a stunning double century to give England a slight hope of victory against New Zealand [ ... ]
cricket
Pope Steps Up After Baffling Selection Leaves England Short...
It is ever difficult to predict exactly what will unfold when England go on tour. Ollie Pope, a man [ ... ]
cricket
Book Review - Ben Stokes: On Fire
Like rugby, cricket fancies itself as a bit of a proving ground for leadership and performance techniques, [ ... ]
cricket
Ben Stokes Throws His Weight Behind ''England's Best'' Joe Root
Ben Stokes has leapt to the defence of under-fire England Test captain Joe Root following the heavy [ ... ]
cricket
The Time Has Come For Joe Root To Step Down As Captain And Focus...
Joe Root loves a soft dismissal these days.  Should England decide to move him aside as captain [ ... ]
cricket
Steve Smith's Welsh Fire To Face Oval Invincibles In First Game...
Steve Smith and Jonny Bairstow will clash with Jason Roy and Sam Curran in the world’s first-ever [ ... ]
cricket
England's 'New Era' Gets Off To Worst Possible Start Against...
England's 'new era' under Chris Silverwood got off to a humiliating start with a huge innings [ ... ]
cricket
Why England's T20 Triumph Over New Zealand Matters More Than...
There could not have been a more fitting antidote to the slightly subdued atmosphere surrounding England’s [ ... ]
cricket
Silverwood Over Kirsten Is The Right Choice For England's New...
England have confirmed the appointment of Chris Silverwood as their new head coach to Trevor Bayliss, [ ... ]
cricket
Why Ashes Win For Australia Could Be A Good Thing In Long Term...
It might well have been a headline from 2019. That famous obituary we all know so well, written [ ... ]
cricket
Five Things That Prove Steve Smith Ain't Perfect
Steve Smith. The best batsman in the world and seemingly impossible to get out from an English point [ ... ]
cricket
Manchester In The Rain: Five Things To Do When The Ashes Is...
Ah, Manchester. The proud home of The Sportsman is known throughout the world for its music, sport and [ ... ]
cricket
Ashes Hero Ben Stokes Must Be Considered Test Cricket's Best...
With every switch-hit, Ben Stokes eclipsed Botham of ’81. In the process, the third Ashes Test [ ... ]
cricket
England’s Lion Heart Jack Leach Is Granted Free Glasses For...
Specsavers have made good on Ben Stokes’ request to grant Jack Leach free glasses for life after [ ... ]
cricket
The Ashes: Why Staging A Test Is Vital To County Hosts
In the run-up to the Ashes, the talk has been about pitches. To be precise, it’s been about poor [ ... ]