As Euro 2020 enters its final qualification stages, you would be forgiven for losing track of the maths of it all.

Play off permutations, mixed with UEFA Euro Nations League standings, are enough to give even the most numerically-inclined a headache.

With the majority of the powerhouse nations already qualified, and with few genuine surprises expected, attention turns to the lesser lights, ahead of the final hurdle.

And with a few loose ends left to tie up, one nation’s path looks clear - Markku Kanerva’s Finland.

The Finnish need just two points from two games – against Liechtenstein and Greece - to make certain of their first-ever appearance at an international tournament.

Kanerva’s side making it through to Euro 2020 would not only be groundbreaking for Finland, they would also break their curious footballing record, of being the most northernly FIFA recognised nation never to qualify.

However, their rise to the brink of Euro 2020, is not built on mad facts, and Google searches about Lapland, it is based on a dedicated strategy headed up by Kanerva.

The 55-year old is a household name in Finnish domestic football, racking up over 50 international caps and winning five league titles with HJK Helsinki.

His appointment FA was based around a change in mentality, mirroring that of their Scandinavian neighbours.

Sweden’s approach in the post-Zlatan era has been to focus on the team, rather than the individual, and their friends to the near east have taken heed.

Hans Backe’s reign in 2016 brought about the worst run in the history of the national team, as they failed to win any of his 13 games in charge.

That forced a move away from the old methods, and a drive to promote from within. 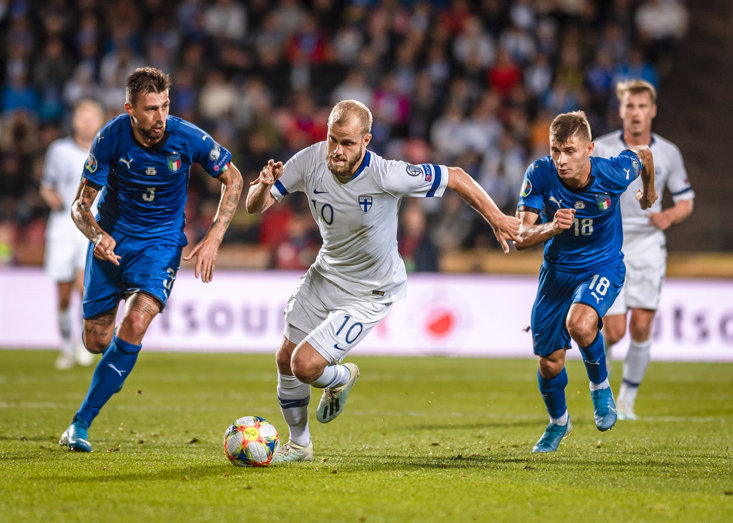 Kanerva had twice served as interim senior manager, in 2011 and 2015, alongside his role as U21 boss.

But a combination of wanting a more high profile manager, and Kanerva’s desire to remain with the underage set up, meant he was overlooked prior to 2016.

Qualification for the 2018 World Cup was essentially over before he started, but the positive shoots were there for all to see, as they ended the campaign with eight points from four games.

Kanerva insisted they took the Nations League seriously, and Finland topped their group with four wins from six.

The buzz was back, as Kanerva looked to utilise players he had worked with at underage level, including Rangers midfielder Glen Kamara and FC Augsburg schemer Fredrik Jensen.

However despite the familiarity of a group of players playing together on a regular, Kanerva still needed a spark.

Teemu Pukki needs little introduction to Premier League fans, but his elevation arguably has as much to do with Kanerva, as it does with Daniel Farke.

Pukki had lost his way under Backe, despite being prolific enough at Brondby to persuade Norwich City to make a move for him at the start of the 2018-19 campaign.

His deadly Championship form was matched by his newfound confidence for Finland, as Kanerva found the goals his system needed.

Three consecutive winning goals from Pukki in the Nations League set the platform for their success in the competition.

Finland’s purple patch in Euro 2020 qualification, with four back to back wins, saw Pukki return to the fore, with four goals in four games, including winners against Bosnia and Greece.

Kanerva will be preaching about a steady hand on the wheel in the final games, but the goals of Pukki make it difficult to keep Finland’s rise under wraps.

How far they can go remains to be seen, but his policy of defensive solidity, partnered with the promise of Kamara and Jensen, and the efficiency of Pukki, has given Kanerva a winning formula so far.