Football
News
A Statistical Analysis Of Every Type Of Object That Could Conceivably Be Used For Childhood Games Of Football
Adam Hurrey
12:34, 13 Dec 2017

“The ball is round”, the famous German coach Sepp Herberger once said. He had obviously not experienced a sponge ball after the Easter holidays, nor had to fashion something playable out of an empty Pepsi Max can.

We should have total respect for the resourcefulness of our nation’s schoolchildren when it comes to getting a game of football on in the face of rules, the weather and the premium real-estate of the playground needed to accommodate two goalframes. But, like old Sepp, we know that the most important thing of all is the ball: and, at the lowest rung of the football pyramid, that can come in many forms.

The truest symbol of health-and-safety paranoia. Traditionally, it has taken just two or three playground incidents of leather-ball-to-unsuspecting-nearby-face to ensure a ban on all footballs except for The Sponge.

“George Best and all the football stars wouldn't have got where they are if they were kicking sponge around,” railed the Child Growth Foundation in 2011, in response to a Gloucestershire junior school banning all but sponge balls in the playground. “They kicked footballs in the backyard and if they fell over and scarred themselves it was part of the learning curve.”

Football As A Kid
@footballaskid
The pure strike you could get on a fresh sponge ball at primary school..... http://t.co/Cop8V4hcsV

Protest was often useless, though, so it was better to try and embrace the sponginess. For a start, nobody can ever remember where the sponge ball was actually sourced: the PE cupboard perhaps, or the roof of the nearest school hut, but surely never actually, deliberately purchased by anyone for the purpose of bringing it to school.

The sponge ball is the perfect place to start with our statistical analysis, though, for it represents a fascinating cross-section of the main considerations in the childhood football experience. 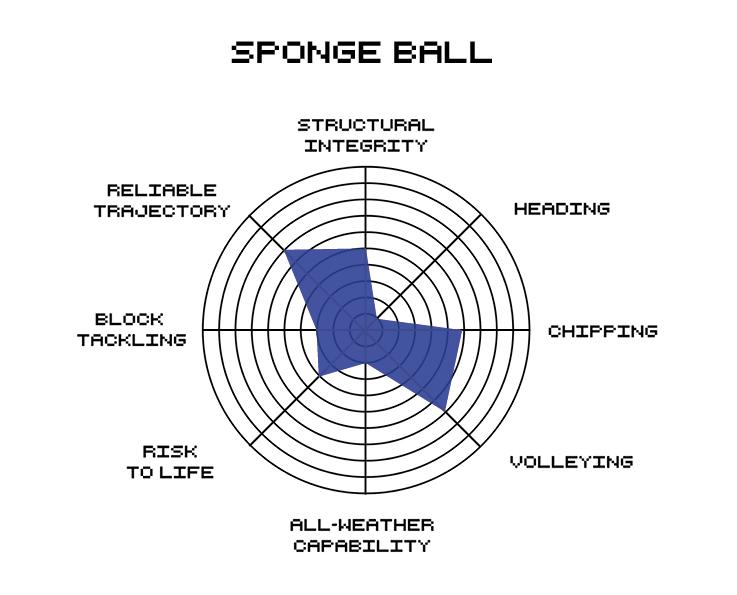 Given the mysterious origins of every sponge ball ever used in a playground, you were fortunate if you ever got to play with a fresh, new one: with a thin sheen to it that kept the sponginess vaguely intact. Soon enough though, you would find yourself hoofing about a sponge version of the Death Star - in its various stages of destruction - which oddly didn’t impact too much on the overall experience. In fact, the sheer concentration it required to make a sponge ball go where you wanted meant that it became an underrated method of developing one’s finer football motor skills.

Elements of the game that relied on a solid connection (heading and, to an extent, volleying) did not flourish with the sponge ball, unless it had been dunked in an autumnal puddle to give it some reassuring weight (which, in turn, undermined the sponge ball in every other department). The further downside to that - and the only reason it registers a 4 for its “Risk to Life” - is that a saturated, stinking sponge ball gently embedding itself into every contour of your face remains one of the most unpleasant sensations.

In summary, then: an erratic and elusive beast, but a fondly-remembered one.

Socks rolled into a ball

A firmly indoor-only option, but a potential classic in extremis. The crucial aspect to the socks-into-ball transformation was in the craftmanship: thick football socks were the ideal base material, tucked in on themselves with such efficiency that, for a few glorious minutes at least, you had an ideal living-room football.

Let’s look at the evidence. 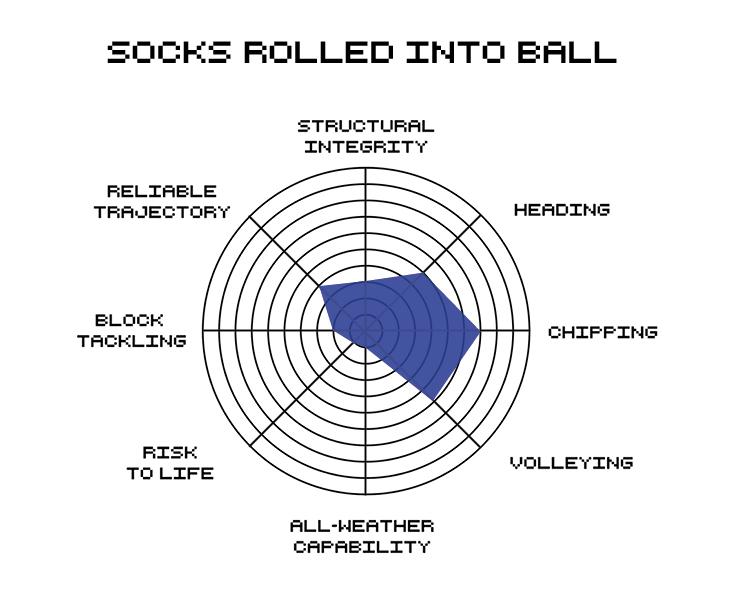 The sock-ball’s initial structural integrity was heavily undermined by having to repair it every two minutes or so. At its taut best, it was a solid performer in the heading/chipping/volleying stakes, but taking it outside anywhere in the Great British climate was madness.

Risk to life was minimal, apart from the occasional stubbed toe while engaging in a block tackle - the single most dangerous part of playing football in your living room. Although the average house carpet is, by definition, the perfect playing surface, you could never rely on a disintegrating sock-ball to travel in a straight line when sidefooting home. Strictly a power-over-placement affair.

Once again, one of those balls that almost everyone had, but can never remember where they got it.

Darren Richman
@darrenrichman
Nothing brings back a World Cup like this, a mainstay for indoor football in our house for a decade 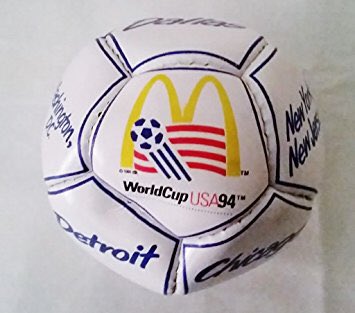 Often available in some sort of commercial World Cup tie-in with McDonalds or Coca-Cola, the foam-filled mini ball is unquestionably the official matchball of the Football in the Living Room When Mum & Dad Have Gone Shopping or Something (FITLRWMADHGSOS) World Cup. 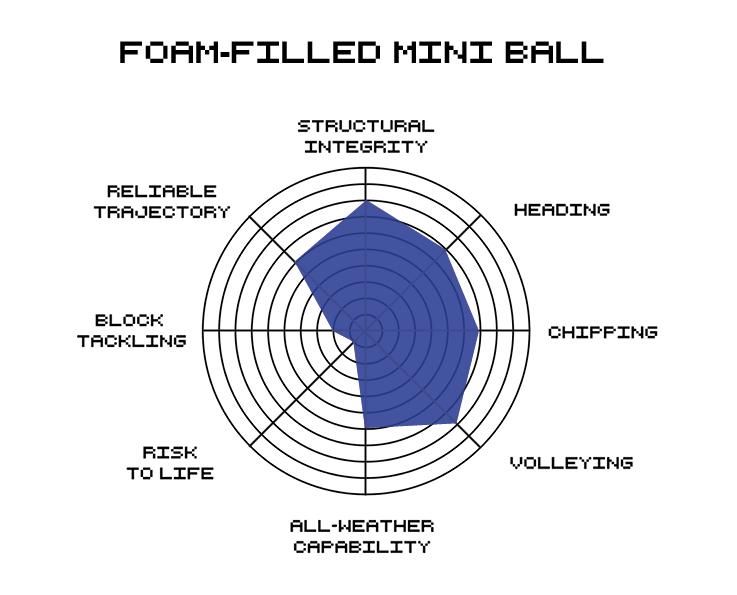 Structurally, it was a sure thing for a good couple of months until the stitching came apart. Until then, modest acts of heading, chipping and volleying were all easily accommodated, which proved to be bad news for any nearby ornaments.

In the rich history of necessity/invention - fire, penicillin, the George Foreman Grill - whoever first carefully-but-firmly stamped on a drinks can to turn it into a vaguely kickable object should have a blue plaque outside their childhood home.

The ultimate evasion of the no-leather-football rule, and one to which authorities were slow to respond. If no spheres were available, someone would simply locate the nearest intact empty can (fishing from the bin, however, was considered to be ungentlemanly conduct) and get the kid with the biggest shoes to apply some decisive downward force. The result? A sort of post-apocalyptic hockey puck, perfectly designed to slide across playgrounds. 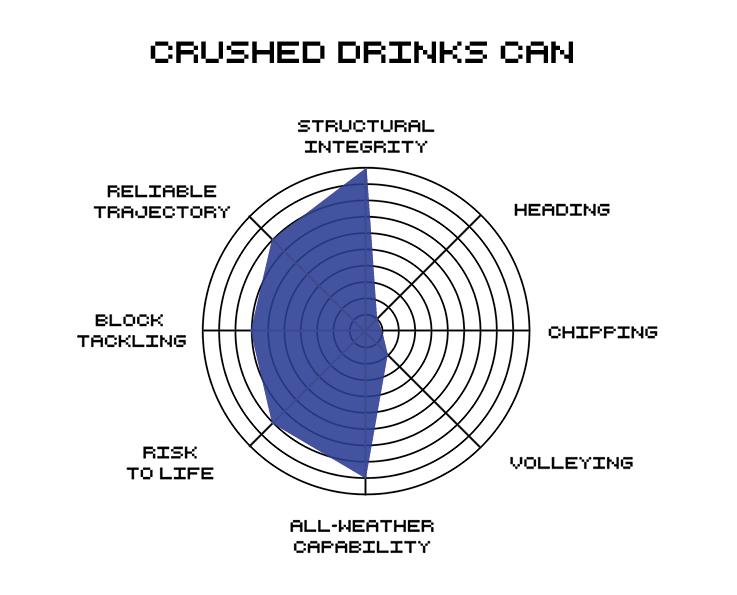 Virtually indestructible (only long-term corrosion was an issue, but the vending machines took care of that), the crushed drinks can excelled in some areas, but not in others.

It was a fine device for any early tika-taka enthusiasts or Thierry Henry-like sidefoot finishers, such was its accuracy across the surface, but rarely did it propel itself above ankle-height. After all, only a fool would try and head a piece of metal, let alone one that had developed razor-like edges after an hour of being scraped against tarmac.

Block tackles became a spectacle all on their own, the can easily withstanding the force of two simultaneous size-6 Kickers trying to force it towards one chain-link fence at either end. The king of stop-gaps, and deserves its place in any hall of fame.

A tricky grey area for the Playground Football Fun Police, a specialist branch of dinner lady whose main remit was to forcibly remove any contraband leather footballs. While clearly capable of causing minor blunt force trauma, the tennis ball proved hard to confiscate, so comfortably did it fit into the average schoolchild’s winter-coat pocket.

In technical terms, it remains a solid performer when needs must. 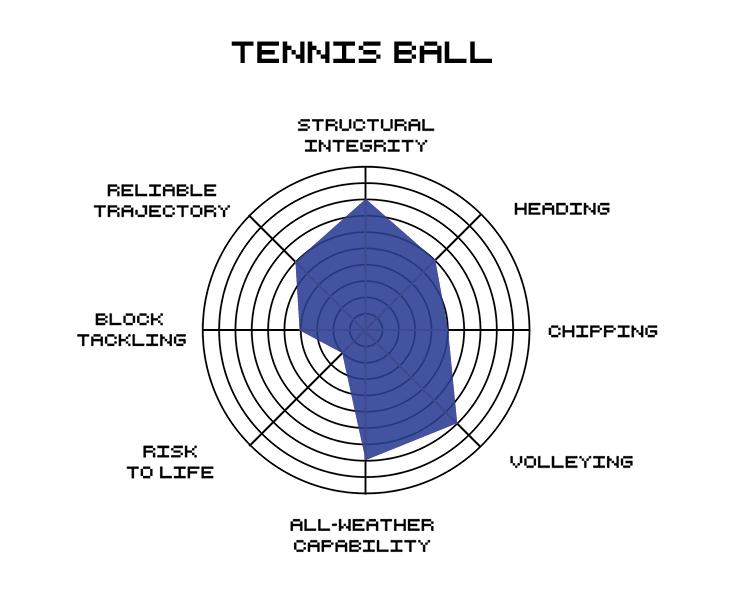 A tennis ball would last the best part of an entire term (and, in any case, was easily “procured” from PE lessons). Heading and volleying were both an accessible art, although chipping required you to perfect that stabbed forward motion of the foot, the sort that destroyed your school shoes well before Christmas.

It perhaps required too high a skill-level to control for the playground mass market but, on the other hand, the sight of a tennis ball lodged perfectly between the wires of a school fence is one of the icons of playground football.

Adam Hurrey
@FootballCliches
Idea for a programme: make a Pep Guardiola team play with a Mitre Mouldmaster for 90 minutes, on tarmac, with confusing netball markings and only a vague agreement about the height of the goals on the fences 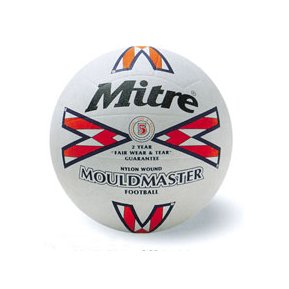 The Mitre Mouldmaster was designed by a sadist, and had virtually no endearing features: it bobbled around the playground with intent, remains one of the least enjoyable things to kick on planet Earth, and even made a sort of menacing, synthetic ringing sound as it bounced. 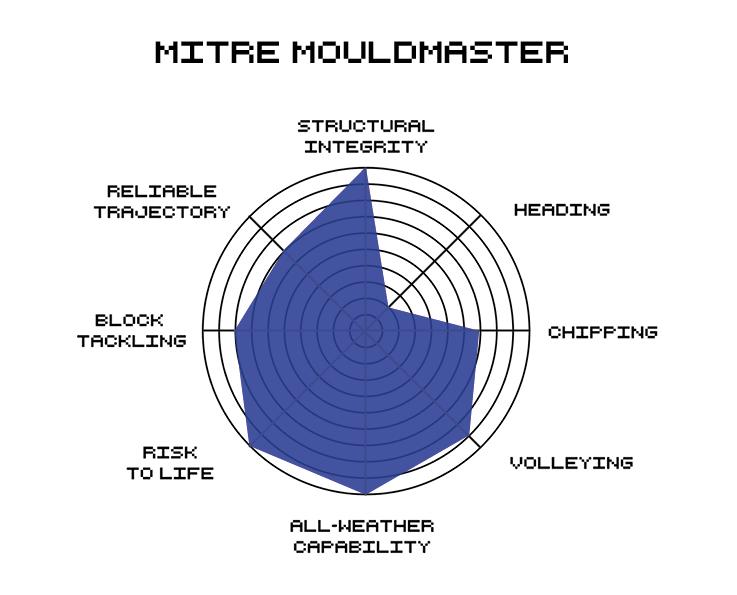 In terms of sheer ruggedness, it had no equal. Chipping it - in the classic sense - was inadvisable unless you weren’t a fan of toenails, although it was ideal for the occasional Poborsky Scoop. Volleying, too, was a reasonably fulfilling experience, until it ended up concussing a nearby Year 7.

Ownership of a Mouldmaster - even the name is devoid of any perceptible warmth - is now strictly controlled under the Offensive Weapons Act (1996). A cult classic, certainly, but a deadly one.

Everything the Mouldmaster wasn’t. A giver of joy, the ball with a thousand names (“SUPER TELE” and “SHOOT” the most notable quasi-brands) and the most gleefully ignorant trajectory of the lot.

Roker Report
@RokerReport
Settle an argument for me - penny floater or a fly away? 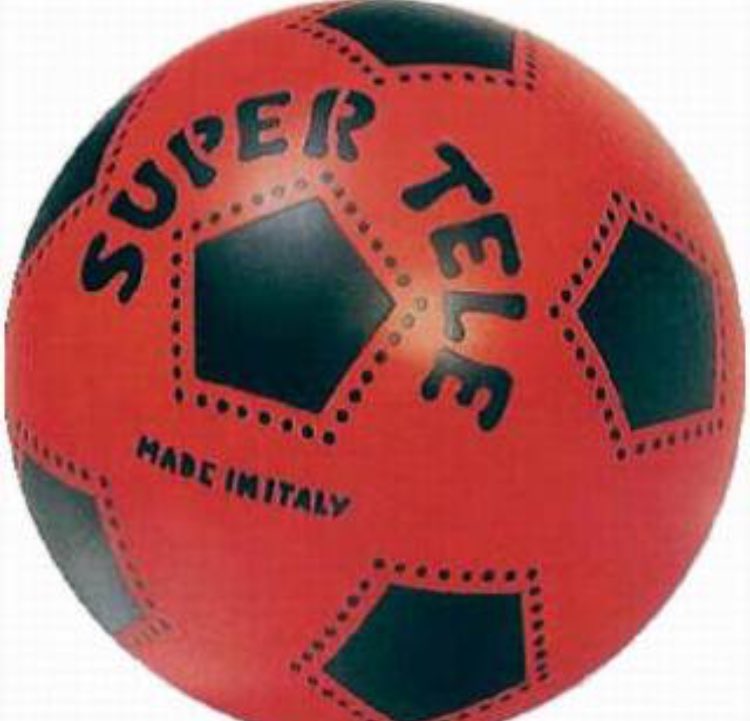 The penny floater (or “fly-away”, or whatever your part of the country called it) supposedly originates from Italy in the 1960s, and continues to wear its two biggest credentials proudly on its sleeve: cheapness and beltability. 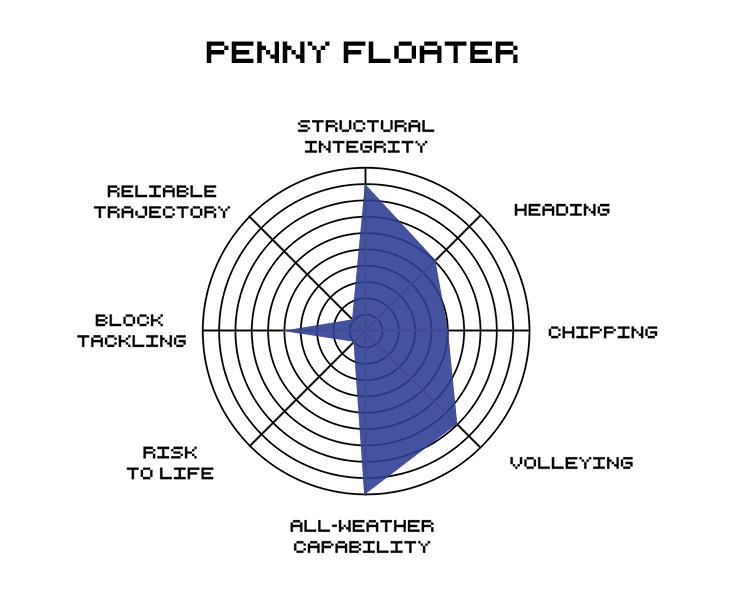 Reasonably durable, if only slightly heavier than a party balloon, the penny floater perhaps wasn’t designed for the captivity of a fenced playground. Windy days made it virtually unplayable - in the best way possible - while nobody has ever minded being smacked in the face by a penny floater; if anything, it’s a privilege.

Never mind that subtle one-touch football was impossible, never mind that more expansive play became a comical cartoon affair of speculative long-range efforts and sad trudges to go and fetch it from the Badlands beyond the playground fence.

And finally. Scientific rigour means it would be remiss of us to ignore the merits of an actual football. Being allowed to have a proper ball in the playground was a rare gift: perhaps you had a giant grass field to play on at school, or perhaps your school didn’t care (or have the resources to care) about the facial safety of non-participants during lunchtime football. 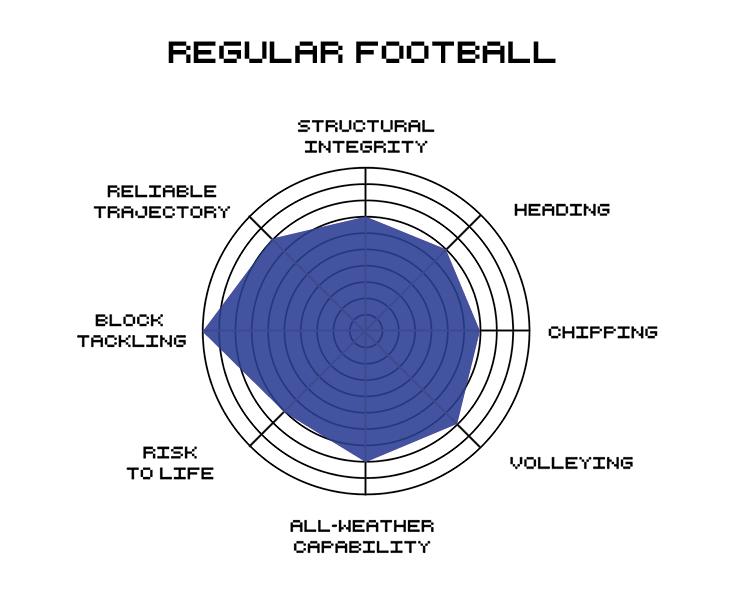 Sigh, obviously the regular football is a solid all-rounder, despite losing a couple of Structural Integrity points for when all the leather was eventually sandpapered off by the unforgiving tarmac; leaving a brandless, brown truncated icosahedron that could remove a layer of skin if approached from a certain angle.

Its inevitable confiscation - halfway through lunchtime, with the score tantalisingly poised at 12-10 - was perhaps no tragedy. Most of us got to hoof one around on a Sunday morning anyway, using some of the subtle skills we’d honed with a crushed can, hardened by the experience of taking a Mouldmaster to the thigh.