What lasting legacy would you like to see constructed in honour of your work? A statue? A plaque? A road sign? A toilet? No, definitely not a toilet. Nobody wants their lifetime’s efforts rewarded with a stinky toilet. Well, unless you’re Wrexham co-chairman Rob McElhenney and it’s all a fun joke, maybe…

But Byron Moreno is not Rob McElhenney. Byron Moreno is a retired referee from Ecuador who is so derided in Italy that a toilet block in the Sicilian seaside resort of Santa Teresa di Riva was named ‘Bagni Moreno’ (Moreno Toilets). It all came in light of his officiating in the Azzurri’s World Cup clash with co-hosts South Korea in a round of 16 match in Daejeon on June 18, 2002.

Having reached the final of Euro 2000, and come within seconds of beating France 1-0 only to be foiled by a Sylvain Wiltord equaliser in injury time and then David Trezeguet’s extra-time golden goal, Italy were considered to be among the favourites to win the World Cup in Korea and Japan, especially after Les Bleus’ humiliating group stage exit without scoring a goal.

While Giovanni Trapattoni’s side had stumbled through their Group G campaign, the draw appeared to have opened up for them when they were matched with South Korea in the first knockout game. The match would go down in infamy in Italy, though.

Within three minutes, Korea had a penalty. Song Chong-gug slung in a free-kick from the right and Christian Panucci headed away as Seol Ki-Hyeon fell to the ground immediately behind him. Good clearance? No, penalty, said Moreno.

When Gianluigi Buffon saved Ahn Jung-hwan’s effort from 12 yards and then Christian Vieri headed Italy in front, it appeared that normal service had resumed. But the sub-plot had already begun.

A Vieri leading arm on Kim Tae-young had gone unchecked yet a very similar incident saw Francesco Totti booked for his challenge on Kim Nam-il. I don’t care what I did before, said Moreno, that’s a yellow card offence now. 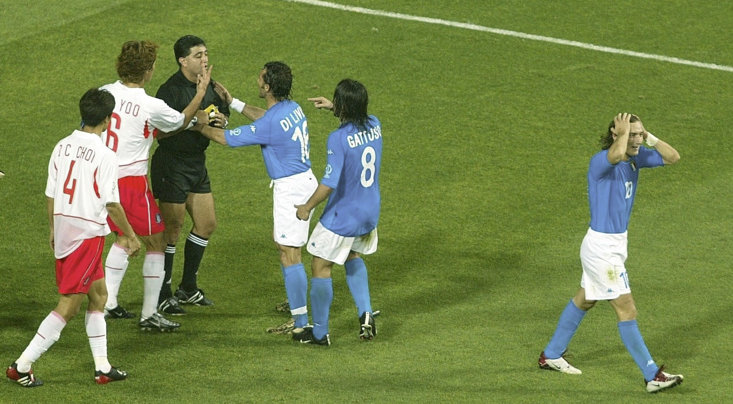 Then, after being held back by Alessandro Del Piero, Kim Tae-young retaliated by flinging an elbow into the Juventus forward’s upper chest in the penalty area, making a red card and a penalty seemingly inevitable. Nothing to see here, says Moreno, ticking off the players and swiftly moving on. Others would go unpenalised, from high stud-first challenges to body checks to shirt pulls with Italians on the attack.

Later, Lee Chun-soo would boot a prone Paolo Maldini in the head without the game being stopped, but Italy still led so it felt like the referee’s performance might end up a forgotten side-note as the Azzurri marched on to a quarter-final clash with Spain.

But Seol’s equaliser two minutes from the end of normal time took the game to golden goal, and Moreno’s officiating had suddenly become a bigger deal. And, in the first period of extra time, the defining moment happened when Italy thought they had a penalty.

Song’s clumsy challenge on Totti saw him take a little of the ball but a lot of the man. As Song reached to clear, both his left foot and his right knee took out the Italian’s trailing leg, sending Totti to the ground.

Song seemed banged to rights, but instead Moreno accused Totti of diving, produced a second yellow card and then a subsequent red. The Azzurri were furious, with Trapattoni making his ire known with both barrels to nearby Fifa officials.

There was still time for Damiano Tommasi to be flagged offside before tucking the ball home when he appeared to be at least level with the last man. But on 117 minutes, Ahn outjumped Paolo Maldini to head past Buffon and win the game for the home side. While the crowd went crazy, the Italians quickly tried to make sense of what had happened.

The collection of debatable calls that went against Italy that day have turned Moreno into the phantom baddy in any story of poor refereeing. His name is mud around the Bel Paese… or worse than that if you happen to use the Bagni Moreno in Santa Teresa di Riva.

South Korea would, of course, go on to beat Spain on penalties in the quarters after Fernando Morientes had had a goal from a Joaquin cross ruled out, with the referee’s assistant claiming the ball had crossed the bye-line before Joaquin had sent it into the centre. Replays showed that to be far from the case, with the Real Betis man well within the field of play.

That would only add further fuel to the Italian fire, as would Byron Moreno’s suspension a few months later for match-fixing in his native Ecuador following apparent ‘time-keeping errors’ in a domestic league game. By the summer of 2003 he had retired after a further suspension for unjustifiably sending off three players in one match.

In 2011 he served 26 months in prison after being caught smuggling six kilograms of heroin into New York’s JFK Airport by hiding it in his underwear. The news, predictably, went down with a mix of derision and bemusement in Italy. How had this man, Italians asked, been given the appointment of such an important football fixture?

Italy won the World Cup four years after that South Korea match, and plenty more water has gone under the bridge when it comes to low points in Italian World Cup history since then. But ask anyone in the country about Byron Moreno, even now – 20 years on, and you will learn all the Italian profanities you’ll ever need to know.