Football
News
After the harrowing events of their opener, the majority of Europe was pulling for the Danes
Conor Keane
21:59, 21 Jun 2021

Denmark overcame all the odds to qualify for the knockout stage of Euro 2020 by hammering Russia 4-1 on Monday in Copenhagen, sparking emotional scenes just nine days on from Christian Eriksen's harrowing cardiac arrest.

The great Danes inflicted a dramatic defeat on Russia and it was thoroughly deserved not only for their performance on the pitch but how they have acted off in response to the distressing scenes in their opening fixture of the tournament. It was truly football poetry in motion and there was a sense that the whole of Europe were standing shoulder to shoulder with Denmark in celebrating this astonishing victory as it was dedicated to Eriksen.

It is safe to say that there were more than just Danish supporters rooting for them to reach the Round of 16 following the way they reacted to Eriksen’s cardiac arrest against Finland. The Danish players were reportedly forced to play out the remaining 49 minutes of that fixture and they went on to lose the game 1-0. A lot was said about the Danes being at a huge disadvantage having been asked to carry on the game in the distressed mental state they were in after what had happened.

They looked to respond in their fixture against Belgium, in which they took the lead early on and looked sharp in attack but they were simply undone by a Kevin de Bruyne masterclass off the bench. While they performed well, they were left with it all to do in the final game as they had to win to achieve any chance of qualifying. From despair and tragedy to pure elation, football really is the beautiful game. 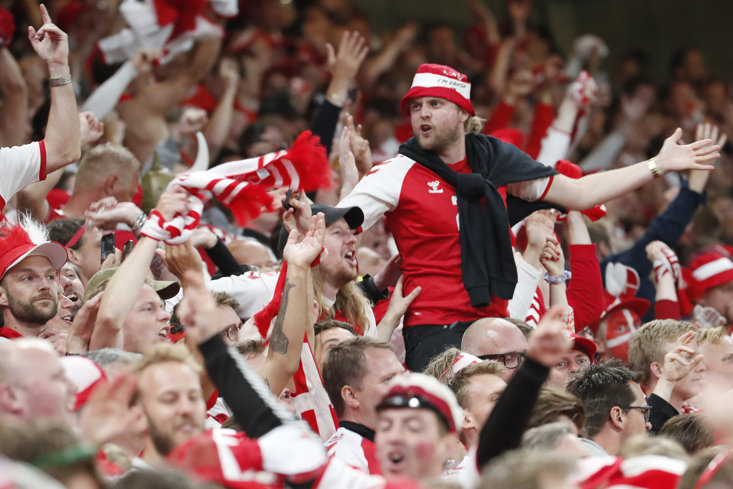 THE PARKEN GOES WILD DURING THE CRAZY SECOND HALF

Kasper Schmeichel was called into action to make the first save of the game to deny Aleksandr Golovin, who was able to easily break through the Danish defence and get a low shot on goal. Artem Dzyuba had a chance moments later as Russia gained more confidence with possession, his shot on the turn flying wide of the near post. Pierre-Emile Højbjerg came close to opening the scoring with a rifled from range that just went wide of the Russia goal.

Denmark took the lead through a brilliant curling strike from youngster Mikkel Damsgaard, who sent the Parken Stadion into a state of euphoria. Russia gifted Denmark a simple goal to extend their lead in the second half as a misplaced back-pass from Roman Zobnin gave Yussuf Poulsen the chance you dream of as a striker.

A Russia penalty looked to dampen the spirits of Copenhagen as Dzyuba converted from the spot with nerves suddenly evident in the Danish players. However, they immediately looked to push up the pitch in search of another goal to extend their lead and Chelsea centre-half Andreas Christensen fired in a powerful effort from range to send the stadium into pandemonium. Minutes later, Joakim Mæhle put the icing on the cake to wrap up the three points and book Denmark’s place in the round of 16 tie against Wales on Saturday.

This was footballing joy at its purist. What a contrast to nine days ago. What a story for Denmark.