Football
News
The Italians might have a key bargaining chip in a possible deal to bring the Frenchman back to Serie A
Rebecca Knight
17:01, 22 Feb 2020

Storm Dennis has been causing havoc up and down the country of late. Before that came Storm Ciara. Floods have been rife, trampolines blown on train lines and all manner of disruption has been caused. It’s been a nightmare for everyone. In fact, I’ve not seen that much chaos and disruption since Maurizio Sarri was at Chelsea.

The Italian swept in and repositioned N’Golo Kante, who was, of course, hailed as the best player in the world when it came to the defensive midfield role, and the best Chelsea had seen since the mercurial Claude Makelele. That didn’t matter to Sarri, who managed to turn the midfield upside down and ruin both Jorginho’s first season at the club and Kante’s season altogether. In fact, the Chelsea midfield have never truly recovered their balance, so it came as absolutely no shock whatsoever to see Sarri cast out not only Emre Can from Juventus but also do his best to get rid of Aaron Ramsey. Need chaos in your midfield? Call Mr M Sarri.

Juve snapped up Ramsey when his deal with Arsenal came to an end. Injury issues and not quite convincing Sarri have proven a real issue for Ramsey, and a transfer that looked as though it could be gold for both parties might now end up with a wad of cash for Juve and a crash course in Italian for Ramsey before he returns back to the UK.

In fact, Juve may well have struck gold here, with a key bargaining chip in a possible deal to bring Paul Pogba back to the club. The Italian giants know Pogba well, and want him to return as a marquee signing to take some of the pressure away from Cristiano Ronaldo in terms of goals and marketing - yet to get him from United, they will need not only cash but also a couple of players to send in the opposite direction.

Luckily for them, Ramsey could be perfect as a make-weight, and in fact, someone United might be better off having in all honesty. His attitude and work rate are second to none, and Ramsey always gives the impression of someone who genuinely wants to be on the field playing football. That’s not been the case with Paul Pogba in the last couple of seasons, and his desire to upgrade from Man United has been evident. 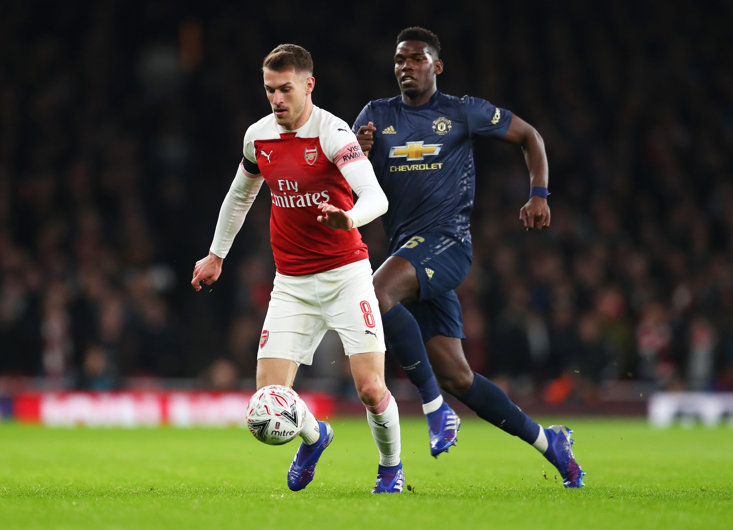 Given United will be lucky to get back into the Champions League and have a manager who attended Clown School before graduating to relegate Cardiff, that’s no shock, but while they don’t have anything bar cash to offer Pogba, Ramsey is a different story. They can offer him football week in, week out. He’d be able to play in the Premier League again, and for a club who despite their falling star, are still a huge attraction to players.

The way Ramsey plays would suit United. A possible partnership with Bruno Fernandes would make United fans excited, and the goal threat Ramsey provides would also be useful for the club. The fact Ramsey is so versatile he can play as anything from a number ten to a holding midfielder and plenty of positions in between would make him an attractive prospect for United and Ole Gunnar Solskjaer - assuming Frank Lampard’s Chelsea have kept him in the job by the summer of course.

You’d have to assume that along with Paul Pogba, other United players would be moved on this summer - including Nemanja Matic, who’s set to collect his free bus pass any day now and frankly should be ashamed to show his face after Jose Mourinho showed he could run twice as fast as him - and an adaptable Ramsey would be worth his weight in gold.

Dennis might have caused chaos, but this storm could be perfect for United, Pogba, Juve and Ramsey. It would allow Pogba and United to part ways, with neither party losing out, and Ramsey to return to England and to a side who are crying out for a player with his box to box dynamism. Of course, Storm Sarri would await Pogba in Turin, and if that goes badly, the levels of chaos could be far bigger than anything we’ve seen before.