Full-backs have for so long been considered the most unfashionable position on the football pitch. As Jamie Carragher put it so succinctly on Sky Sports: “Nobody grows up wanting to be a Gary Neville.” Underappreciated and often overlooked, right-back was the position the worst player was put in at Sunday League, while over at left-back the only left-footed player would slot in.

It seems for years that was just the way it was. Speedy wingers would often love coming up against their full-back as they were able to drift by them and whip a dangerous cross into the boss. Then that role developed so that the fashion was for wingers, ala Cristiano Ronaldo and Giovanni dos Santos, to cut inside and unleash an effort at goal. It has taken some time but finally, the full-backs are fighting back.

Manchester United have just splashed out £50m on Aaron Wan-Bissaka, something their cross-city rivals did two years earlier when they brought Kyle Walker to the Etihad Stadium. Walker’s move was part of a summer recruitment drive that saw Pep Guardiola bring in three new full-backs, to the tune of £125m. Since then, City have won back-to-back Premier League titles and Guardiola’s big spending in that position has paid off.

If the best manager in world football values full-backs that highly, then others should follow suit. Looking at the team that came closest to City last season, Liverpool, you can see the importance of the modern day full-back. Although they have not had to spend big on their pair - Andy Robertson was brought in for just £8m and Trent Alexander-Arnold came through their academy - they are amongst the elite players in that Liverpool squad.

They combined for 23 Premier League assists last term, and only Eden Hazard and Ryan Fraser bagged more assists than Trent Alexander-Arnold last season. They played so far up the pitch that they were more wingers than defenders and their attacking contribution to the team was far greater than their defensive output.

This seems to be a tactic that all of the top teams are attempting to employ, with varying success. It is now vital that a full-back is talented going forwards but can also get back and cover meaning that they are often the fittest players on the pitch. That is why Manchester United, after suffering years of Ashley Young at right-back, have spent big on Crystal Palace’s Wan-Bissaka this summer.

Comparing these new-age full-backs with their predecessors is almost impossible. Ashley Cole is still the finest left-back we have ever seen in the Premier League but even he was not as much of a threat going forward as Andy Robertson is. Gary Neville, Lee Dixon and Denis Irwin were all defensive specialists and incredibly difficult to beat but by no means an attacking threat or pass masters.

We saw some progression with the likes of Leighton Baines and Seamus Coleman at Everton, both of which can produce a wonderful delivery and get forward at any time but they were not putting up the sort of numbers we see nowadays.

Before, Kyle Walker’s move to City, it was incredibly rare to see a club spend even over £20m on a full-back, let alone around £50m. Nowadays, it is not uncommon for £50m to be spent on this position, such is its importance to the sport and tactical approach of most managers.

As you can see from the graph below, spending on full-backs has increased no end over recent years, even taking the inflated transfer prices into account. This trend looks set to continue over the next few years and just maybe, kids in the future will grow up wanting to be the next Gary Neville. 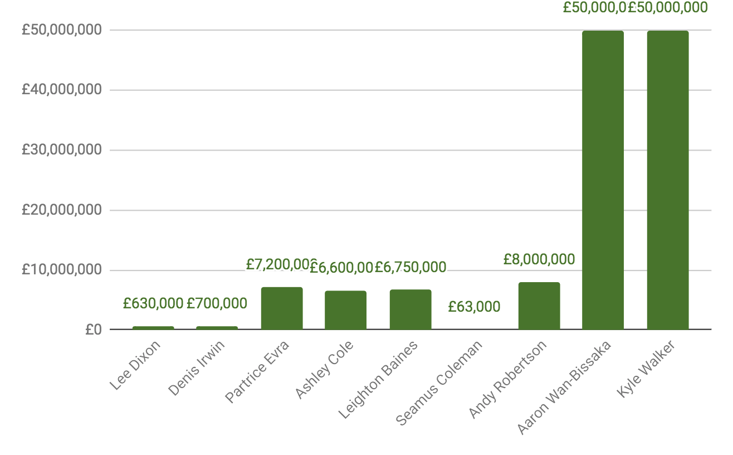