Football
News
The Rossoneri have been through all sorts since their last Scudetto win in 2011
Kris Voakes
07:55, 20 May 2022

To label Sunday’s trip to Sassuolo simply as AC Milan’s biggest game in 11 years would be to underestimate the trials and tribulations they have been through since their last Serie A title win back in the days of Zlatan Ibrahimovic, Andrea Pirlo, Pippo Inzaghi and Alexandre Pato.

There have been times in between that 2011 triumph and this most unbelievable of opportunities when Milan fans might have wondered how long they might have a club at all, let alone a Scudetto-winning one.

Two points ahead of neighbours Inter going into the final weekend, the Rossoneri need only draw with Sassuolo to end one of the darkest periods in the club’s history with a 19th Serie A title. And if Alessio Romagnoli holds the Scudetto aloft at the Mapei Stadium, there will be many travelling fans struggling to absorb the ups and downs since Massimo Ambrosini did the same trophy lift 11 years ago.

See, their last triumph came at a time when the club was beginning to realise the price of success. Under Silvio Berlusconi the Rossoneri had been phenomenally successful, winning eight league titles, five Champions Leagues and a host of other trophies since 1986, but it had cost them. Boy, had it cost them.

They’d spent years snapping up the likes of Ruud Gullit, Frank Rijkaard, Marco van Basten, Andriy Shevchenko, Clarence Seedorf, Christian Vieri and many, many, many… MANY more. But for as long as Milan were winning, Berlusconi looked like a god. And it paid to look like a god if you were constantly running for – or holding – political office. 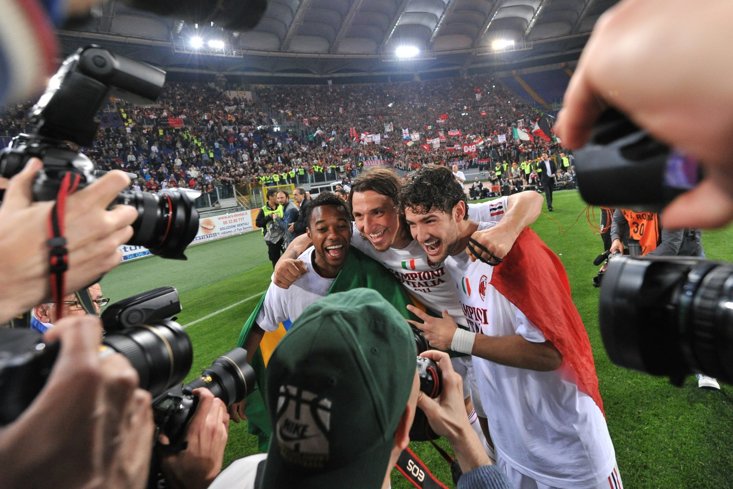 ROBINHO, IBRAHIMOVIC AND PATO WERE ALL MILAN STARS IN THE 2011 TITLE WIN

In the summer before their 2011 title, Berlusconi’s daughter Marina – the president of the family’s Fininvest company – had warned her famous father that no more handouts were available to spend on Milan, particularly in light of the new Financial Fair Play laws that Uefa had brought in to control flagrant spending.

Dad’s response had been to splash out on Ibrahimovic and Brazilian star Robinho as high-profile ‘gifts’, and while an 18th title followed, by 2012 it was clear that cuts had to be made. Ibra went to Paris Saint-Germain on a cut-price deal similar to the one which saw Thiago Silva go the same way, while Pato was flogged to Corinthians for just €15 million only a year on from being denied a €35m switch to PSG.

Berlusconi and his CEO Adriano Galliani no longer had bundles of cash to throw at the club, and the result was a gradual decline. As Milan slipped down the league and began to miss out on Champions League qualification more and more, the issues deepened.

The former Italian prime minister attempted to sell the club, first to Bee Taechaubol, a Thai businessman who was keen to keep Berlusconi on board as the club’s senior figure, but the main man didn’t want the stress anymore. He wanted to get a big fee back for his years of investment and get out of dodge.

So in 2017 he ended up selling to a group of Chinese financial brokers headed by Li Yonghong for €740m. The club, in turn, went back to Berlusconi’s prior model of spending big money, forking out over €170m for the likes of Leonardo Bonucci, Andre Silva, Hakan Calhanoglu and Lucas Biglia. But that only served to deepen their financial black hole, and the following year they were initially banned from entering the Europa League after falling foul of FFP, only to gain a reprieve through the Court of Arbitration for Sport.

It also turned out that Li and his consortium had bought the club with money borrowed at high interest rates from US hedge fund Elliott Management Corporation, and with money draining through their fingers and payback rates soaring, the owners soon found themselves scrambling around for buyers. Elliott ended up having to take the club off Li’s hands in 2018 simply in order to save the club.

Since the hedge fund took charge there has been a greater stability to the Rossoneri both on and off the pitch. There was smarter investment, and as a result prospects looked up for the playing side. Their second-place finish behind Inter last season saw them finally return to the Champions League for the first time in almost eight years.

And now they are one point away from completing the longest of long roads back.

This is not the most star-studded of Milan squads. Ibrahimovic is back but is in his 40s, and the rest of the regulars are under-rated players who have largely gone under the radar. But after decades of boom and, more pertinently, bust, this was exactly the kind of setup the Rossoneri needed.

One more point, and the whole sorry episode of sale, slump, default and dismay is over.