Football
News
The Toffees can thrive under the guidance of the Italian
Elliott Bretland
09:05, 08 Feb 2020

Everyone at Everton Football Club is smiling again. Grey skies shrouded Goodison Park for much of the 2010s as hope and optimism was extinguished season after season as manager after manager was shown the exit door. Now though, there is cause for real positivity thanks to Carlo Ancelotti.

A man of extreme pedigree, his knowledge, sereneness and calm has proved just the tonic. Everton are one of the form sides in the table with 14 points from Ancelotti’s first seven games in charge. With huge work to be done, performances have been far from perfect but he has got a tune out of the team to get results.

Last Saturday, at Watford, the Toffees came from behind to win a Premier League game for the first time in 776 days. The Italian has given his players belief and confidence. Merely playing for the former Milan, Real Madrid and Bayern Munich coach will make many of these Everton players feel a foot taller when they go out onto the pitch.

Ancelotti is the real deal when it comes to tactics and nous but it is his personality which is really shining through and aiding the Blues recovery. “We are getting better every day and working with this manager is brilliant,” defender Yerry Mina, who stole the show with two goals and some stunningly choreographed celebrations at Vicarage Road, told evertonfc.com.

“Carlo Ancelotti is a top manager and coach and a good friend. He is with the players all the time and always smiling. This is special because if you have any issues, you can tell Carlo. It is important that you can express yourself.

“Carlo is approachable and you can speak with him in his office to find solutions for anything. We are a good team and a family. We have to stay together to continue improving and achieving good results.”

It is that togetherness which has seen an upturn in results and a serious chance of European qualification come May. 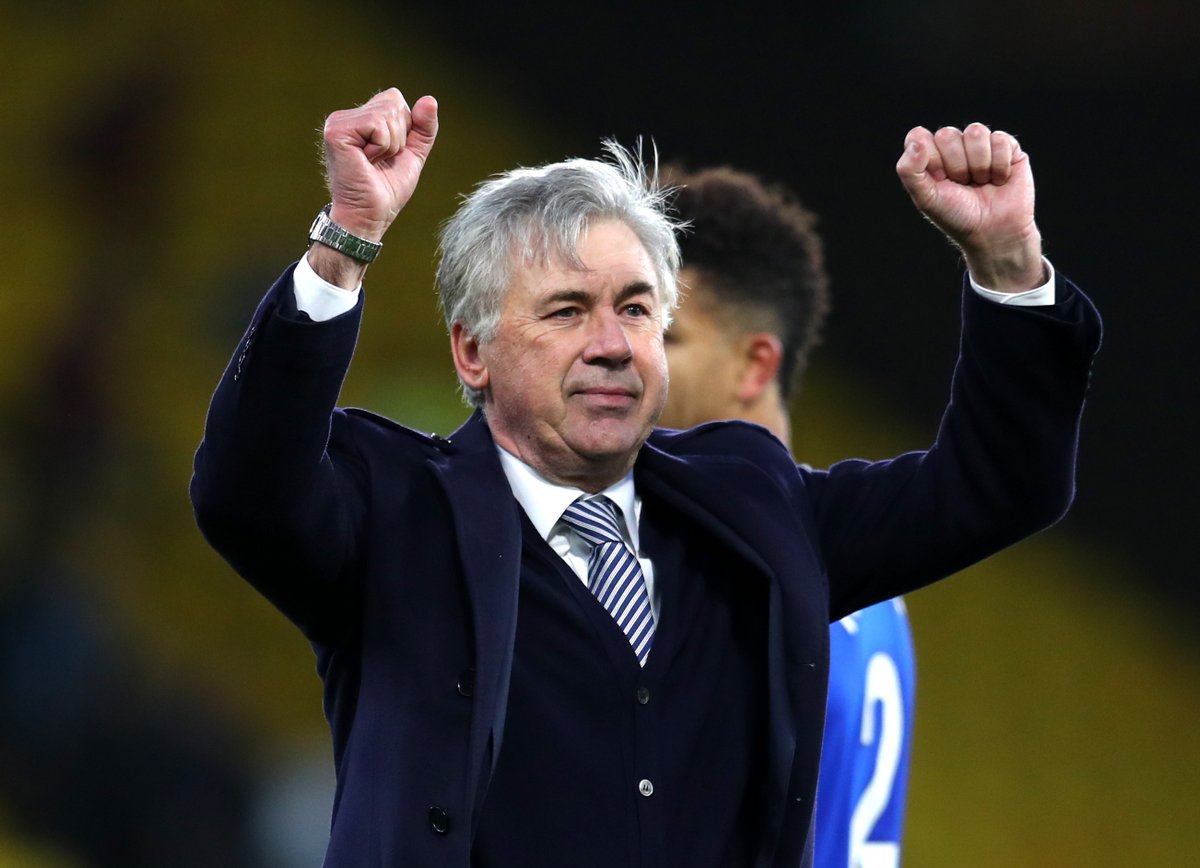 Playmaker Bernard, who has put in some stunning displays this year, recently spoke in equally glowing terms about the coach.

"I am really happy with my performances and that I have been able to help the team. Part of that [reason for his influence] is the freedom Carlo Ancelotti has given me to play,” the Brazilian told the Liverpool Echo. “Now it is a process of development and understanding what the coach wants from you, evolving and developing day-to-day.

"What the manager has asked from me is to look to find spaces between the defensive lines. I have been able to find this space, receive the ball and turn around and play it quickly. The freedom Carlo has given me is enabling me to find these spaces. And the process of learning under Carlo has been very quick because I played in that role previously.”

It seems even Ancelotti’s sense of humour has had a positive impact. Theo Walcott had not found the net all season but managed to get the winner at Watford. It was thanks to his new boss.

“Before the game, Carlo said to me, ‘Theo, you are allowed to score goals’,” the forward told the official Everton website. “It made me laugh and relaxed me. I told him I was waiting for his permission to score.”

Ancelotti will allow Everton to thrive.

Brotherhood of Blues. 💯
FULL 🎥:
126
1774
x
Suggested Searches:
Tyson Fury
Manchester United
Marcus Rashford
Lewis Hamilton
F1
Air Jordan
More
football
Ask The Fans: Why This Manchester Derby Means So Much To Both...
The Manchester Derby is upon us and once again the Etihad Stadium will be empty as coronavirus restrictions [ ... ]
football
Fulham Boss Scott Parker Is Bang On, VAR Is Killing Premier...
Imagine being back standing on the terraces. Your team’s striker is played through as the crowd [ ... ]
football
Chelsea Are On The Up, But Who Knows What's Next For Liverpool?
Chelsea’s 1-0 victory at Anfield on Thursday night provided plenty of answers for the [ ... ]
football
Son, Kane, Bale And Alli Show A Little Bit Of What Tottenham...
Tottenham were fortunate in the end but they needn’t have been. Boasting a supreme attacking trio [ ... ]
football
Betfred Paying Out Immediately On Manchester City Title-Winning...
Betfred founder Fred Done has announced he will pay out immediately on all bets which have Manchester [ ... ]
football
A Rangers Scottish Title Win Would Complete A Remarkable Decade...
On a bright October afternoon in 2012, Rangers were at their lowest league position in their 149 year [ ... ]
football
Ryan Sessegnon Quietly Shining For Hoffenheim In Germany As...
It’s May 20, 2000 and in north London, Chelsea captain Dennis Wise is lifting the FA Cup after [ ... ]
football
Selling Tammy Abraham Would Show Chelsea Haven't Changed Their...
Albert Einstein once stated that: “the definition of insanity is doing the same thing over and [ ... ]
football
Man United Performance Against Palace Gives Fans Cause For Concern...
Due to the thick fog that came in at Selhurst Park, it was a small struggle to see the second half all [ ... ]
football
Chelsea And Man City Emerge Victorious From Chaotic Night In...
Chelsea Women came through a dramatic Champions League first leg against Atletico Madrid, winning 2-0 [ ... ]
football
Emiliano Buendia Stars As Norwich City Take Giant Leap Towards...
Norwich City have gone ten points clear at the top of the Championship and have one foot in the Premier [ ... ]
football
Laporta Could Be Key To Lionel Messi Staying At Barcelona, Says...
Lionel Messi could well stay at Barcelona despite the deep crisis the Catalan giants currently find [ ... ]
football
Man City's Horror Start Makes Their 21-Game Win Streak All The...
A cruel deflection off Ruben Dias’ boot gave West Brom an equaliser at the Etihad Stadium and [ ... ]
football
Relegation A Very Real Possibility As Apathy Reigns At Newcastle...
St James’ Park reeks of complete and utter apathy right now. Newcastle United is just about existing, [ ... ]
football
Right Tournament, Wrong Time As UK And Ireland Target 2030 World...
“It’s coming home, it’s coming home, it’s coming…” The UK government [ ... ]
football
Ian St John Was A Liverpool Legend, Football Icon And Beloved...
Ian St John was a true Liverpool legend. The Scot moved to Anfield from Motherwell in 1961 and scored [ ... ]
football
Don't Worry About Wolves, If This Cycle Is Ending Another Won't...
It’s April 2018, and the Derby defence has dealt easily with the Wolves corner kick, powerfully [ ... ]
football
Ronaldo Scores But Juventus Stumble, This Weekend's European...
Another weekend of football on the continent, another weekend which saw Lionel Messi and Cristiano Ronaldo [ ... ]
football
Jose Mourinho's Distrust Of Gareth Bale Is Doing Tottenham No...
Gareth Bale scored two goals and set up another on Sunday, but just as Tottenham Hotspur fans were beginning [ ... ]
football
Sam Mewis Scores Twice As Man City Close In On WSL Leaders Chelsea
Sam Mewis netted twice on her return from injury as Manchester City closed the gap on leaders Chelsea [ ... ]
football
Liverpool Stop The Rot After Horror Run With One-Sided Win Over...
Liverpool are back. For now. Staring down the barrel of another night of frustration after four straight [ ... ]
football
Solskjaer's Search For A True No.9 Continues As Man Utd Draw...
Luke Shaw was marauding forward with the ball to get Manchester United on the attack again and cut inside, [ ... ]
football
Rooney Nets The Only Goal To Lead St Johnstone To Betfred Cup...
St Johnstone clinched only the second piece of major silverware in their history on Sunday with a 1-0 [ ... ]
football
Arsenal Show Character To Remind Premier League Of Their Quality
Character. Every top team has it. Every team with character can battle until the end. Setbacks, pitfalls, [ ... ]
football
With 200 Chelsea Apps In The Bag, Kante Can Shine Once Again...
Amid a whole host of storylines lined up for Chelsea v Manchester United, one person is sure to go under [ ... ]
football
Anwar El Ghazi Finally Gets Revenge At Elland Road As Aston...
Anwar El Ghazi got his revenge at Elland Road, the ground where he was controversially sent off on his [ ... ]
football
Brighton’s VAR Nightmare Vs West Brom Proves We Must Be Able...
Quick free-kick, whistle, goal, whistle, goal disallowed, goal given, players at half-way line, goal [ ... ]
football
Stones and Dias Prove 'Defence Wins Titles' As Man City Make...
“Attack wins you games, defence wins you titles.”  As Manchester City won their 20th [ ... ]
football
Callum Davidson Hoping To Lead ''My Club'' St Johnstone To Cup...
“It’s my club,” Callum Davidson says of St Johnstone, the team he will proudly lead [ ... ]
football
David Martindale’s Inspiring Journey Could See Fairytale Chapter...
David Martindale never dreamed he would be managing Livingston in the final of the Betfred Cup [ ... ]