Boxing
News
Benn is one of Britain’s most improved boxers but his biggest test lies ahead
Kieran Spratt
10:00, 21 Nov 2020

His father was ‘the Dark Destroyer’ a man who swept through the super-middleweight division like a tornado, tearing through nearly all that stood before him, with a primal and raw ferocity that made him one of the best and most beloved fighters to ever hail from these isles. These are some seriously big shoes to fill for Conor Benn.

Nigel’s shadow has loomed large over the early portion of his son’s career but the 24-year-old can step out of it and announce himself to the world on Saturday night when he takes on Germany’s Sebastian Formella at Wembley Arena - without question his toughest opponent to date. Benn has, thus far, accumulated an unblemished professional record of 16-0 (11), a solid start, but the younger Benn (his half-brother Harley Benn, also a pro, is four days older) has yet to set the world alight and that has allowed some criticism and doubt over his potential creep in.

There’s little question that Benn is one of, if not the, most improved fighter on the British boxing scene right now, and this week his promoter, Eddie Hearn, admitted his shock at Benn’s sudden improvement, “Benn has come from nowhere. I remember watching his debut thinking: 'Blimey!'”

“Poor kid was 19 and we slung him out in front of 20,000 people at The O2. He works so hard to make the improvements he has made. This is Benn's coming out fight. He can be a big star.” 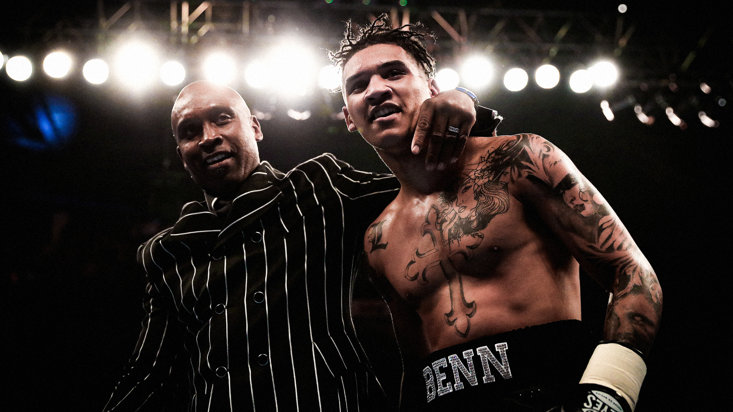 All the improvement in ability in the world won’t help if a fighter’s pinned down by an overwhelming weight of pressure bearing down on them though and the legacy that his father left could be the biggest obstacle for Benn to overcome in his career - even with a win against Formella, comparisons will likely still persist - perhaps we should wait and see what happens before we start putting undue pressure on him?

Consistent comparisons to a man who is stitched into the very fabric of British boxing lore and one of the toughest super-middleweights ever? It all seems pretty unfair.

The pressure seemed to spill over in a Sky Sports interview on Wednesday when Benn became teary talking about the sacrifices he made moving from Australia to the UK as a youngster to pursue a fighting career, and how it cost him crucial time with his family. It was something Hearn acknowledged, himself the son of a famous father, and says he knows what it’s like to try and make a name for yourself.

“Getting emotional before a fight, like that, is never a great sign and part of that could be to do with the pressure,” Hearn told SunSport.

“But people don’t realise that he left his home in Australia to come here on his own, as a kid, to try to make it as a fighter.

“I have had it myself where people think ‘you’ve got a famous and successful dad, it’s bloody easy for you’.

“Yes Conor did walk into a promotional deal with us but that brings with it huge pressure to create your own name.

“I think maybe we saw that a little bit in that video clip.”

His opponent this weekend, the Hamburg-born Formella, is one tough cookie, suffering his only career defeat in last fight and that was against a genuine welterweight elite in Shawn Porter, whom he admirably took the distance.

Should Benn win, which is far from a certainty, the future is most certainly bright but let’s leave the comparisons to his father in 2020. Conor is his own man.