It has been a long time coming for Jill Scott. 349 days to be exact since her 149th cap but finally today she will reach the quite frankly ridiculous 150. Scott has had to be extremely patient waiting for this moment, a game against Germany in October was cancelled after a positive Covid-19 test and another game, planned for December v Norway also had to be canned.

Today’s friendly international against Northern Ireland will finally bring that moment for a true England great. Only the great Fara Williams, who ended her career on 174 caps is above the 33-year-old, who is currently on-loan at Everton from Manchester City. But ‘Crouchy’ as she is nicknamed for her 5ft 11in frame, wasn’t always guaranteed to make it in football.

Due to her tall stature, she was an excellent long distance runner as a youngster and that endless energy is something she has carried into her footballing career. As a Sunderland youth player former England u19 manager Mo Marley took a chance on her and called her up to her squad due to her physical attributes, even though Scott admits herself she wasn’t the best technical player.

Her England career really kicked on when she was included as a bit of a wildcard in the 2007 World Cup squad. At just 20 years old, this was a high-pressure environment under coach Hope Powell but she thrived under the pressure. After putting in a good display from the bench after replacing England’s best ever player Kelly Smith in the opening game against Japan, she won a starting spot for the remainder of the tournament and even scored in the final group game v Argentina. The Lionesses lost in the quarter-finals to the USA but from there, Scott has barely left the starting XI. 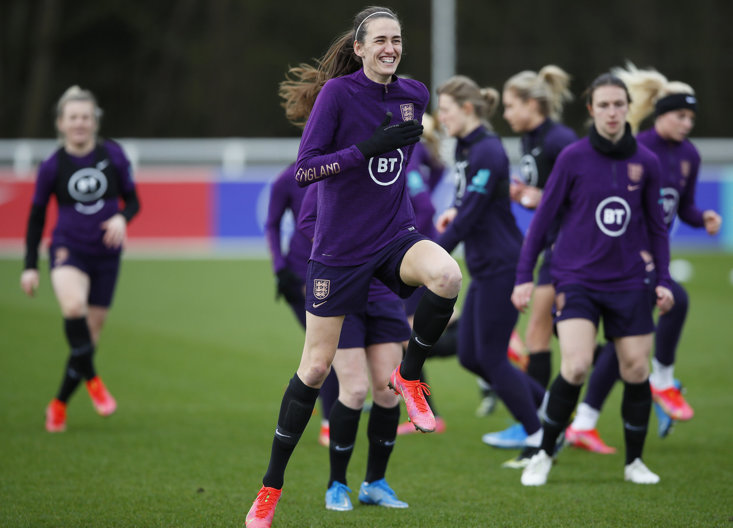 Ever present, Scott has starred at four World Cups in total and been a key cog as England have emerged as a true force on the world stage, finishing third in 2015 and fourth in 2019. Every single manager over the past 14 years, Hope Powell, Mark Sampson, Mo Marley and Phil Neville have seen what she can bring to the table and had to include her in the side.

Now she will have to prove herself to interim boss Hege Riise as she takes charge of her first game and incoming boss Sariga Wiemann who takes charge in September but given her past, this shouldn’t be an issue, even at 33 years old.

For all her skill, class and leadership skills, Scott is by no-means squeaky clean. Like every great footballer, she has an infectious personality and just makes others around her smile. Due to the lack of facilities in the 2000s, the Lionesses were sent to prisons to do gym work. A group in the north-east, spearheaded by Scott but also including Steph Houghton and Jordan Nobbs, used to go in twice a week to lift weights.

England’s physical performance coach Dawn Scott (no relation) said last year: “The trainer would meet them at the reception and lead them through the prison. Jill being Jill, full of energy, nothing malicious, would mess around and she got banned from going for a while.”

Although 2020 was tough for a lot of people and Scott has been made to wait for her 150th appearance, she did have a big reason to smile back in March as she got engaged to long-term partner Shelly Unitt. Scott may be on course to tie the knot at some point in the near future, but the Lionesses’ have been in love with her since 2006.

x
Suggested Searches:
Tyson Fury
Manchester United
Marcus Rashford
Lewis Hamilton
F1
Air Jordan
More
football
Anwar El Ghazi Finally Gets Revenge At Elland Road As Aston...
Anwar El Ghazi got his revenge at Elland Road, the ground where he was controversially sent off on his [ ... ]
football
Brighton’s VAR Nightmare Vs West Brom Proves We Must Be Able...
Quick free-kick, whistle, goal, whistle, goal disallowed, goal given, players at half-way line, goal [ ... ]
football
Stones and Dias Prove 'Defence Wins Titles' As Man City Make...
“Attack wins you games, defence wins you titles.”  As Manchester City won their 20th [ ... ]
football
Callum Davidson Hoping To Lead ''My Club'' St Johnstone To Cup...
“It’s my club,” Callum Davidson says of St Johnstone, the team he will proudly lead [ ... ]
football
David Martindale’s Inspiring Journey Could See Fairytale Chapter...
David Martindale never dreamed he would be managing Livingston in the final of the Betfred Cup [ ... ]
football
Rooney's Big Game Experience Could Pay Dividends For Rams In...
Since he burst onto the scene as a 16-year-old, scoring that goal against David Seaman in the Arsenal [ ... ]
football
Europa League Draw: Ibra Returns As Man United Draw AC Milan...
Manchester United’s quest for Europa League glory will pit them up against AC Milan in the last [ ... ]
football
Two Years On At Leicester, Rodgers' Decision To Leave Celtic...
The rumours swirled for a couple of weeks beforehand, but on this day two years ago, Brendan Rodgers [ ... ]
football
Leicester Can Learn From Slavia Prague Setback For Future Success...
In Greece hours earlier, Arsenal absolutely had to beat Benfica to keep their season alive. In Leicester, [ ... ]
football
Arsenal Keep Europa League Dream Alive With Huge Comeback Win...
Joe Willock, Reiss Nelson and Ainsley Maitland-Niles all started for Arsenal in the Europa League at [ ... ]
football
Appointing Lennon's Successor Will Be Celtic's Biggest Decision...
13, 9, 9, 30, 15, 27, 29, 16, 20,  This isn’t a tough ‘guess the missing number’ [ ... ]
football
Brentford Back On Track But Norwich Lead The Way In Thrilling...
Brentford returned to winning ways on Wednesday night but Norwich City remain seven points clear at [ ... ]
football
Five Years On: The Night Marcus Rashford Blasted His Name Into...
Marcus Rashford wasn’t even supposed to be playing on the night his life changed. Anthony Martial [ ... ]
football
Forget Talk Of The Quadruple, Manchester City Are A Team To...
Manchester City made it 19 wins in a row in all competitions with a comfortable 2-0 win over Borussia [ ... ]
football
Dele Alli Masterclass Proof He Can Get His Spurs And England...
Is there any way back for Dele Alli at Tottenham? After tonight’s performance in an emphatic 4-0 [ ... ]
football
Lennon's Departure An Inevitable Conclusion For Underperforming...
For nearly a decade now, Celtic have held the upper hand. They have been able to find fun in Rangers’ [ ... ]
football
Everything You Need To Know Ahead Of This Week's Europa League...
The Europa League returns on Thursday with British clubs looking to get the job done in the second leg. [ ... ]
football
Pep's Pursuit Of Perfection Could Yet Lead Man City To Even...
When Raheem Sterling headed home within the first two minutes on Sunday, the end result was already [ ... ]
football
Giroud Stunner Breaks Down Atletico's Wall To Put Chelsea In...
The ball seemed to hang in the air for an absolute age. For a good hour this game between Atletico Madrid [ ... ]
football
VAR Has Got A Lot Wrong, But It Is Dealing With Football's Problem...
The right decision was made. No penalty. Andre Marriner looked at his monitor and watched reply after [ ... ]
football
Simeone Is Everything Abramovich Wants At Chelsea, But He Doesn’t...
Diego Simeone and Chelsea have been inexplicably linked for the entirety of the past decade. Every time [ ... ]
football
From Bayern Target To Subbed Sub, Hudson-Odoi Needs To Become...
The board really did say the number 20. Callum Hudson-Odoi trudged off the field but surely must have [ ... ]
football
Everything You Need To Know Ahead Of This Week's Champions League...
We continue to live in strange times, and still some of the Champions League last 16 fixtures must be [ ... ]
football
Gerrard On The Verge Of Long-Awaited Title As Ruthless Rangers...
“Have you ever seen Gerrard win the league?” goes the mocking chant with a rather course [ ... ]
football
Real Madrid Close In On Atletico, This Weekend’s European Football...
It was an horrendous couple of days for some of Europe’s top clubs as their title bids were dented [ ... ]
football
With Management Made In Sweden, Potter And Hodgson Share A Similar...
Sweden; It's the home of IKEA, ABBA and also the starting base for young English managers starting [ ... ]
football
Daniel James Shows The Value Of Patience As Man Utd See Off...
It was February 2019 when Daniel James went viral playing for Swansea City. In February 2021, he was [ ... ]
football
Guardiola's Midfield Masterplan Adds Arsenal To The List Of...
It was 1974 and Holland hunted in packs. Like watching an under-10s game on a Sunday morning, every [ ... ]
football
Ibrahimovic Can Only Stand And Applaud As Lukaku And Inter Win...
This was a Milan derby which started with a mural being painted outside San Siro of Romelu Lukaku and [ ... ]
football
Eric Bailly Can Be The Much-Needed Player To Help Improve Man...
It feels like Manchester United are close. Close to having a starting XI that can seriously challenge [ ... ]