One day down, two to go.

The weather gods continue to smile down on those runners who like to hear their hooves rattle with no rain forecast so let us focus on day two at Aintree on Grand National Eve.

If Thursday wasn’t a successful day, it doesn’t get any easier as Friday starts with a difficult two and a half mile handicap hurdle to solve.

Wilde About Oscar has won four of his last five starts for the red-hot Skelton team, his only blip when pulling up in the G1 Challow Hurdle at Newbury over Christmas. He always looked like winning at Uttoxeter last time on handicap debut from another progressive rival in Mint Condition. He has leading claims, but it will not be easy to carry top weight to victory against 21 other rivals.

Amarillo Sky got off the mark under rules at Exeter last time and is respected for the Tizzards but SOLWARA ONE is the pick for Neil Mulholland under Robbie Dunne who is riding full of confidence lately. Solwara One is very lightly raced and makes his handicap debut this afternoon after three wins from four starts under rules. Last time out was a simple success at odds of 1/7f at Huntingdon and a mark of 134 looks quite favourable. 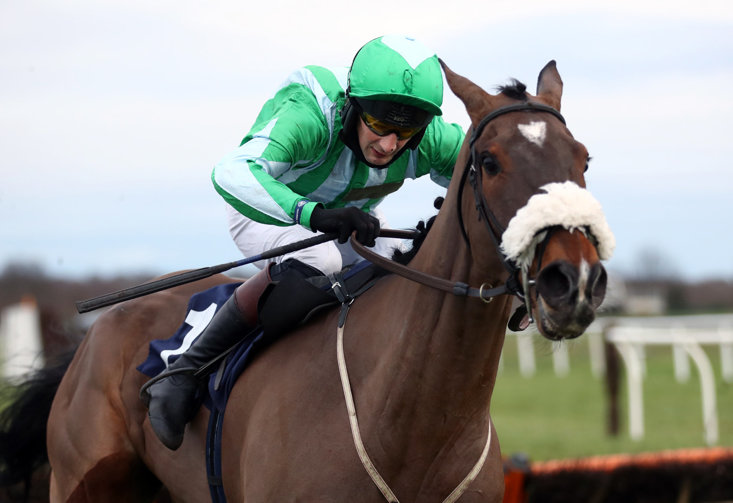 Edwardstone is worth a try stepping up in trip now he settles much better than in his novice years, while Press Your Luck is also an each way player after battling on well at Newbury two weeks ago, going down by a length from Paul Nicholls' useful looking Good Ball.

At a bigger price, Kateson is just 4lb higher than a course and distance success three runs ago and was not disgraced at Ascot when third on his next run. He was below par last time when too keen early, but back at Aintree he cannot be ruled out.

This looks set to be a fast run race with For Pleasure and Do Your Job in the line-up to set the pace.

That will suit Ajero, who has the hallmarks of being a horse who gets better as he tackles better company. He comfortably won a couple of novices before going back-to-back in handicaps and steps into G1 company searching for a five-timer. He has plenty of toe having won at tracks like Kempton, Ludlow and Huntingdon, so Aintree should suit him down to the ground.

Plenty of eyes will be on Dusart, who is a half-brother to Simonsig, and impressed when beating subsequent Betfair Hurdle winner Soaring Glory on his debut at Newbury. That was at the beginning of November and has clearly had issues since, so his wellbeing is taken on trust. He falls into the ‘could be anything’ category but is priced accordingly.

I will side with ANY NEWS, again for Neil Mulholland and Sam Twiston-Davies in the plate. He was unlucky to unseat his rider at Kelso when just propping on landing at halfway. He was sent off just 3/1 there to beat the impressive My Drogo and won very easily at another left-handed sharp track in Bangor on his second start. He can be forgiven a narrow defeat at Cheltenham in December and a good pace at two miles should play to his strengths.

The second G1 of the day is the Mildmay Novices’ Chase over three miles and one furlong.

I am chancing SHAN BLUE bouncing back here with more suitable conditions than the last two. Two starts ago, he had everything beat in tacky Sandown ground but was outstayed up the hill by Sporting John, who hit every fence and was a remarkable winner but will not get away with that at this quicker venue.

The undulations of Cheltenham would not have suited Dan Skelton’s 7yo in the Marsh Chase when behind Chantry House. Shan Blue’s biggest asset is his jumping, and he looks the only front runner in the race, which can be a big positive around Aintree. It was a similar scenario in the Kauto Star Novices Chase on Boxing Day when he held on from The Big Breakway where the runner-up’s jumping let him down late on. He was much better at Cheltenham, but I am not sure Aintree will play to his strengths. 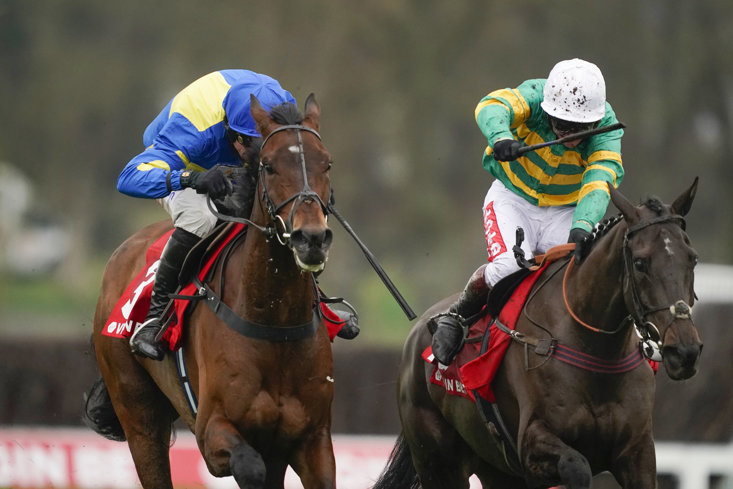 The task of Chantry House in the Marsh Chase was made simpler by the early exit of Envoi Allen but he battled on well to make it three from four over fences. He looks a bit short in the market though against some promising rivals.

Espoir De Romnay has only tasted defeat once in three chasing starts and that was behind the very progressive Royale Pagaille. He is an interesting newcomer to the Grade 1 chasing scene and is respected, but it’s Shan Blue for me.

The Melling Chase looks an absolute cracker, and this is one contest this week that I do think will go back to Ireland.

FAKIR D’OUDAIRIES was pulled out at Fairyhouse on Monday due to quick ground but Aintree will ensure safe ground with watering and he can finally put the run of seconds behind him to get the win he deserves. He has finished runner-up in five of his last six starts (other run was pulled up over three miles) since winning a Grade 1 in December 2019. He has form at the track when a close second in the juvenile hurdle here two years ago on similar ground to this week and had no answers to Allaho in the Ryanair Chase last time. That was still a good effort and the youngest horse in the line-up looks the one to be with.

Former Champion chaser Politilogue, who won this race in 2018, heads a long list of dangers, along with stablemate Master Tommytucker, who finished just behind Dashel Drasher in the Ascot Chase in February. Those two are closely matched but I will side with Master Tommytucker to turn that form around now his jumping issues have been ironed out.

The victory of Nuts Well in the Old Roan Chase over course and distance in November when ahead of yesterday’s Bowl runner Clondaw Castle looks very strong form and people will latch onto that, but at the age of ten he may just be caught out by the younger generation.

The Grand National fences are in action next in the Topham Chase over two and a half miles and Betfred are paying six places each way.

Willie Mullins won the race in 2019 with the progressive Cadmuim and saddles a veteran this time in Livelovelaugh. The 11yo is consistent and has been placed in two big field Leopardstown handicaps the last twice and did finish the course when eleventh behind Tiger Roll two years ago but he has won just once from eighteen starts over fences.

Morning Vicar was an ante-post mover for this contest and on his win at Newbury in November it is easy to see why. Two and a half miles on good ground there saw him run out a good winner and he is just 4lb higher here after finishing well beaten on soft ground at Sandown and well held in the Kim Muir over three miles two furlongs at Cheltenham. He is trained by Nicky Henderson who won this on three successive occasions between 2013-15.

Modus was third in the Grand Sefton over course and distance in December off the same mark and is a talented but quirky character which this test seems to suit. He won at Aintree on the conventional course in November too and I expect him to go well, but the one I really like is TWO FOR GOLD for Kim Bailey. This has always been his target since a gallant win at Warwick over this trip in February from Aso and he ran very well behind Cloth Cap over a trip that stretches him at Kelso. Back to two and a half miles, I expect a positive ride from David Bass on ground that will suit and expect him to play a role in the finish. 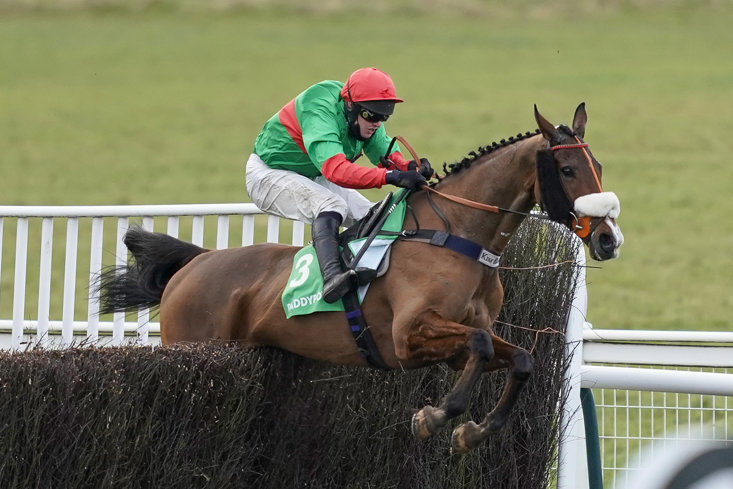 There are plenty other with chances in such a wide open contest with Senior Citizen running well in these conditions at Newbury while Precious Cargo also represents Nicky Henderson and chased home Master Tommytucker in a match at Huntingdon.

The Sefton Novices Hurdle is for stayers of the future and is a bit less demanding than the Cheltenham version. It has a solid roll of honour with Champ, Santini and Thistlecrack amongst its recent winners.

Nicky Henderson has won three of the last six running’s and saddles two here in Gallyhill and Bothwell Bridge. Both were debut winners over timber before being beaten next time but with such a great trainer record in the race, they have to be considered.

Favourite though is BRAVEMANSGAME who may have just bumped into something very special when behind Bob Ollinger and Gaillard Du Mesnil at Cheltenham and that is the best form coming into this race. He was so impressive in the Challow Hurdle over Christmas, has won on good ground previously and represents the in-form Paul Nicholls stable. The last three winners of this race had all run at Cheltenham too so that is not of any concern.

Cape Gentleman is also a very interesting contender. He won the Irish Cesarewitch on the flat and over two and a half miles on hurdles debut. He never ran any sort of race at the Dublin Racing Festival but battled on well to win over two miles at Kempton. Emmet Mullins is a shrewd operator and will be popular with Rachel Blackmore aboard.

The lucky last on Friday is for the future stars of the saddle with twenty-two runners set to head to post in a very competitive handicap hurdle.

Copperless has the hallmarks of a well handicapped horse after his win at Taunton seventeen days ago. He travelled strongly that day and found plenty to see off his market rival and his young pilot has ridden ten winners over hurdles. He has been well found in the market though.

Tomorrow Mystery and Camprond are both last time out winners owned by JP McManus who will be popular, but I will chance LEONCAVALLO. He travelled strongly in the Martin Pipe at Cheltenham but just failed to see it out up the hill late on. The drop back in trip will suit as will being dropped 2lb.

The hat-trick seeking The Widdow Maker and Paul Nicholls’ Wild Max are also considered while at a much bigger price, Rowland Ward still looks well treated and a decent ground fast two miles should play to his strengths. He can run well at a big price under one of the most experienced jockeys.