Anyone who has watched the excellent documentary series Take Us Home: Leeds United will know that Pontus Jansson was a huge character in the dressing room at Elland Road last season.

Take Us Home, produced by Leeds-based film company The City Talking and Eleven Sports and screened on Amazon Prime, follows Marcelo Bielsa's side everywhere throughout the 2018-19 campaign and Jansson, not surprisingly, features prominently.

Tonight, the Sweden international defender makes his first return to Leeds since being sold to Brentford in the summer for around £5.5million.

Leeds fans have spent the past couple of days debating on social media what kind of reception Jansson deserves, but there can be no denying the impact he made during his time at Elland Road.

Eyebrows were raised at his departure six weeks ago, but Bielsa is all about the collective and felt that a man he rated as Leeds' "best player last season" simply had to go.

Jansson's ability to defend, coupled with his ball-playing skills and eye for goal, saw him emerge as one one of the best centre-backs in the Championship since arriving from Torino in the summer of 2016.

Nevertheless, the imposing Swede can be uncompromising and belligerent and infamously defied Bielsa during the final home game of the regular season against Aston Villa.

“Jansson didn’t want to obey the indication I gave,” said Bielsa afterwards. “That diminishes my authority and I don’t know what the consequences are when you lose respect from a player. He didn’t want to give up something that we had worked so hard to reach.”

Even in the final episode of Take Us Home, Jansson remains unmoved about the Villa controversy.

At the training ground, Kalvin Phillips asks Jansson whether Leeds should have allowed them to equalise.

"Absolutely not!" is Jansson's response, albeit slightly tongue in cheek.

There were also issues over when Jansson would return to the club after his summer holidays and, in the end, Bielsa decided a parting of the ways was neccessary.

Leeds fans love a cult figure who wears his heart on his sleeve - think the great Billy Bremner to Vinnie Jones to David Batty - and Jansson's fist-pumping to the fans and all-action style saw him enjoy an outstanding debut campaign under Garry Monk.

"Oh, Pontus Jansson's magic, he wears a magic hat, and if you throw a brick at him he'll head the f***er back," was often aired during a season which saw Leeds narrowly miss out on the play-offs.

Despite being in the top six for much of the campaign, Leeds finished seventh and Monk quit Elland Road as Andrea Radrizzani took full control.

The following season saw Leeds began brightly under Thomas Christiansen before fading away. He got sacked and his replacement, Paul Heckingbottom, suffered the same fate a few months later.
But last season, Leeds raised the bar beyond all recognition under Bielsa. Jansson, who started last season on the bench, soon reclaimed his place in the team and helped the Whites to their most memorable season for years.
Jansson returned late for pre-season having featured for Sweden at the World Cup but, when Gaetano Berardi got injured, Jansson was back in the team.

Pontus Jansson
@PJansson5
What an important win away from home. We fought hard for 90+ min and going back home with such a nice feeling! 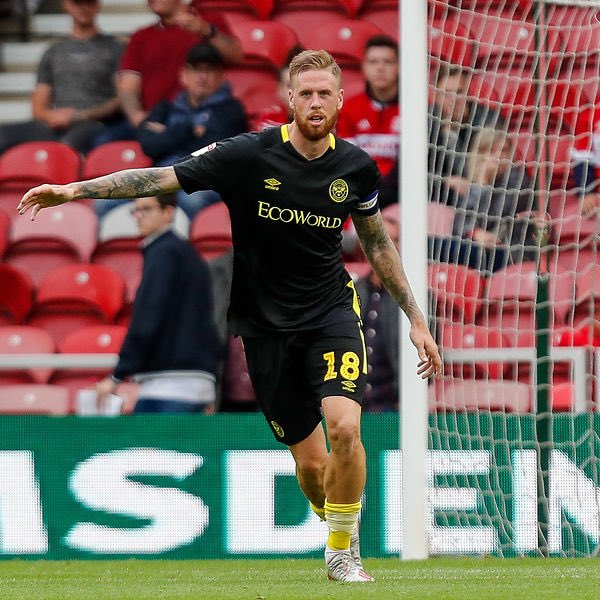 The Swede said of Bielsa's demanding approach during episode two of Take Us Home: "From day one, Marcelo said ‘if you don’t accept what we are going to do you have to leave, you have to find something else’.

"All the players who are still with us now, they accepted it from day one."

Jansson and captain Liam Cooper forged a fine partnership at the heart of Leeds' defence but they missed out on automatic promotion and failed in the play-offs against Derby.

Jansson was an unused substitute in the second leg at Elland Road, with Bielsa preferring Berardi and Cooper, and the seeds had been sown for his departure.

Despite everything, Jansson should get a fine reception tonight and he remains close friends with the likes of Berardi, Ezgjan Alioski and Pablo Hernandez.

In episode five of Take Us Home, Jansson, Berardi and Alioski are sat around a table in a coffee shop discussing Leeds' promotion challenge as it enters the final straight. Jansson tells them: "You two, you are my two best friends in the team. But you Bera, you are like my big brother that I’m looking up to and I feel safe when you are around the team. You have changed me as a person also, you know."

Alioski chips in: "Pontus is a special guy.  I see him like a big brother and he brings a lot of spirit."

Berardi adds: "I could see at the beginning he was a really good guy.  That’s why I tried from the beginning to help him. Now, I will go whole way with him."

Of course, Leeds did not go the whole way and are now in their 16th successive year outside of the top flight.

Both parties have since moved on and Jansson has been made captain at Brentford while on-loan Brighton defender Ben White looks an astute replacement for him at Leeds.

Regardless of the outcome this evening, even Bielsa admitted yesterday that Jansson's efforts in the white jersey should be recognised.

“He deserves to be received with the right reception for him,” said Bielsa of Jansson. “He was the best player of the team last season. I cannot talk about the previous years because I wasn’t working with him but he did a high level last season.

“I appreciate what he gave to the team. I think that the fans are going to be fair and they are going to recognise what Jansson did here for the club.”

Amazon Prime Video Sport
@primevideosport
L I M B S
Relive the highs and lows of @LUFC's promotion push on #PrimeVideo
#TakeUsHome
133
1383
x
Suggested Searches:
Tyson Fury
Manchester United
Marcus Rashford
Lewis Hamilton
F1
Air Jordan
More
football
Aston Villa Have Their House In Order, Newcastle’s Is Crumbling...
If the Premier League was a building site, Aston Villa’s terrace would be taking shape nicely. [ ... ]
football
Diogo Jota’s Return Is The Light At The End Of The Tunnel For...
Jurgen Klopp must have some regrets right now. More so than ever before, his decision to play Diogo [ ... ]
football
Forever Lauded For Their Attacking Prowess, Man City Are Shining...
Stereotypes and reputations can be hard to shift. Pep Guardiola’s teams play beautiful, expansive [ ... ]
football
Rooney’s Experience As A Wonderkid Will Pay Dividends For Derby’s...
“Thomas and Wayne, they were shooting fireworks at each other,” recalled David Moyes, on [ ... ]
football
From Cantona’s Collar To Robbing Shearer’s Minibar, Razor’s...
Millwall, Saints, Spurs, Liverpool, West Ham. I’m A Celeb, Wife Swap, The Jeremy Kyle Show, Big [ ... ]
football
The Star-Studded Harry Redknapp Podcast Hoping To Raise The...
Get the jam roly polys out of the oven, wind your window down and let all and sundry know that there [ ... ]
football
Get A Core Like CR7 With Two Of Cristiano Ronaldo’s Quick-Hit...
As the winner of 30 major trophies, five Ballon d’Ors and someone who is widely recognised as [ ... ]
football
Finally! The Definitive Book Separating Fact From Fiction In...
The branches of the great royal oak that is football are endless. A continuous weaving narrative, rich [ ... ]
football
British Football’s Greatest Grounds, The Book Celebrating Every...
Great Britain no longer predominantly finds its religion in churches and cathedrals. It’s more [ ... ]
football
Cracking Christmas Gift Ideas For The Fanatical Football Fan...
The footy-mad person you’re buying for this Christmas has probably been kitted out since the summer, [ ... ]
football
Stocking Filler! Believe Us: How Klopp Transformed Liverpool...
Few journalists have followed Liverpool so fervently and passionately over the past several years as [ ... ]
football
With A Wealth Of Talent, The Players Podcast Flips The Script...
A collaboration between BBC Sport and Copa90? Yes please! Totally devoted to the ever burgeoning, ever [ ... ]
football
Jose Mourinho And Mikel Arteta Playing On Reputations Ahead...
It’s fair to say that the reputations of Tottenham boss Jose Mourinho and Arsenal manager Mikel [ ... ]
football
Gareth Southgate Looks To Inspire Next Generation Of Footballers...
There was a time. A most glorious time. Smiling faces congregated closely together in large, open spaces. [ ... ]
football
Andy Cole Shoots From The Hip In His No Holds Barred Autobiography,...
There may be a plethora of sports books being released this winter ahead of the festive season, but [ ... ]
football
Jamie Carragher’s Greatest Games Is The Book Football Fanatics...
Over the past seven years through his stellar television punditry work, one-club man Jamie Carragher [ ... ]
football
The Opportunities Given To Players By Southgate Is Paying Dividends...
Ok, so the Republic of Ireland didn’t lay a glove on them. But England’s performance in [ ... ]
football
Gomez Injury Latest Reminder Football's Eating Itself Whole...
Just when Liverpool thought their defensive crisis couldn’t get any worse, along came the news [ ... ]
football
The New adidas Podcast Putting Premier League Players Through...
Aiming to put some of the fastest players in football through their paces, host Ben Haines has recruited [ ... ]
football
Jurgen Klopp Has To Pick Jota Over Firmino And Not Just Because...
“Football is a simple game made complicated by people who should know better.” Fine words, [ ... ]
football
Goals And Punctures! The Biking Passion And YouTube Vids Of...
The general consensus, whether rightly or wrongly, is that footballers are all about the beautiful game. [ ... ]
football
Schoolboy Defending Leaves Man Utd And Solskjaer Facing The...
It happened again. It keeps happening. Manchester United came up against a well-drilled opposition who [ ... ]
football
Jurgen Klopp's Ruthlessness Has Allowed Diogo Jota To Become...
He’d netted goals in Liverpool’s previous three fixtures, including second-half winners [ ... ]
football
The Fascinating Book That Lifts The Lid On Brazil's Glorious...
“If we had won that game, football would have been different. That defeat for Brazil was not beneficial [ ... ]
football
Covid Can't Stop Ronaldo, Five More Weekend Sport Stories You...
Cristiano Ronaldo is still brilliant, Mercedes are still untouchable and Manchester City are still FA [ ... ]
football
Man United vs Arsenal's Narrative Has Changed But The Fixture...
Manchester United versus Arsenal. You read the fixture and what do you think of? Roy Keane and Patrick [ ... ]
football
Marcus Rashford Captured Our Imagination, He’s Sports Personality...
There’s a storm a brewin’. A Sports Personality of the Year size storm. It might seem like [ ... ]
football
‘The Red Apprentice’ Explores Solskjaer’s Surprising Path To...
To many, Ole Gunnar Solskjaer was a shock choice to relieve Jose Mourinho as manager of Manchester United, [ ... ]
football
Dazzling In Europe Again, But It's Time For Man Utd To Up Their...
In many ways it was a typical Manchester United win under Ole Gunnar Solskjaer, and yet it was also [ ... ]
football
Liverpool Need To Show What They're Made Of During Injury Crisis
Now we’re really going to find out what the Premier League champions are made of. Liverpool’s [ ... ]