England had no trouble sweeping aside Albania to take a huge step towards World Cup qualification, winning 5-0 in front of 80,000 fans at Wembley. Harry Kane notched his fourth England hat-trick in an electrifying first-half that saw the Three Lions bag all five of their goals.

The game started in feisty fashion, with full-blooded tackles flying in on both sides. There were casualties of this, with Keidi Bare being substituted off after injuring himself in a penalty-box challenge on Raheem Sterling. The visitors also lost Marash Kumbulla, who was replaced by Qazim Laci.

Their night would quickly go from bad to worse, as England settled into an attacking rhythm. Harry Maguire headed the opener and celebrated with the passion of a man answering back months of criticism. Many had questioned the Manchester United man’s inclusion, but he almost immediately justified his selection with a well-taken goal.

Reece James launched a marauding dribble which saw him eventually dispossessed. The loose ball found its way to Jordan Henderson, who exchanged with Phil Foden before steering a cross in for Kane to nod home. Henderson employed the same strategy again for England’s third, this time swapping passes with Kane and taking the chance himself. The Liverpool midfielder slalomed into the box with excellent close control, before netting the second goal of his England career.

This World Cup qualifier was already taking on the appearance of a thrashing, and Gareth Southgate’s side refused to let up. A perfectly timed Kane run saw the Tottenham Hotspur man grab his second, latching onto a Raheem Sterling through ball and finishing from a tight angle. His finest effort of a historic night was a wonderfully inventive scissors kick from a corner to clinch his hat-trick, and put England 5-0 up. Kane now holds the record for most England goals scored in competitive games with 38, surpassing Wayne Rooney’s 35. 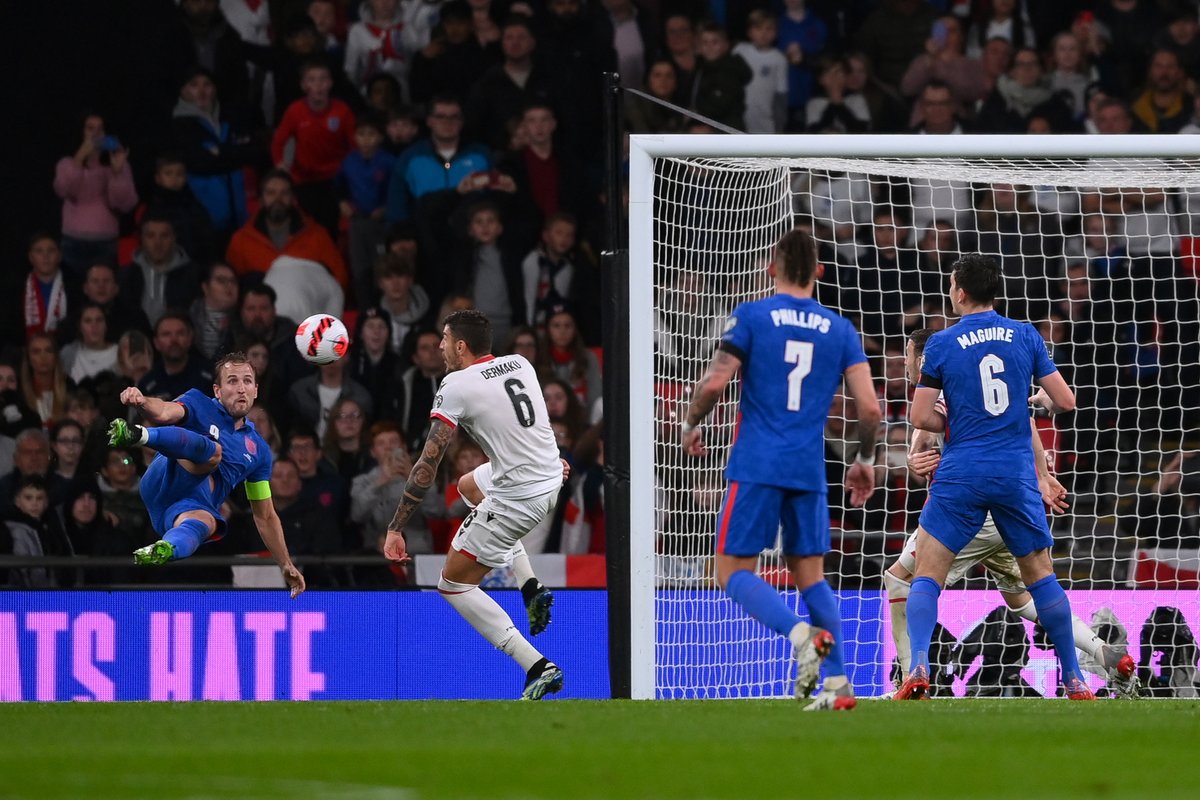 The second half was a comedown from the majestic first, with England comfortable rather than lethal. Southgate took the opportunity to shuffle his pack, and give some of his substitutes game time. Jude Bellingham, Tammy Abraham and Jack Grealish came on in place of Kalvin Phillips, Kane and Foden. Shortly after their introduction, Laci’s attempt at an acrobatic finish saw his boot collide with James’ head, sending the Chelsea full back into a nasty clash with John Stones. Both men were treated for a lengthy period, and thankfully returned to their feet and continued playing. James was replaced soon after as a precaution, with Trent Alexander-Arnold coming on in his place. Emile Smith Rowe was also handed an England debut in place of Raheem Sterling.

The game took on the sedate look of an international friendly. England were content with their dominance, and Albania had the will, but crucially not the skill, to stop them. While it would have been a real thrill to see England turn the screw, it was hard to begrudge them a stroll after the scintillating first half display.

England have one foot in the World Cup, but there is still work to do. Bottom-placed San Marino await on Monday, in a game where a point will guarantee a place in Qatar next winter. Without wishing to tempt fate, one would hope Southgate’s side can do a bit better than that against a side who have lost all eight qualifiers.