Football
News
The defender comes up against Real Madrid with Liverpool in the Champions League
Elliott Bretland
13:30, 06 Apr 2021

It was gloriously clever quick-thinking. Trent Alexander-Arnold cheekily took a quick corner catching Barcelona off guard and Divock Origi converted as Gerard Pique and Marc-Andre Ter Stegen were completely flummoxed. It was the right-wing back’s presence of mind to hit his set-piece so swiftly which completed Liverpool’s incredible aggregate comeback victory over Barca as they went onto lift the Champions League in 2019.

It was that night at Anfield that Alexander-Arnold showed he was the real deal. Already at 22, he has won the European Cup and the Premier League title. However, this month, he trails Kyle Walker, Kieran Trippier and Reece James, according to England boss Gareth Southgate at least. The Reds defender missed out on this month’s Three Lions squad, with the Manchester City, Atletico Madrid and Chelsea full-backs all preferred.

Ask any Liverpool supporter about Alexander-Arnold’s omission from the team and you will be met with bemusement and bewilderment. Watching him week in, week out, they see his talent and will have a strong argument that he is one of the best players on the planet in his position. That view will be shared even by fans of other clubs, for TAA is so highly rated.

He almost plays as a right midfielder, such is his prowess at getting forward and boasts supreme a passing range. There are some doubts out there over him defensively but he is certainly capable of playing a massive part in any future England success. 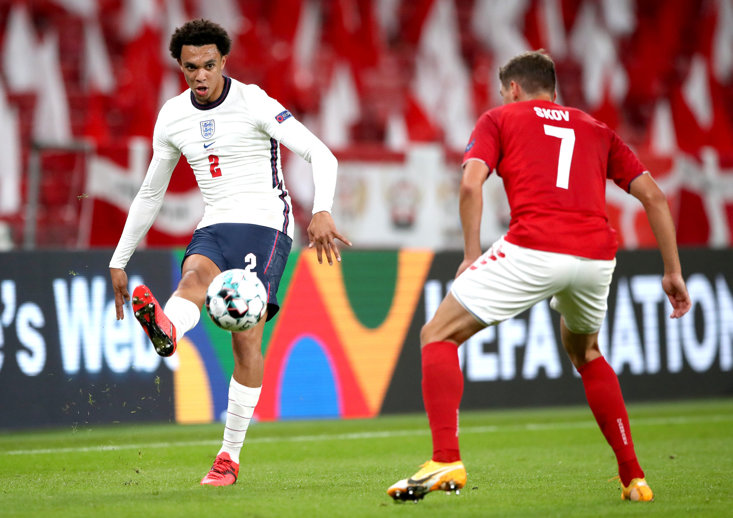 Asked why Southgate might have decided calling him up ahead of the Euros, Gary Neville, speaking on Monday Night Football, said he would select him for the tournament but also suggested, “I’m saying to myself: who are England going to be playing? Germany. Belgium. France. Portugal. Who is he going to be playing against? Hazard. Mbappe. Sane. Jota. Ronaldo.

“Who do they want to play against? James, Walker or Trent? They’ll say: ‘I’ll let Trent go forward, he’ll leave space in behind me. I’ll have Trent.’

“We have got five right-backs and Gareth Southgate is in a position whereby, it’s unbelievable. We’ve got that many talented right-backs to pick from. I can see the conundrum and the challenges that Southgate has got.”

Fellow pundit and former Liverpool star Jamie Carragher said, “He’s a unique talent. He’s not the same as any other full-back. Most full-backs, even the attacking ones, the greatest ones going forward…it is up and down in a straight line.

On Tuesday night, Liverpool face Real Madrid in the Champions League quarter-finals and Alexander-Arnold has the opportunity to shine on the biggest stage once again. Coming up against the likes of Karim Benzema and Luka Madrid is the ultimate test and, as he did against Barcelona, TAA will be confident of excelling again against Spain’s best.

However, two of the right-backs ahead of him right now internationally, are also playing on Europe’s biggest stage this week. Walker, seen as the experienced head, faces Borussia Dortmund with Manchester City while James and Chelsea take on Porto. Trippier, meanwhile, is top of La Liga with Atletico.

So, that’s the complex issue Southgate is contending with. Yes, Alexander-Arnold is a gifted player but his form has dipped this season, compared to his previous astronomical standards as the Reds have struggled for form and there is serious competition in his position. He hadn’t risen levels above his rivals this campaign.

Perhaps this is just a case of bad timing for Alexander-Arnold. Fifteen years ago, England managers had to choose which of Steven Gerrard, Frank Lampard and Paul Scholes filled the two central midfield positions. It got to the point where the latter was deployed on the left.

England, now, are blessed for right-backs and whichever way Southgate’s selection falls, a quality player will miss out. Right now, it seems that player will be Alexander-Arnold. All he can do is excel with Liverpool, show he can shine against royalty like Real Madrid, pass the test and maybe Southgate will then think differently.