Football
News
After injuries caused her to miss the last two tournaments, Popp has made up for lost time
Simon Lillicrap
15:00, 30 Jul 2022

Butterfly Effect. Definition: the phenomenon whereby a minute localised change in a complex system can have large effects elsewhere. Had a bloke in China not eaten a bat at a Wuhan live food market - Alexandra Popp wouldn’t have ever made an appearance at a European Championship and it's likely that Germany wouldn’t have made it to the final.

That of course is a slightly dodgy nod to the fact that had Covid-19 not happened, the European Championship would have taken place last summer and Popp would have been left on the sidelines, having picked up a serious injury in April 2021.

That would have marked her third consecutive missed European Championships, after she was heartbreakingly injured in both 2013 and 2017. A torn ligament forced her out nine years ago after a season which saw her win the treble with Wolfsburg, and she watched on as Germany won their sixth successive crown.

She played at the 2015 World Cup and won Olympic gold with her country in 2016, but 2017 saw her tear her meniscus and lateral ligament which once again ruled her out of the summer tournament. This time her absence would prove critical to a Germany side that had become reliant on her immense ability. For the first time in 22 years, the Germans didn’t win the tournament. They didn’t even make the final as they were dumped out at the quarter-final stage.

But fate has a way of intervening at key moments during a footballer’s career. Covid-19 may have been a global and economic disaster, but for Popp, it has importantly given her time to recover. She needed a year with no pressure, but it has been her mindset that has impressed most, even after getting Covid in the pre-tournament training camp.

"It's no use thinking about it for years, dwelling on it, so to speak,” she told German broadcaster Deutsche Welle. “I have to accept things as they are. I have also met it head on with a fighting spirit by standing right here and being able to play in this European Championship. I'm very proud of this at the moment."

OptaJoe
@OptaJoe
100 - Germany's opener through Alexandra Popp was their 100th goal at the UEFA Women's European Championship, making them the first side to reach a century of goals in the competition. Centurions. #WEURO2022 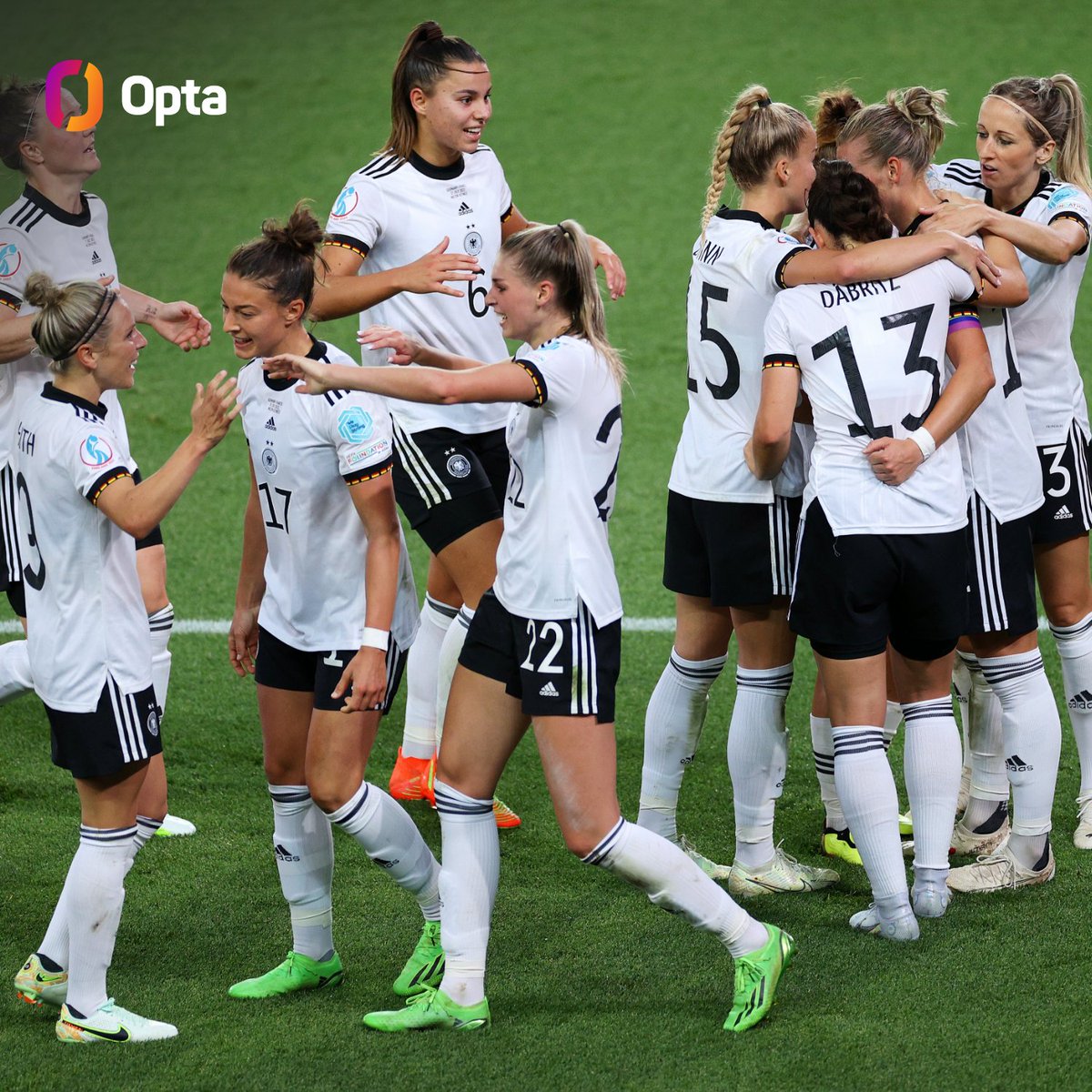 Given the Covid issues, she began the opening game from the bench but made an instant impact after coming on against Denmark on the hour-mark. She showed the first glimpse of her aerial prowess by opening her Euros account with a fantastic header after a Sydney Lohmann cross.

From that moment, she has been utterly indispensable. She took the captain's armband for the second game and ended the group stage with three goals from three games. In the quarter-final against Austria she bagged again before her record-breaking bullet header in the semi-final against France.

She’d already volleyed in the first but it was the second goal that summed up Popp as a player. In a tense and tight encounter, with the scores level at 1-1, Germany needed their star to produce. With the ball about to be crossed in from the right, she pulled back out of the six yard-area, away from the back four. Then, as the ball was struck, she attacked it with vigour and power, leaping above the 6ft 2in defensive giant Wendie Renard to win the game with another phenomenal header.

That movement in the box won the semi-final for Germany but also gave Popp a record-breaking goal. She became the first woman in history to score in five consecutive European Championship games and now she is level on six tournament goals with England’s Beth Mead in the race for the Golden Boot.

The final on Sunday will decide who lifts that individual accolade, but far more importantly, we will see either England or Germany become champions of Europe. Fate has given Popp an unlikely opportunity, but it's one she has grasped with both hands. If she lifts the trophy on Sunday, it will have been written in the stars.