Arsenal moved back into the Premier League top ten on Sunday with a 3-0 victory over Sheffield United courtesy of goals from Alexandre Lacazette and Gabriel Martinelli.

The Gunners went ahead on 33 minutes when striker Lacazette finished off a stunning team move. Mikel Arteta’s men patiently moved the ball from left to right before it was played to Dani Ceballos who deftly flicked into the path of the Frenchman who placed it into the back of the net.

Arsenal then doubled their advantage on 71 minutes after Nicolas Pepe capitalised on sloppy Sheffield United passing the back. The winger pounced and worked a shot which Aaron Ramsdale could only palm away for Martinelli to gobble up.

Lacazette got his brace five minutes from the end to earn the north Londoners a well-deserved three points, latching on to Thomas Partey's through ball and breaking free past the Sheffield United backline before slotting the ball past the onrushing goalkeeper. 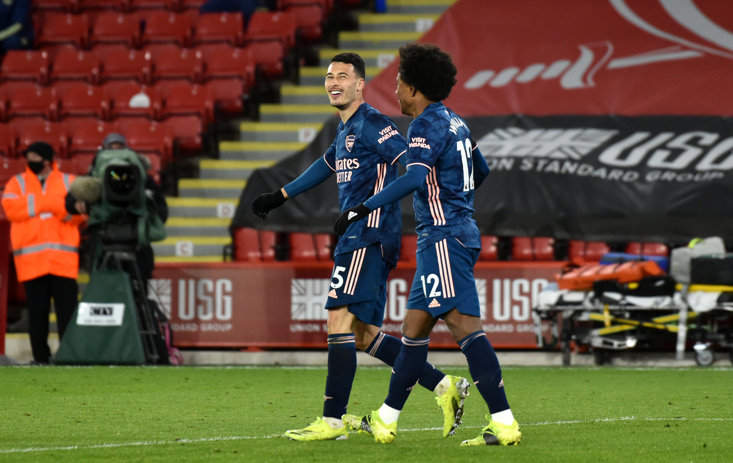 Defeat for the Blades moved them another giant step closed to the drop zone and, following Newcastle’s win at Burnley, they are now 18 points from safety with seven games remaining and only a miracle could save them at this point following another abject display and a 25th league defeat of the campaign.

For Arsenal, it was the perfect response to the ‘big slap in the face’ which they suffered in last week’s 3-0 loss at home to Liverpool before conceding a late equaliser against Slavia Prague in the Europa League on Thursday.

It was an important match for Martinelli too. Having not started since January and making only 13 appearances this season due to injury issues and a lack of opportunities, he took his chance well in a week when Arteta insisted the 19-year-old has a bright future at The Emirates. He was full of running, full of energy and was desperate for the ball, hunting it down at every turn.

“Gabi is doing really well,” Arteta had told reporters. “He is doing better every day, he is getting the right development.

"We have to be a little bit patient with him but he has a bright future at the club and he will have all the opportunities that he needs to show us how good he is and the career he can have with us."

Martinelli was seemingly boosted and will be hoping to feature again when Arsenal host strugglers Fulham next Sunday.

Lacazette, too, was glad to get on the scoresheet and told BT Sport, "It was important we won and it was a great day for us. I missed an easy chance on Thursday (in the first leg against Slavia) and so I wanted to score.

"The confidence was lacking a little bit. We know we have the quality but sometimes we miss a little bit at both ends of the pitch."

For a few days at least, the Gunners can enjoy this one, an impressive and much-needed victory during what has been a faltering and testing campaign.