Football
News
Jordan Rhodes' late strike on Monday has the Terriers 90 minutes away from a stunning Premier League return
Conor Keane
09:22, 17 May 2022

Hello Wembley, my old friend. That is what Huddersfield Town fans will be saying next Saturday as they travel down to the iconic stadium for their second Championship play-off final in five years. It’s all thanks to the striker who helped them gain promotion to the Championship 10 years ago, Jordan Rhodes.

The club legend scored late to seal a 1-0 victory over Luton Town and a 2-1 aggregate success at the John Smith’s Stadium on Monday night to put the Terriers just one game away from a return to the Premier League.

It has been a phenomenal season for the Yorkshire club, as it was for Luton too, and they have fully earned the position they find themselves in, even if nobody expected them to be here. When the club appointed Marcelo Bielsa’s former Leeds United assistant Carlos Corberan as their head coach from Leeds United, where Bielsa said he valued Corberan’s opinion more than his own, many wondered how he would adapt to the demands of the second tier. And while last season was concerning as they finished 20th, the style of football he was trying to implement had the potential to be devastating should everything click.

And now it has.

The Spaniard has worked tirelessly to see his vision executed successfully on the pitch, and this term has been nothing short of spectacular considering that all of their new additions  combined for a total transfer fee of £0, making their quick transformation that much more impressive. The key for them is the determination each and every player shows on the pitch, in and out of possession. Their team spirit has carried them a long way this year too. An incredible 17-game unbeaten run from November to March helped put them in the perfect position to seal a play-off place in the final weeks of the season, and the fact they have now lost just three of their last 31 games in all competitions - incredible. 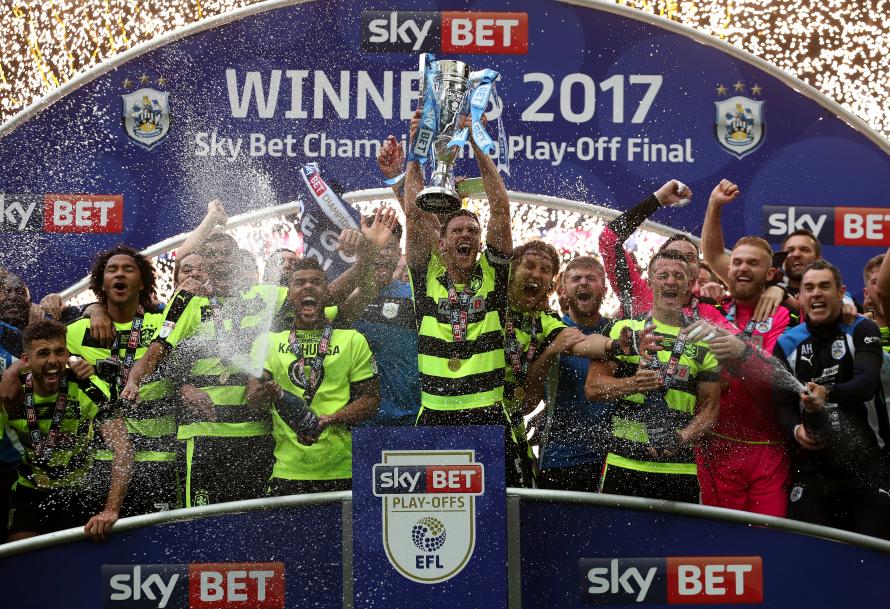 It’s fair to say that the Terriers over the course of the two legs were not at their best and the Hatters looked more threatening when they had the ball, but Corberan’s men were able to hold firm and keep them out. Goalkeeper Lee Nicholls may not have been the recognised match-winner but his heroics in the periods when his side were a bit slow out the blocks to close Luton down were just as important as Rhodes’ strike. Duane Holmes and Lewis O’Brien were energetic in midfield, always looking to make things happen, and the latter showed his commitment to the cause when he made a sprinting run in the latter stages of the game as if it was the very first minute.

Rhodes wasn’t even in the starting line-up on the night, having to come on when starting forward Danny Ward was forced off, but while there was an instant lack of pace at the front of the pitch, there were considerable years of experience and one of the most proven goalscorers the English Football League has ever seen.

His record may not have been as prolific at Sheffield Wednesday or Middlesbrough compared to his first stint with the Terriers, where he scored 40 goals in his final campaign, or at Blackburn Rovers. But if you give him a chance in front of goal you’d still back him to score. That is exactly what happened on Monday with that all-important goal.

Corberan should be praised for his in-game management, as his substitutions proved game-changing and two of them were involved in the decisive goal. Sorba Thomas put in the inviting cross into the far post and, on the stretch, Rhodes was quick to react and divert the ball home to book the Terriers’ place in next weekend’s £150 million showpiece.

Huddersfield are no strangers to the Premier League, having spent two seasons in the top-flight between 2017 and 2019, but the fact they are back within 90 minutes of the top flight this soon comes down to their inspirational head coach.