Football
News
The Paraguayan has struggled to find form since switching to the North East
Jack Porter
09:01, 30 Nov 2019

Miguel Almiron joined Newcastle United on deadline day of the January 2019 transfer window as their £20million record-signing. The move finally beat the ignominious, long-held record of Michael Owen, who arrived in 2005 for £16m but whose poor return came to epitomise a sorry period in the Magpies distinguished history.

Almiron has not scored a goal in professional club football in over a year. Last November is when he last hit the back of the net, in a 3-1 win for Atlanta United over New York City FC in the MLS Cup Playoffs.

Ahead of a Saturday lunchtime meeting with incumbent EPL champions Manchester City, Almiron has had more shots without scoring than any other Premier League player this season with 22 - that’s three ahead of Sheffield United’s David McGoldrick.

Across the back end of last season and into the first half of the 2019/20 campaign, the 25-year-old attacker has now gone a total of 23 games to produce his first goal in the competition. None of his 41 shots have ever made the difference.

To exacerbate matters, the ‘playmaker’ has had zero goal involvement for Newcastle, failing to even produce a single assist since becoming a Magpie. His last contribution for a club teammate goes back even further than that match against New York City - you'll have to look at the 2-0 win against Real Salt Lake on September 23 2018 for that one.

But is it all down to the Paraguayan? Currently, Almiron exists in a triptych with the £20million Allan Saint-Maximin and the £40million record signing Joelinton. Bruce wasn’t even the man who brought him to St. James’ Park. That was under the previous regime of Rafael Benitez, a man who led them to a Championship title and a stellar 10th-place finish in the top tier.

His successor Bruce is privileged to call upon something the Spaniard was never even remotely afforded - an £80million strikeforce at his disposal. 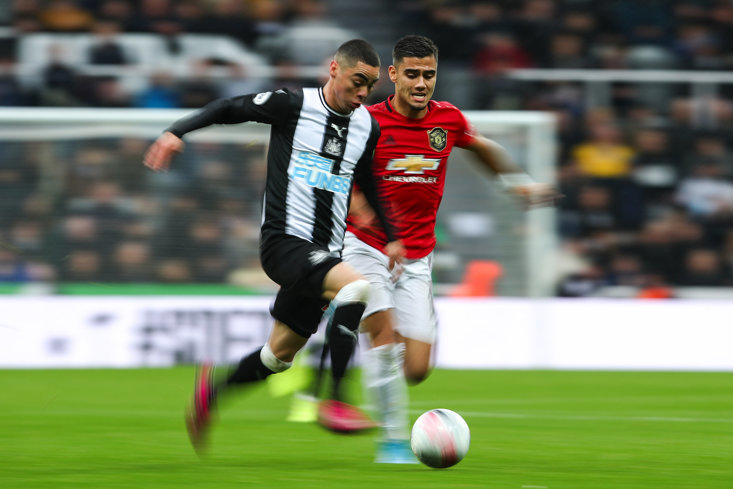 This season, the terrible trinity have registered just one league goal between them. Newcastle’s top goalscorers for the campaign are midfielder Jonjo Shelvey and centre-back Ciaran Clark with two goals apiece.

Almiron’s performances in his last season in the US brought Atlanta United their first-ever MLS Cup in the month before his move to Tyneside. Almiron contributed 13 goals to the campaign and gained the second of his two appearances in the MLS Team of the Year.

In September, Almiron latched onto an excellent cross to show a striker's instinct and produce his first international goal. Morale-building, he scored his second - the decisive strike in a 1-0 win - earlier in November in a friendly against Luxembourg.

And yet in his next game, Newcastle’s last fixture, against Aston Villa, Almiron was substituted for Christian Atsu with just over 10 minutes to go, his performance having drawn elevated levels of scrutiny. The football pundit Chris Sutton described his ‘super-hopeless’ presence as almost performing ‘with a man down’.

Almiron has started in every Premier League game for Newcastle United this season. A game against Pep Guardiola’s Manchester City on Saturday doesn’t seem to be the most ample opportunity for confidence-boosting. Instead, it could be a chance to rest the Paraguayan, removing him from the limelight and allowing the winger to recoup. Their subsequent games are important fixtures against the cut-throat Sheffield United and struggling Southampton.

Contribution to a game shouldn't be based solely on goals and assists, and undoubtedly Almiron provides a stellar work-rate. He has earned the respect of many member of the Toon. His manner off the pitch is one of a consummate professional

At Atlanta, he usually operated in the hole behind a two-pronged attack. At Newcastle, he plays on the right-wing in support of Joelinton where he is evidently ineffective, unable to exhibit his neat clinical passing range or unleash counter-attacks through the middle.

Almiron requires time, patience, and potentially, a manager who will get this Magpie attack flying.